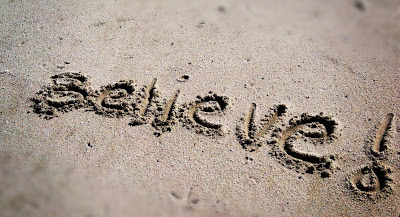 
The actual healing of the royal official's son isn't all that dramatic. The sick boy is fifteen miles away in Capernaum. Jesus never lays eyes on him. He doesn't pray for the boy, lay hands on him, command an unclean spirit to depart from him. In fact, there is only one indication that Jesus does anything at all. The official says to Jesus, “Sir, come down before my child dies.” Jesus says to him, “You may go; your son will live.” That's it. “Your son will live” and the boy is healed. Fifteen miles away. Now, the next part of the story is rather dramatic. John writes, “The man believed what Jesus said to him and left.” The man believes. On what evidence? For what reason? He believes that his sick child has been healed simply b/c Jesus tells him so. This is interesting b/c Jesus' response to the official's initial request is: “Unless you people see signs and wonders, you will not believe.” Impatient with worry, the official then begs Jesus to hurry south. And then the long-distance healing is performed. The official neither sees nor hears a sign nor a wonder. Yet, he believes. He takes Jesus' word as true.

The royal official believes that his son has been healed even before he sets out for home in Capernaum. His faith in Christ's report is confirmed by his slaves who meet him on the road. They report that the boy's fever broke at 1pm the day before. The moment Jesus said, “You may go; your son will live.” The drama of this story multiplies when we learn that “he and his whole household came to believe.” This seems like an odd comment to make. Didn't we say that the official already believed? Yes, but he believed Jesus' report that his son was healed. Now, with the testimony of his slaves, the official believes in Christ himself. And when the official tells the story of his visit with Jesus, his whole household comes to believe in Christ as well. This is how the faith is spread. Believe on the word of Jesus. See his mighty deeds in your life. And then give witness to his words and deeds so that others might come to believe as well. Do we need to see signs and wonders in order to believe? Apparently not. The official's slaves knew that the boy was healed, but they didn't know that he had been healed by a word from Jesus. They believed on the testimony of their master. And b/c they believed, they too received a sign of eternal life through Christ.

So, what are we to make of all this? One rather obvious point is that we do not need to run after signs and wonders to have our faith in Christ confirmed. Such unusual events may or may not happen from time to time, but one thing is clear: we don't need them in order to believe. We are called upon to believe the Gospel through the testimony of the apostles and by our innate desire to be perfected in God through Christ. When Christ speaks, his word either rings true or it doesn't. We are either transformed or we aren't. If his word rings true and we are transformed, then we are bound to give witness to his words and deeds and bring others into right relationship with God. In other words, we become the voices of Christ, speaking his word to the world. Just as the official gives witness to his slaves and brings his whole household to belief, so we too are compelled to testify to all that God has done for us. Speaking Christ's word into the headwinds of our culture is no casual task. But a raised voice won't drown out the white noise of ignorance and bigotry. What word speaks best of Christ? The Done Word. The Word as it is Done. If you live freely in mercy, then freely grant that same mercy to anyone in need. There is no better means to heal a soul than the judicious and lavish application of forgiveness.
______________