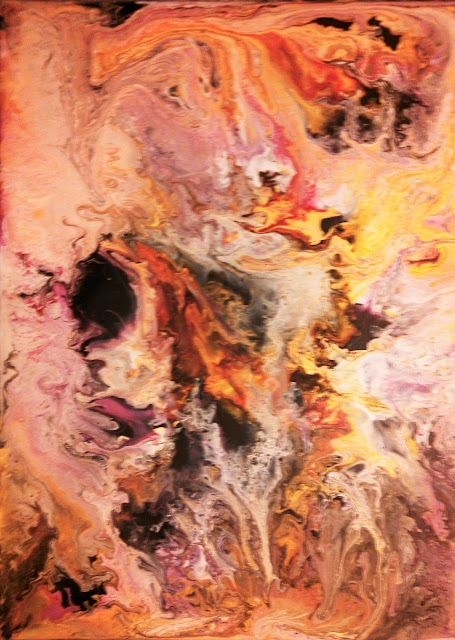 I've been experimenting with fluid paint lately. . .below is one example. Basically, I'm figuring out how the paint moves and what colors work best. 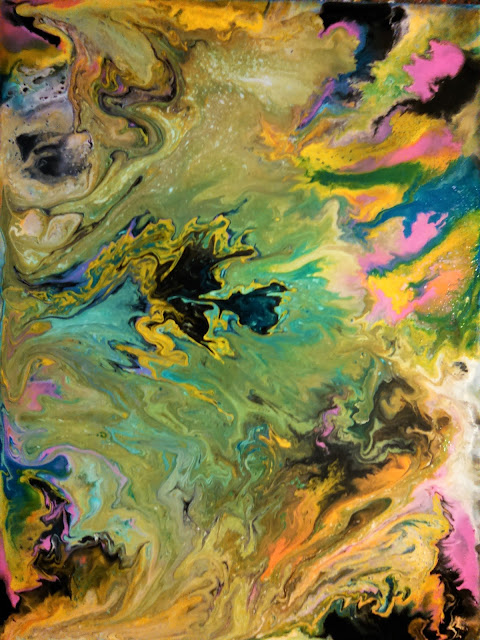 16th Week OT(M)
Fr. Philip Neri Powell, OP
St Dominic, NOLA
Up for the second time that night and headed to the bathroom in a staggering daze, I was shown a truth about my world I had never thought to question. There just about three feet from the floor, hovering in mid-air, is a small glowing object. I stare for a moment, without my glasses, in the dark, and think for just a second or two that perhaps the Lord has sent an angel to tell me something amazing. As I contemplate this greenish-yellow glow, thinking about revelations, dreams, visions, and prophecies, I am suddenly struck by the truth of what I am seeing. There it is, as plain as the shine of a full moon in October, there it is in plain view, and I realize with a nearly blinding clarity: my toothbrush glows in the dark! Then, just being me, the question arises: why would anyone think to make toothbrushes glow in the dark? Stumbling back to bed, I chuckle myself to sleep wondering what we would all look like if our teeth glowed in the dark.
Strictly speaking, my “vision” of the glowing toothbrush was a discovery not a revelation. Its discovery was accidental and has no meaning beyond what I can give it in a homily about seeking after signs of God’s presence. As a divine sign my glowing toothbrush fails what we can call here the “From Test;” that is, my toothbrush shining in the darkness on the sink cannot be said to be “from” God. And though we can rightly say that anything made is made by a creature who in turn is created by the Creator and reveals his/her Creator as a creature, we cannot say that a glowing toothbrush made by a creature reveals much about God. Signs point the way and make present that which they signify. Divine signs point the way to God and make His presence knowable to those who desire to know Him.

The scribes and Pharisees are understandably both curious and worried about Jesus’ claims to be the Son of God. They approach him and make a reasonable request, “Teacher, we wish to see a sign from you.” Traditionally, those claiming to be “sent from God” provide signs that point to God’s presence and make Him knowable. These men are educated, pious, intellectually curious, and therefore rightly seek some indication from this rabble-rousing preacher that he is who he claims to be. Show us a sign. Jesus’ response is unexpected and harsh: “An evil and unfaithful generation seeks a sign, but no sign will be given it…” We have to wonder why Jesus is being so stubborn. We know he is capable of miraculous deeds. Why not show these men what they need to see?
Jesus says that no sign will be given to them “except the sign of Jonah the prophet.” Just as Jonah was in the belly of the whale for three days and nights, so the Son of Man will be “in the heart of the earth three days and three nights.” Jonah is expelled from the whale and goes on to preach repentance to the decadent citizens of Nineveh. They repent and return to God’s favor. So Jesus too, expelled from the grave and risen from the dead, will be a sign to the scribes and Pharisees and a sign to us that Jesus is indeed who he claims to be. Jesus goes on to add that on the day of judgment, “the men of Nineveh will arise with this generation and condemn it, b/c they repented at the preaching of Jonah…” Needing no other sign than the earnest preaching of an honest prophet, the citizens of Nineveh return to God.
Living here on the edge of the end of the second decade of the 21st century, can we be counted an “evil and unfaithful generation” seeking after signs? What signs could we seek? Crying statues? Marian apparitions? Bleeding Hosts? Yes, all of these and many more. But do we need these signs? We do not. We have a magisterial Church, her Eucharist, a divine guarantee against defeat, and pews packed with priests, prophets, and kings. All of these speak with one voice to say what is good and what the Lord requires: “Only to do the right and love goodness, and to walk humbly with your God.”

NB. This one is short for a Sunday homily b/c I'm not sure I can stand in the pulpit for the usual length of time!

How do we go about revealing to the world the mystery of God's mercy? We have in the sisters, Martha and Mary, two models of how we might proceed. When Jesus visits the sisters, Martha begins to fuss about, trying her best to prepare a suitably hospitable meal for their guest. Frustrated that Mary is ignoring her domestic duties in order to dote on Jesus, Martha complains to Jesus and asks him to admonish Mary for her apparent laziness. Instead of scolding Mary for her inattention to duty, Jesus turns Martha's complaint back on her, saying, “Martha, Martha, you are anxious and worried about many things.” We should notice here that Jesus doesn't chastise Martha for griping nor does he seem ungrateful for her work on his behalf. Rather than soothe Martha's hurt feelings by telling Mary to get to work, rather than tempering Martha's anger with a lecture on patience, Jesus goes straight to the root of her fussiness. Martha is anxious; she is worried. Faced with the presence of Christ in her home, Martha chooses to get busy; she deflects her anxiety by “doing stuff,” hoping, perhaps, that by staying busy she will burn off the fretting worry. Mary, on the other hand, sits at Jesus' feet and listens to his instruction. She too might be anxious. She might be just as wound up and nervous as her sister in the presence of Christ, but she chooses “the better part,” attending to Jesus as he teaches her the mysteries of his Father's revelation.

Why does Jesus consider Mary's rapt attention to be better than Martha's distracted busyness? Let's ask this question another way. Who is most likely to learn: a student who sits in class texting on her cell phone, checking Facebook, or doodling; or the student who attentively listens to the teacher – no distractions, nothing to cloud her mind or burden her heart? If you have ever tried to teach a child a difficult math problem, or convey a set of relatively boring facts, then you know the answer to this question! Mary has the better part because she is more likely to learn, more likely to “get it,” more likely to become the better teacher and preacher of the mysteries herself. Martha will get quite a lot done, but will she be open to seeing and hearing the mystery that Jesus has to reveal? Jesus tells Martha, “There is need of only one thing.” There is only one needful thing, only one thing we need: to listen to the Word, the Word made flesh in Christ Jesus.

When you take up Christ's commission to preach the mystery of salvation to the world, do you first listen to the Word; or do you get busy “doing stuff” that looks Christian, sounds Christian? Do you really hear what Christ has to say about God's mercy, His love? Do you attend to the Body of Christ in action during the celebration of his sacraments? Do you watch for Christ to reveal himself in those you love, in those you despise, those you would rather ignore or disparage? Can you set aside the work of doing Christian things and just be a follower of Christ, just long enough to be filled with the Spirit necessary to teach with all wisdom? It's vital that we understand that Martha isn't wrong for doing stuff. Her flaw rests solely in her anxiety and her worry while she's doing stuff. Being anxious and worried about many things while doing God's work is a sure sign that we are failing to grasp the central mystery of our commission to preach the Good News: it is Christ who preaches through us, not only with us, along side us, but through us. If we have truly seen and heard the mystery of our salvation through God's infinite mercy, then there is nothing to fear, nothing to be anxious about, nothing that can or will defeat the Word we are vowed to spread. Why? Because everything we do and say reveals Christ to the world. If the Church is the sacrament of God's presence in the world, and we are members of the Body of Christ, the Church, then we too are sacraments of God's presence. Individually imperfect, together we are made more perfect on the way to our perfection in Christ.