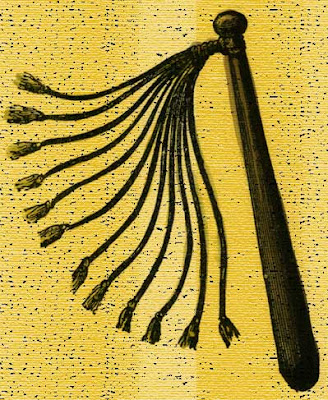 Here is a true child of ! Come and see.

Leather cords coil around the wrists. Bloody-sticky, the torn, pinched skin, caked with sand and hair, looks ready to pop, ready to turn itself inside-out in wet surrender. Fingers no longer move, blue-black, clogged and swollen with long-dead blood. He can hear the air split around each studded cord. . .and rattle in its descent, like market-day jewelry or a tent’s bead curtain, sharp and bronze. A biting stone, blade-edged to scrape the bone, to flay away the flesh and rend the spirit.

Nathanael says to Jesus, “How do you know me?” Jesus answers, “Before Philip called you—‘Come and see!’—I saw you under the fig tree.”

The first bronze barb strikes his sagging flesh just above the shoulder. The second strikes just next to the first and the remaining seven bite in line across his back. Pulling the leather cords unzips his skin, opening his flesh like ripping silk. Before he falls again to his knees, the nine scores leach out blood in perfectly straight rivulets. Falling, he smears his blood against one of those who try to hold him up and bent-over. We hear a faint, breathless profession, just a word or two as history.

Nathanael says, “Rabbi, you are the Son of God; you are the King of Israel.” Jesus answers him, “Do you believe because I told you that I saw you under the fig tree? You will see greater things than this.”

Squinting his eyes against stinging sweat and cloying blood, he sees bits of meat—no longer wildly flayed pieces but filleted cutlets—neatly squared portions of his body stacked at the feet of those who fear him for loving Christ. His nine-barbed scourge hangs in the crook of tree branch, dripping small drops to the roots in the earth. His tongue swells to push against his teeth. And he no longer screams, watching his testimony in flesh and blood dissected. He will see greater things than these.

And why does Nathanael believe? Because Jesus does a magic trick by telling him where he has been? No. Like all of those in the gospels who come across the Christ, all of those who approach him in some need, with longing, Nathanael sees with eyes wide-open the glory of the Word given meat and bone standing before him. He sees all of his deficiencies turned to excesses; all of this problems resolved into gifts; all of his sins washed clean and forgotten. He sees standing before him the Son of God and the Son of Man come to give himself for us all. There is nothing else for Nathanael to say, nothing else for any of us to say but, “Jesus, you are the Son of God, you are the King of Israel!”

How much do you love your skin? Is it worth a single witness? Just one chance to say out loud to an unsuspecting disciple of the Lord, “Come and see…”?

Come on, Spirit, light my fire! 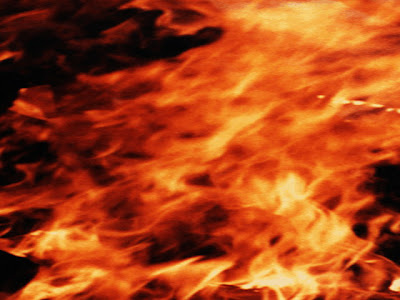 Surrounded as I am by so great a cloud of witnesses, I must ask: have you come to help our Lord to set the earth on fire?! Have you come here to help him destroy the family, to divide the nation, and to conquer the church? Do you understand that the water of your baptism did not extinguish the holy fire set ablaze in you, but rather those blessed waters feed and spread the fire of the Holy Spirit like gasoline, consuming you, burning you to perfection? And your job, my job, our job together is to run shouting like lunatics—holy priests and prophets—to run shouting through the dry-tinder kindling of this world, setting everything cold and hard and brittle on fire with the Holy Spirit! If you will follow Christ, walk his Way, carrying his Cross as yours, then you will become a Holy Pyromaniac.


The author of Hebrews writes, “Since we are surrounded by so great a cloud of witnesses, let us rid ourselves of every burden and sin that cling to us…” Fire burns its fuel first. The fire of the Holy Spirit burns away every burden and sin, releasing the grip of anxiety and freeing body and soul from the sickening weight of disobedience. Essentially, we are lightened for the race before us, unencumbered for navigating the Way and finding our Morningstar. Fixing our eyes on Jesus, “the leader and perfecter of faith,” every burden, every obstacle, every failure is lifted, surmounted, rectified, and we are propelled into the same joy that Christ saw before him through the Cross. Through the Cross. Not around it or under it or above it but through it, only through the Cross did he and do we come to the long anticipated joy in the presence of the throne of God.

But what does “only through the Cross can we find joy” mean day-to-day, minute-to-minute? First, be warned: the race to the Cross is heart-wearying! It’s not a test b/c a test is too easy. You have the help of the Holy Spirit! What’s a test when the H.S. is your cheat sheet? There is no obstacle course, something like a heroic passage from Greek myth—no giants to behead, no mutant spiders to outwit. You don’t even have to memorize any arcane languages or master multiple sets of occult symbols or chase down any wizardly objects. No. What you have to do is actually much, much worse than all these; much more difficult and painful: you must release your pride, unclench your self-satisfaction and arrogance, your misplaced sense of duty and control, and you must be weak before the Lord, praying, “I too wish the world were already ablaze for you, Lord! Enkindle in me the fire of your righteousness, burn away my burdens and sins, and make me a torch for your purifying love.” To joy through the Cross…

Going to the Cross for us, for our example and our benefit, Christ poured himself out, emptied himself in total subjection to the Father, becoming for us our sin. His kenosis, his abandonment to the worst of human depravity and his freely accepted death for our sake, is the spark for a holy fire, the match that pops and flares and sets all creation blazing in sacrifice. Every thing, every person and place, every relationship and bond, every right and wrong, all of it, our peace, our achievements, our grand plans and projects, our deeply held convictions and logical conclusions, our allegiances and sworn wars, our science, theology, philosophy, art, all of it, everything is transfigured, transformed in the perfecting conflagration of the Cross, the Empty Tomb, and our Lord’s ascension to the right hand of his Father. I tell you, Jesus says, I did not come to bring peace but division…and to leave everything in ash and smoke.

We have not yet resisted sin to the point of shedding blood. Our brothers and sisters in the have. Those of us in the have bled and bled. In , we bleed for the state’s fear of an all-consuming fire. In ? Probably not today or tomorrow. But it’s not impossible that one of us here or all of us together could be called to resist sin to the point of shedding blood. Is that frightening? Of course. Our faith, or rather our religion, is a comfort to us. We find settled patterns and rhythms here. Familiarity and peace. Should our faith be comforting? I mean, should the fact that we trust a man who willing died on a cross for us be a source of comfort to us? You have vowed to do the same for me, ya know? To die for me. And I for you. That promise of witness is greater than family or friends or neighbors. That promise to stand up and speak up and give witness to a mighty God is greater than the comfort of religion or the temporary excitement of spirituality. For the sake of your joy beg to be emptied of every burden, every sin, and then fix your eyes on Jesus. He is the only leader, the only perfecter of our faith.

Again: surrounded as I am by so great a cloud of witnesses, I must ask: have you come to help our Lord to set the earth on fire?!
at 10:28 AM No comments: 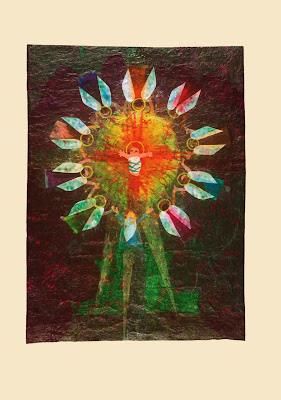 from Pope Benedict XVI's Sacramentum caritatis (66): During the early phases of the reform [of Vatican Two], the inherent relationship between Mass and adoration of the Blessed Sacrament was not always perceived with sufficient clarity. For example, an objection that was widespread at the time argued that the eucharistic bread was given to us not to be looked at, but to be eaten. In the light of the Church's experience of prayer, however, this was seen to be a false dichotomy. As Saint Augustine put it: "nemo autem illam carnem manducat, nisi prius adoraverit; peccemus non adorando – no one eats that flesh without first adoring it; we should sin were we not to adore it." (191) In the Eucharist, the Son of God comes to meet us and desires to become one with us; eucharistic adoration is simply the natural consequence of the eucharistic celebration, which is itself the Church's supreme act of adoration. (192) Receiving the Eucharist means adoring him whom we receive. Only in this way do we become one with him, and are given, as it were, a foretaste of the beauty of the heavenly liturgy. The act of adoration outside Mass prolongs and intensifies all that takes place during the liturgical celebration itself. Indeed, "only in adoration can a profound and genuine reception mature. And it is precisely this personal encounter with the Lord that then strengthens the social mission contained in the Eucharist, which seeks to break down not only the walls that separate the Lord and ourselves, but also and especially the walls that separate us from one another."

Our adoration of the Blessed Sacrament is not something we just do b/c we have time to kill in the retreat schedule, or b/c it’s now the trendy thing to do! As our Holy Father makes plain in this exhortation: (reread underlined section). Precisely, precisely…at that point where you and I encounter Christ in our adoration and communion, precisely at that moment we are offered a grace: the chance to serve Christ, to honor his work and Word, to lift him up in praise and thanksgiving, a chance to be of godly use to someone else. Rather than taking us away from the messy work of Christian service, our adoration of the Blessed Sacrament pokes and prods, and pushes us out, out there to get sweaty in taking care of the needs of others. Think about it: does Christ need our adoration? No. God has no need of our praise, but our desire to praise Him is His gift to us. And our desire to praise him together in the adoration of the Blessed Sacrament is His gift to us and then we are held responsible for becoming gifts to others. Ask yourself: how will I take this time in the presence of the Lord and then give it away?