Creative design ideas for handling everyday tasks. . .not sure about the toilet training device.   I predict a visit from Child Protective Services.
I remember seeing this clip on AFV when it aired.  I laughed so long that I thought Scuba Becky was going to have to share a tank of O2 with me.
Terrible way to wake up. . .and funny.  Another terrible wake up. . .if they had done that to me, well, the cops would never find the bodies.
Can't look at this pic w/o getting a little queasy.
Yup.  Duct tape fixes everything.
Hey!  Buddy!  This leash ain't gonna walk itself, ya know?

From swissinfo.ch:  The current rector of the Angelicum, Fr. Charles Morerod, OP has been named a bishop! 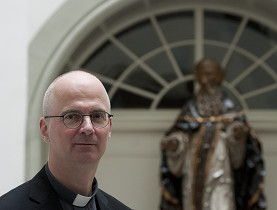 Charles Morerod has been named the new bishop of Lausanne, Geneva and Fribourg. The 50 year old replaces Bernard Genoud, who died last year.

The appointment was officially announced at a media conference in Fribourg on Thursday.

"To be honest, I had hoped it wouldn't be me," Morerod said of his appointment. But although the responsibility was heavy "there are grounds to be joyful", he said.

A member of the Dominican order, Morerod currently teaches at the philosophical faculty of the [pontifical] university in Rome [i.e. The Angelicum]. He previously taught at Fribourg University.

The diocese of Lausanne, Geneva and Fribourg comprises around 690,000 Catholics out of a population of 1.58 million, spread across the cantons of Vaud, Geneva, Fribourg and Neuchâtel.


Of note:  Fr. Charles serves as the chair of the Holy Father's International Theological Commission and sits on the Vatican side of the talks with the SSPX.
On a personal note:  how fortuitous that I have been recalled to serve in the U.S.  Fr. Morerod was to be my dissertation director.
Follow HancAquam & Check out my Wish List --------->
at 8:21 AM 1 comment:

Are you ready for the new Missal?

On the First Sunday of Advent, Nov. 27th, the Catholic Church in the U.S. will begin using the new English translation of the Roman Missal.

I'm hearing and reading that many Catholics--even, most Catholics!--know little or nothing about this change.  Given the time, energy, and money the bishops have put into introducing the new Missal, I find this hard to believe.
So, here's my question:  what, if anything, has your pastor/parish done to prepare the faithful for this dramatic transition?
Follow HancAquam & Check out my Wish List --------->
at 11:06 AM 20 comments:

The Ten Commandments of Atheism. . .not one of these commandments contradicts or conflicts with Christian teaching.  In fact, most of them are rooted in the Christian moral tradition.
Law prof denied tenure b/c his students whined about his Socratic Method of teaching.   Those ninnies wouldn't last a week at U.D.

A list of organizations and individuals who have publicly supported the OWS movement:  Communists, Nazis, Black Panthers, B.O., Nancy Pelosi, Hugo Chavez, Louis Farrakhan, ad. nau.
Nothing and No One is safe in the Occupiers Squatter Camps:  deaf man raped.

Dissecting a WaPo story on the new English translation of the Missal.  Lots to dissect.

Could a single Marine unit take down the Roman Empire?  Can't wait for the movie!  (Exit question:  will there be any aliens?)

Catholic Zombies!  Now they have gone too far. . .too far indeed.

Southerners are losing their manners.  Say it ain't so!  (NB.  Southern manners can often mask contempt, but polite contempt is better than open hostility, right?)

Wow.  Someone recruit this guy to run for U.S. President.  I'd almost be willing to amend the Constitution if he'd run.

This reminds me of that movie where all the good-looking 20-something's cheat death in a plane crash and then get killed off one by one via bizarre accidents.

On booze and the distinction btw the correlation of facts and the cause of events.

As regular H.A. readers know, I am leaving Rome and heading back to the U.S. for reassignment.

I will be serving the Good Folks of St. Dominic's Church in New Orleans, LA as parochial vicar.

This assignment will be very good for my preaching. . .and very bad for my waistline.  Oy.

Pray for us all, please!

Credit where credit is due:  "The U.S. bishops' social justice arm has cut funding to a New York-based AIDS charity after the group was discovered to have lied about its adherence to Catholic teaching."
If I had to guess, I'd say that the bishops are honestly trying to purge CCHD of its dissident habits.  This whole scandal is probably a case of The Church Lagging Behind the Curve when it comes to staying current on rapidly evolving controversies.

In other words, I doubt very seriously that the episcopal portion of the Catholic hierarchy in the U.S.  is conscious of the errors of the CCHD and supports these errors despite Church teaching.  It is more than likely that the bishops in charge are playing "catch-up," that is, they are scrambling to keep current with the problems, sifting through the various and sundry perspectives to get at the Truth of the Matter.   They must be bombarded with "facts" on a daily basis.
The stability of the Church--though not her ultimate fate--rests on the shoulders of the bishops.  If you aren't praying/fasting/sacrificing for them, you should be!
Follow HancAquam & Check out my Wish List --------->
at 10:27 AM No comments:

No "global warming" in the last 11 years.  Prepare for a flurry of excommunications from Pope Gore.

The "urban myth" of razors in your kids' Halloween candy. . .of course, if lefty icon, Bill Maher, had his way, your kids would get illegal drugs in their treats.

5 Things You Didn't Know About Edgar Allan Poe. . .coincidentally, EAP's critical nemesis was also one of Walt Whitman's earliest haters, describing Leaves of Grass as "a mass of stupid filth."

This is what happens when a woman doesn't listen to her husband.

Dogs of the Lord in Madrid!

All the Saints Mass Intention

Tomorrow is All Saints Day. . .I will be concelebrating Mass with the other friars of the priory.

As always, I will keep H.A. readers in my prayers. . .tomorrow--most especially--I will offer my intentions for all my Book Benefactors.  Without your help I would've never made it this far in my studies!
God bless you all. . .Fr. Philip, OP
Follow HancAquam & Check out my Wish List --------->
at 3:50 AM 1 comment:

Proof that the Tea Party movement is racist, violent, etc.  A must read.  Really, read it.
Don't be too quick to blame Muslim students at CUA for that ridiculous lawsuit.   Looks like the work of yet another media driven anti-Catholic bigot with a law degree and tenure.
USCCB doubles down on Sr. Johnson's book.   The Good Sister claims that the bishops never met with her.  Crdl. Wuerl says he offered to meet with her three times and she never responded.
The so-called "Arab Spring" is a real horror story for young women.  Remember. . .B.O.'s Smart Diplomacy got them there.  Caution:  the subject matter is a bit gruesome.
Home foreslocure law firm throws a homeless-themed Halloween party. . .stir the tar, fluff the feathers, boys!
How the concept of "experience" is used by modernist Catholics to undermine the Church.  We were fed bucketsful of "experience theology" when I was n seminary.
Deo gratis!  Catholic diocese loses its bid to purchase the Crystal Cathedral.  Maybe the next bishop of Orange will build a Catholic church for his cathedral.
Evangelical convert to the Church explains how the deformed Protestant concept of sola scriptura led him back to Rome.
My fav soup. . .can you throw in a side order of The Wailing of Their Women, please?
Surprisingly, these are not road signs here in Rome.  Though it does help explain Italian bureaucracy.
Hmmmm. . .maybe we should consider this sign for Sunday morning's "family Mass."  (ducks, runs)