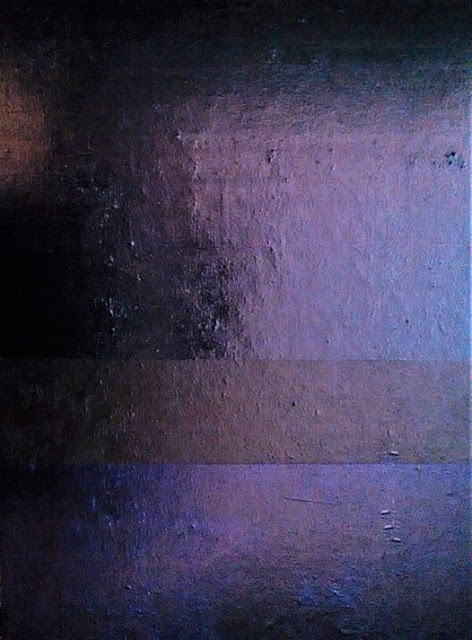 This is an experiment with chromatic black. The foundation layer is composed of Mars Black, Primary Blue, Burnt Siena, and Phyto Green. The "colored" portions are (top to bottom) green, black, blue.
__________________

How does a little bit of dirt and spit smeared on the eyes heal blindness? It doesn't. The Man Born Blind isn't healed by Jesus' rather unsanitary ad hoc remedy. He isn't healed by the magical waters of the Pool of Siloam either. Nor is he healed through his faith in Christ. So, what heals him? The man's disability is healed by his obedience to Christ's Word, by his willingness to listen to and comply with Jesus' order: “Go wash in the Pool of Siloam,” Jesus tells him. The result? “So he went and washed, and came back able to see.” Notice that there's no declaration of belief or faith by the man, no proclamation or confession, nothing that would indicate that he even knows who Jesus is before he is healed. As far as we can know from John's account, the man doesn't speak until after the miracle occurs. Jesus heals the man as a gift, out of abundant generosity and as a sign of his Sonship. The man's subsequent testimony to the religious authorities bears out Christ's wisdom in choosing this man as a witness to his power. Later Jesus catches up to the man and asks him, “Do you believe in the Son of Man?” The man says, “I do believe, Lord.”
Belief comes easy; obedience, not so much. We can believe all sorts of things – sensible and nonsensical – without much effort, without worrying too much that we may be proven wrong. We've come to accept that one's beliefs are an intensely personal/private matter that no one can justly dispute or deny. If I were to tell you that I believe that the Earth is flat, you would probably think I'm just being eccentric and ignore me. Well, it's his right to believe that nonsense if he wants! So long as my beliefs don't hurt anyone – what's the big deal? Like I said, belief is easy. Obedience is an entirely different matter. Obedience is about listening to and complying with something someone else says. Obedience necessarily involves another person. Belief is personal and private. Obedience is communal and public. For me to obey my religious superiors means listening to them and complying with their requests. I'm told to move back to Rome, or given job within my province, or asked to take another ministry site. I don't want to do any of these things, but obedience requires me to listen and comply. That's hard. Being obedient can change my job, my living arrangements, my personal comfort; it can challenge my gifts, and require me to be open to all sorts of potentially unpleasant outcomes. Believing is easy; obeying is not.

And maybe this is why the story of the Man Born Blind is told the way it is. Jesus healed some according to their belief. He healed others b/c of the faith of family and friends. But the Man Born Blind is the only person to be healed according to his obedience. And this is good news for us! Belief and faith can often seem difficult to conjure. All sorts of sins can interfere with our natural desire to come closer to God. When we focus too much on the emotional effects of believing, we sometimes come away empty. We expect that believing will necessarily erupt in us like a whirlwind. Taking us to heights of spiritual ecstasy and mystical union with God. When we don't feel those effects, we imagine that our faith is lacking. That our belief is somehow weak. But if we can be healed – like the Man Born Blind – by obedience, by listening to and complying with Christ's Word, then there is another way to seeing his light in our life. There's another way for us to come closer to God that can get us through those times when faith and belief seem distant and sore. We can be children of the light through obedience.
Paul writes to the Ephesians, “Brothers and sisters. . .try to learn what is pleasing to the Lord. Take no part in the fruitless works of darkness; rather expose them. . .” Paul describes the work of Lent. Learn to please God. Do nothing to assist the work of darkness. Expose the shameful works of evil. We learn to please the Lord by hearing, listening to, and complying with His Word, Jesus Christ. We do this not for His sake but our own. God doesn't need our obedience; we do. We are obedient for our healing, so that we might come out of the blindness of sin and into the light of our salvation. We avoid participating in the fruitless works of darkness by knowing always doing, saying, and thinking only what is good for the Gospel. As long as we put the Gospel before our thoughts, words, and deeds and act only through the Gospel, we can avoid helping those who preach the sin and death. And the only way to expose the works of darkness is to always and everywhere live, breath, eat, sleep, and work in the Truth of Christ who is the Way, the Truth, and the Life. We have two weeks left in this Lent. It's time to work harder at our God-given mission of being Christ's light to the darkening world. “You are light in the Lord. Live as children of light”!