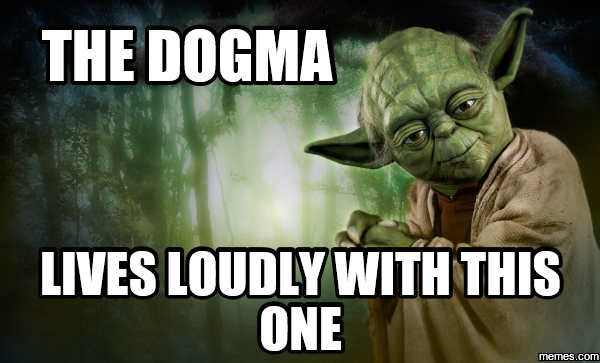 Don't put down your cross!

Our Lord names Peter “Satan.” Last week, he named Peter “the Rock,” the rock upon which his Church would be built. How does Peter go from being “the Rock” to “Satan” in a week's time? Having declared his belief that Jesus is the Christ, and receiving his title, “the Rock of the Church,” Peter ends up doing what many of us do when confronted by a crisis of faith. We panic. . .and do or say something dumb. When Peter hears Jesus say that he – Jesus – must go to Jerusalem and die at the hands of his enemies, Peter blurts out the dumbest possible thing he could, “God forbid!” Apparently, in his panic, Peter forgets that Jesus is God – a confession he himself made just last week – and that God is telling him what must happen. Rather than comfort Peter or accompany him or engage him in encounter, Jesus rebukes him, “Get behind me, Satan!” Sorry. But Jesus would get an “F” in pastoral practice at the seminary! Rather than coddle Peter's lack of faith, Jesus calls him out as a tempter, giving him the name of humanity's greatest spiritual enemy. Jesus knows that he must carry his cross and die. Not even the Rock can be allowed to deter him.

So, what does all this have to do with the price of crawfish at Dorignac's? Besides showing us how even an Apostle, Peter the Rock, can allow his fear to overrule his faith, Jesus is revealing to us a truth bound to make us a little queasy – we all have a cross to carry and Satan's self-appointed task is tempt us into putting it down. Jesus knows that he is bound for Jerusalem and death. He knows he's going to be betrayed, tortured, and executed. He bears all this as his cross, along with humanity's sinful nature. If he were to allow Peter to tempt him into laying down his cross, humanity's salvation would be thwarted. We would – even now – dwell in darkness and death, without any hope for redemption. Instead, Jesus does what he must. He rebukes Peter and reveals another hard-to-hear truth: “Whoever wishes to come after me must deny himself, take up his cross, and follow me.” That's God's thinking not Man's. It is Satan who encourages us to set aside our crosses and make ourselves more comfortable. It is Satan who teaches us that our crosses are unbearable burdens; that our crosses are unnecessary restrictions on our liberty. It's his job to make us believe that we can still receive God's love even as we set aside the very tools we need to receive His love.

If you think it's strange to look at the cross you carry as a tool for receiving God's love, think again. Think this way instead: Jesus' cross was his tool for receiving God's love for all of humanity. The cross was the instrument – the tool – by which Jesus took up our sinful natures and gave them to our Father in sacrifice, freeing us from sin and death. If this is true for Christ, why can't it be true for us as well? Jesus himself says that taking our crosses is a condition for following him. Following him where? If you follow him, you end up where he did – dying sacrificially on your cross; that is, dying to self for the sake of Christ to become holy. In his desperation to prevent you from dying to self and becoming holy, Satan will tempt you with every trick at his disposal. One of his oldest tricks – the one Peter tries out – is to try and convince you that your cross is an unnecessary burden; that you have been unfairly treated in the games of crosses; that somehow or another you have been especially picked out of the crowd to endure extra trials. And b/c you have been so sorely mistreated by God, you deserve a break, you are entitled to set your cross aside and just coast for a while. And when you do, Satan slithers up next to you, and says, “Let me show you an easier way. . .”

And that “easier way” is indeed easier. . . and shorter, faster, less expensive. . .and deadlier. Set your cross aside – your tool for receiving God's love and growing in holiness – and your way is most definitely easier. Because there is nothing easier than choosing to be separated from God. . .forever. What Satan knows and we must never forget – no cross of ours is ever bigger than our Father's love for us. No cross of ours is ever deadlier than life lived in shadow of the devil's lies. Whatever your cross is – disease, poverty, bad marriage, sexual vice, alcohol, drugs, whatever it is – your cross is temporary, and Christ is always, always, always with you. Carry that cross while following Christ's teachings, dying to self in loving sacrifice for another, and you will better receive God's ever-present love and mercy; you will grow in holiness. Our crosses are not lifestyle choices, or a harmless bad habits, or unfair impositions on our freedom. They are living, breathing tools for lifting up our brokenness. By lifting up to God that which threatens to smother us in sin, we give Him glory, and He takes our contrite hearts as worthy sacrifice. When Satan tempts you to lay down your cross and take it easy, say to him, “What profit would there be for me to gain the whole world and forfeit my life?”