Without the Father We Are Nothing 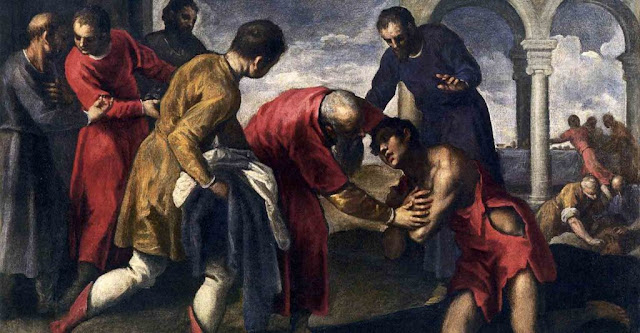 This parable has it all! Self-righteous religious folks. A disrespectful son. A father's disappointment. A family broken by sin. Loose morals, financial ruin, an inevitable rock-bottom comeuppance complete with pigs, and fraternal jealousy; then, conversion, confession, repentance, absolution, and, finally, rejoicing. Much rejoicing. This parable is about a father's mercy, a son's dissipation, another son's anger and...you and me. This parable, like all of Jesus' parables, works on several levels at once. It's about Israel's infidelity and a return to grace. It's about the Church's infidelity and her return to grace. It's about my faithlessness and yours and our happy return to the Father. The foundational truth revealed in the parable is fairly straightforward: outside a filial relationship with the Father we can expect little more than misery. Fortunately, the Father is Mercy and any sinner who repents and asks for forgiveness will receive it. We know this b/c Jesus eats with sinners. He doesn't eat with sinners to signal his approval of their sin, but to reveal the always, already opened arms of the Father, waiting to welcome us home. In confession and repentance, we are always joyfully welcomed home.

So, this is the Parable of the Forgiving Father. He's sinned against twice in the story. First, the younger son wishes his father dead by asking for his part of the farm. That's what this request amounts to: give me my inheritance now b/c to me you are dead. Second, the older son – sick with self righteous jealousy – criticizes his father for forgiving his disrespectful younger brother, saying, in essence and with much resentment, you are a foolish old man! What are the father's options here? He could turn away the younger son, pointing out how he deserves his slave-wage job, working with pigs. He could rant about the disrespect he's been shown by his sons. He could vent his disappointment and reject them both under the Law. Friends, family, neighbors, even the religious folks would applaud the steel in his spine and the righteousness of his anger. These two ungrateful brats want all that is his, but they do not want him. They want his wealth, but they want it detached from their filial obligations to him. Instead of bouncing them both out of his life, the father chooses mercy. Always mercy.

Do the sons' attitudes toward their father sound familiar? They should. It's the spiritual history of Israel, the spiritual history of the Church. It might even describe my spiritual history and yours. Since the serpent started chatting up Eve in the Garden, we've been prone to believing that we are capable of becoming gods w/o God's help. Over the millennia, we've turned to alien gods, foreign rulers, ancient philosophies, modern science, postmodern technology, materialist ideologies, secular politics and utopias, and sometimes just plain old-fashioned magic in search of a way to become gods w/o God. This is the sin of Pride, the root of all sin. And all sin is the rejection of our filial relationship with the Father. The younger son looks for salvation in wine, women, and song. The older son looks for salvation in being a slave to his father's orders. Both see their salvation as products of their own hands. Something they themselves can conjure up and live out on their terms alone. Both resent their father for his outsized role in their lives. They see him as suffocating, controlling, unlikable, and ever present. Most importantly, both sons fail to love, fail to give thanks, fail to honor where they came from and how they got there. They cannot be happy b/c they refuse to be joyful. They will not to surrender themselves to all that the Father has to give them.

If Lent is about anything at all, it's about practicing the spiritual art of surrender. That is, the art of turning ourselves over to the will of the Father and living our best lives according His commands. Yes, that sounds terribly old-fashioned and maybe even a little scary. But we are the freest that we can ever be when we think, act, feel, and speak in accord with our final end – eternity with the Father. The big and small sacrifices we choose to make during Lent work on us to turn us toward Him who best fulfills our deepest desires, our brightest goals. We can imitate the sons. We can wallow in the material stuff of the world, feeding our passions, and wasting our inheritance. We can wallow in our self-righteous adherence to the Law, judging sinners, and being resentful of our Father's mercy. Or, we can be like the father in the parable. We can choose to be elated that a lost son or daughter returns home. We can choose to throw a party for those who came to their senses and received the Father's mercy in confession and repentance. We can choose. We can choose to become like God with God. To be Christ with Christ.