[NB.  Apologies for being so quiet lately.  I've yet to figure out how to adjust my Roman lifestyle with my American schedule.  This failure is taking its toll.  Fortunately, Friday is my play day!]
Clinton appointee issues preliminary injunction against the enforcement of some portions of AZ's anti-illegal immigration law. . .and the Talking Head Consensus seems to be that this is bad for B.O. b/c it gives the impression that the feds aren't really all that interested in enforcing immigration law.
Judge's decision causes "helplessness and anarchy."  Frankly, reading the decision is scary.  Judge Bolton is preoccupied with the policy implications of the law and not its legal standing.  She spends a great deal of time writing about how the law will "burden" law enforcement, etc.  That's not her job.  We hire politicians to deal with money and logistics.
Another analysis of Bolton's decision with relevant links.
Study finds that reporting on scientific research in the media has taken on an increasingly authoritarian tone since the 1980's.
Why is the DoJ stalling when it comes to protecting the voting rights of our nation's men and women in uniform?  Maybe b/c military folks tend to vote for the Wrong Party?
Well-worth the time to read the whole thing:  What unique contribution can a Catholic education make to the maintenance of western liberal democracy?  More specifically, what contribution can a uniquely Dominican education make?
Relics of Blessed Mother Teresa arrive in Dallas!
More on racial discrimination in admissions at America's elite universities.  Poor Whitey Need Not Apply.
That Catholic professor of Catholicism at the Univ of IL who was fired for. . .GASP!. . .teaching Catholicism has been rehired.  This is good news.  Now, he should pursue his lawsuit and find out the real reason he was fired.
In other anti-Christian news, a Jewish prof who converted to Christianity is ostracized at Oxford U.
Anne Rice "breaks up" with Christianity. . .not with Christ, mind you. . .but with Christianity.  Ah, the fruits of a Spirit of Vatican Two religious education!  Unfortunately, this latest development in the author's spiritual saga was entirely predictable.  Her autobiography is chocked-full of mental reservations, doctrinal dodges, and self-authorized exemptions.  Fortunately, the Spirit is hard at work and we will likely see Mrs. Rice among us again.
No, B.O. is not a Muslim.  And even if he were a Muslim, he could still be an excellent American President.  That he is not an excellent American President has nothing to do with his faith or lack thereof.
Cambridge student sitting exams gets his cakes and ale. . .and a little comeuppance.
Consumer decision-making when confronted with buying organic and non-organic products.
An experiment in testing the meaning of friendship:  a car trunk, a dog, and your spouse.
A graph predictions what people will do during the Coming Zombie Apocalypse.  They left out:  "Become a Human Zombie Collaborator."  Sorry, but the CZA means it's time to CYA.
Follow HancAquam ------------>
at 8:05 AM 6 comments:

Even though I deleted the link to my Amazon Wish List, a couple of intrepid HancAquam readers found their way there and sent me some books!
However, the books arrived with no return addresses. . .so, here my Mille Grazie to Sylvia B. and Patrick McA!
Follow HancAquam ------------>
at 6:30 AM 2 comments:

Kinda sad when the only member of the MSM who is willing to tell the truth about the whole NAACP/Sherrod affair is comedian, Jon Stewart.
Democrat Kerry forks over $500K in taxes for the yacht he tried to hide from MA's IRS.
Distinguishing btw Real Science and Cargo Cult Science, or Real Science and Whatever It Is That Those Global Warming Guys Are Doing.
Not all the Journ-O-lists were pushing for a pro-B.O. Borg-like message on all things political.
The Mahony Effect on CA Catholics:  majority support same-sex "marriage."  NB.  the poll does not distinguish btw Mass-going Catholics and Catholics in Name Only.
There is a direct correlation btw one's facial hair and one's contributions to society.
How company policies are made. . .it is also how customs in religious communities are made!
"Happiness" illustrated in a single pic.
Follow HancAquam ------------>
at 6:25 AM 3 comments:

On being a lover of parables (Podcast)

Podcast
Parables—like poetry—drive most people crazy. The symbols, the allusions, images with multiple interpretations—all of these breed frustration and impatience even in the heartiest soul. However, there are some who enjoy the challenge of figuring out these literary mysteries. Think of them as miniature detective stories planted with bits of elusive wisdom designed to stretch the imagination and exercise the mind. And despite the cussing and spitting that parables and poetry often evoke in some, these art forms can push us to broader and deeper understanding, both guide us and force us to consider angles of approach that we might otherwise fail to use. So, let's wipe our chin, confess our cussing, and consider the possibilities. Jesus teaches with parables because he knows something we oftentimes forget: as we progress along the Way we need more and better food for the journey. We can't continue to live and grow in the Christian life consuming nothing but cut and dried propositions, raw statements of belief, and easily digestible greeting card pablum. At some point, we have to tuck into the meat and potatoes of the Good News, risking a bout or two of indigestion along the way. Case in point, those tiny mustard seeds can cause diverticulitis and yeast an itchy rash. Mustard seeds can also grow into a hearty, edible plant and yeast is necessary in leavening bread and making beer. Even the smallest seed, the tiniest bacterium—given time and patience—can produce a desirable (and delicious!) result.
Let's say that Jesus is using the mustard seed and the yeast bacterium to refer to the faith infused into an individual soul. Given the right conditions—a set of listening ears and seeing eyes, an opened heart and mind, a strong desire for holiness—an individual infused with faith can nurture this virtue of trust into a hearty way of life that produces an admirable fruit. But what if Jesus is using the seed and the yeast to refer to the faithful individual planted in the fertile soil the Church? The seed and yeast of one soul's faith can fertilize and leaven the whole Body of Christ, prompting the Body to produce a higher, stronger yield of holiness. But what if Jesus is using the image of the seed and yeast to refer to the Church herself, all of us together constituting just one mustard seed, one bacterium, his one Body planted in the fields of the world? Then, like the faith growing in a single soul, and the single soul growing in the Body of the Church, the Church is planted in the world—one seed, one bacterium—to thrive and produce an admirable fruit. Do we settle on just one interpretation of the parable? Or do we take choose to hold all three simultaneously? Even better: do we take these three and grow them into another and another, always remembering that the mustard seed can only produce mustard and that yeast will always be yeast?
If we hope to avoid being favorable compared to the Jeremiah's loincloth—rotted and good for nothing—then we must safeguard the Word we've been given and at the same time broadcast it as seed into the fields of the world, as yeast into the unleavened dough of our culture. The Lord charges Judah with a faithless pride. He says that they are a “wicked people who refuse to obey my words, who walk in the stubbornness of their hearts,” who serve and adore strange gods. If we hope to avoid this righteous charge—as individuals, as a Church—then we must listen to Christ's parable with more than an analytic mind. Our task as those baptized into the life, death, and resurrection of the Lord goes far, far beyond the recitation of liturgical formulas, far beyond the soothing litanies of good intentions. We are not only charged with spreading the seed of the Good News, we are also charged with nurturing what we have planted, tending the fields, pulling the weeds, and reaping an admirable harvest. But even as we work, we do so as servants of a more merciful Lord, one who cared for us as we grew from a seed to a sprout to a fruit-bearing plant.
Parables—like poetry—can be infuriating in their vagueness. But let's not mistake Jesus' purpose in using the parable of the seed and yeast: he's teaching us that not everyone, at any given time, is ready to produce the same admirable fruit. An excellent farmer is a patient farmer. He is also a lover of parable and infuriatingly persistent.
Follow HancAquam ------------>
at 9:58 AM 4 comments:

Godwin's Law gets a corollary,  Sherrod's Law:  "The first one to accuse his/her opponent of racism loses." Besides, crying "Racism!" just doesn't work anymore.
Speaking of Sherrod. . .if her case is so important to the Left's media meme that the Tea Party/GOP/FoxNews is racist, why was she conspicuously absent from the Sunday talk show circuit?
Change You Can Believe In:  things could be worse!  Is this a message of hope?  Really?
Must watch vid of the week:  Democrat Howard "YEEEHAWWW" Dean gets spanked by Chris Wallace.  Who would have ever thought Dean could be speechless?
Heh.  No surprise here:  freedom-loving, uber-tolerant, diversity-preaching lib calls for the supression of organized religion.  Why?  Because he/she disagrees with religious believers.  Great argument.  I'm convinced.
Most conservative Supreme Court ever?  Pay particular attention to how the Court's "conservative" rulings are labeled.  What's in a label?
Not only is Democrat John Kerry berthing his $7 million yacht in RI in order to avoid MA taxes, he had the thing built in New Zealand!   Um, what about American jobs, Mr. Kerry?
Speaking of coffer-raiding politicians:  the city manager of Bell, CA (pop. 36,552) rakes in $787,637 a year.   This means that the city manager gets paid approx. $21,550 per resident.  Excessive?  The median income of Bell residents?  A little under $40,000 a year. (NB.  read the combox to see what happens when I try to do math.)
Did the media hacks on JournoList conspire to get B.O. elected?  Well, it was a conspiracy in the same way that lemmings rushing off a cliff is a conspiracy.
The Curt Jester is shocked to discover that women "priests" are not so orthodox when it comes to all things liturgical and theological!  Oddly, I never doubted it.
I hate marshmellows.  Don't eat them.  Here's why.
I've always wondered. . .how to prepare a kiwi.  NB.  they forgot the pork gravy.
On the use and abuse of medical procedures. . .sometimes it's just not about you.
I don't recommend this divination procedure for Catholics. . .but my Episcopalian readers might find it useful.
Follow HancAquam ------------>
at 8:30 AM 6 comments:

Please note that I have changed my podcast hosting site.

TooFiles had become too unreliable from my end, so I moved back to Pod-O-Matic.

Here's the podcast for "Ain't Nothing to do but Keep on Knocking."

Congrats to the newly ordained! 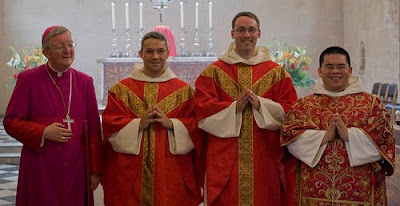 (L to R): His Grace Archbishop Bernard Longley of Birmingham, Fr. Thomas Skeats, Fr. Robert Gay, and the Rev. Br. Lawrence Lew.
I had the pleasant of studying with Fr. Skeats at the Angelicum this last year. Also, Br. Lew is wearing the same dalmatic I wore when I was ordained deacon at Blackfriars in 2004. Trust me, that thing is HEAVY! Fortunately, it was all of 67 degrees that day, July 3rd. Ah, English weather. Can't wait.
More pics and a report at New Liturgical Movement

Ain't no other way than to keep on knocking