NB.  Yes, this is an adapted homily from 2006. . .for reasons too complicated and embarrassing to get into, I had to recycle something from the archive.  If it doesn't work at the vigil Mass this afternoon, I'll have time in the morning to compose something new.

P.S.  This one didn't go over so well. . .I felt a stirring amongst the crowd that didn't bode well.
2nd Sunday of Easter (2012)
Fr. Philip N. Powell, OP
St Dominic Church, NOLA

Wendee wrote to ask about any book recommendations I might have for her 14 y.o. son who loves history.
A search on Amazon turned up some likely candidates, so I thought I'd post the link here for any other parents or kids who might be looking for something good to read. . .
Turn of the Century Boys' Adventure Books (it's not likely that these will have any offensive or age-inappropriate scenes in them)
C.S. Lewis' Space Triology
___________________

A box of books from the Wish List arrived yesterday. . .WooHoo!!
There was no shipping invoice, so my Kind and Generous Benefactor will remain anonymous. . .to me, at least.
Nonetheless, my prayers on your behalf will be properly credited to you in Heaven!
Also, a Thank You to Jason S. for the Kindle Book. . .I started reading it last night. . .good stuff!  You'd really be amazed at how many novels about ancient Rome there are.
God bless, Fr. Philip Neri, OP
___________________
Follow HancAquam and visit the Kindle Wish List and the Books & Things Wish List

Staying with us in the breaking of the bread


Have you ever had one of those moments when you suddenly, unexpectedly understand something that has eluded you for years? Try as you might, you just can't quite see the whole problem clearly, or grasp the solution firmly. Others try to help. You consult experts; read books; search the internet, but the pattern of events or the connections among the various elements of the problem just won't congeal into a coherent picture. Finally, one day, while you're mowing the yard or driving to work—BAM!—it hits you! All the pieces, all the connections, all the definitions and angles fall gracefully into place and you understand. Zen Buddhists call this satori. In the West, we call it a Eureka moment—the moment that our minds pierce the fog of confusion and we achieve a peaceful clarity; it is the moment our eyes are opened and we see, truly see. While walking toward the town of Emmaus, two of Jesus' disciples have their eyes opened to Christ's presence. Why couldn't they see him at first? The disciples were “looking downcast,” depressed with grief. Rather than seeking the Lord himself, they were looking for consolation. How was their sight returned to them? In the blessing and breaking of the bread.
Cleopas and his fellow disciple are despondent about the death of Jesus and the disappearance of his body from the tomb. Their grief and confusion prevents them from recognizing Jesus when he meets them on the road. They recount the dramatic events of the past few days. In response, Jesus, exclaims, “Oh, how foolish you are!” What causes their folly? Their hearts are slow to believe all that the prophets had revealed about the Christ. Jesus asks, “Was it not necessary that the Christ should suffer these things and enter into his glory?” Had the disciples listened and believed all that Jesus had taught them, they would know that there is no reason to grieve, no reason to be downcast. Being a patient teacher, Jesus walks them through the scriptures, beginning with Moses, and shows them step by step how he has fulfilled the Law and the Prophets. When they all arrive in Emmaus, the disciples make a simple yet profound request of the stranger who's walked with them, “Stay with us.” He does. And their eyes are opened to see the Lord when he blesses and breaks bread for them. He stays with us in the breaking of the bread.
Like these disciples who spend their limited time grieving the death of the Lord instead of seeking his wisdom, we too cause ourselves useless confusion and anxiety by refusing to trust in a fundamental truth: God is always with us, always among us, and providing for our care. How often do we cry out for God's help and fail to see the help He has sent b/c we are too busy looking for the help we want? How often do we bargain with God and fail to see the gifts He has freely given us b/c we are too busy bargaining for the things we want? In the scriptures and the teaching ministry of the Church, we have everything we need to understand that Jesus is the Christ. In the sacraments of the Church and our own charitable works, we have everything we need to grow in holiness. What the scriptures, the magisterium, the sacraments, and our good works cannot do for us is prise open our eyes to see God working among us and for us. For that, we must say, each of us must say, “Stay with us, Lord!” And he remains—plain to see and hear—in the Word of his prophets and in the breaking of the bread.
___________________
Follow HancAquam and visit the Kindle Wish List and the Books & Things Wish List

I've updated the Kindle Wish List with some novels set in ancient Rome. . .my favorites!
And I updated the Books & Things Wish List with some Must Have texts from the neo-Thomistic tradition of Garrigou-Lagrange--JPII's dissertation director at the Angelicum.
Some kind and generous soul recently purchased several books from the Wish List. . .when they arrive, I will send a Thank You note ASAP!
Click on St. Martin and donate to the Dominicans! ------>
at 9:13 PM No comments:

Stations of the Cross at the Colosseum in Rome. . .meditations written by the founders of the Focolare Movement. Save these for next year. . .
Academic Crimethink. . .this is how I became a Marxist-feminist lit theory robot in the 90's.  This sort of thing happens in schools of theology as well.
Faith & Riches. . .to put it bluntly:  believers are going to out-breed unbelievers.
Replicating NBC's "editing mistake" shows that it was no mistake.

Good question, actually:  why aren't the bounty-hunting Black Panthers not under arrest?

Not sure what to make of this. . .
I'm down to 318lbs.   That's a nine pound drop from last week.
Just to be sure, I weighed three times within an hour this morning.  All the readings were within a .2lbs. variance.
So. . .who knows?. . .whatever the reason, I'm grateful!  Your prayers are obviously working.


We have two stories of fear this morning. Mary Magdalene and Mary, the mother of James, discover Christ's empty tomb. “Fearful yet overjoyed,” they start to run back to the other disciples to report that their Lord's body is missing. Meanwhile, the temple guards report to the chief priests “all that has happened.” Afraid that the story of the missing body will be heard as evidence of Jesus' authenticity, the priests and elders bribe the guards to spread a false story about how the disciples removed their teacher's corpse from the tomb. The disciples are afraid. The priests, elders, and guards are afraid. Everyone it seems is brimming with fear this Easter Monday morning. The two Mary's flee the empty tomb. The guards run to the chief priests. The chief priests bribe the guards. And the guards accept the bribe. Everyone is afraid and everyone deals with their fear differently. However, our Lord appears to the Mary's and says to them, “Do not be afraid.” He changes their fear into a mission, “Go tell my brothers to go to Galilee, and there they will see me.” In the presence of the Risen Christ, our fear, worry, anxiety are transformed into a passion for spreading the Good News of the God's providence and mercy!
Anyone who tells you that there's nothing to fear in this world is lying. In the news just this morning: Syria is waging a civil war; N Korea is threatening to attack its neighbors; racial violence is on the rise all over the U.S.; Islamic extremists are taking power in Egypt and Liyba; 38 Nigerian Catholics were killed Easter morning during Mass by two car bombs; there is civil unrest in China; and the religious freedoms of western democracies are under attack in Europe, Canada, and the U.S. Our Holy Father, Benedict, said in his Easter homily that “darkness threatens mankind.” There is much to fear but there is no reason to be afraid. In the presence of the Risen Christ, fear is transformed into a passion for giving witness to the victory of life over death, the victory of truth over falsehood, the victory of light over darkness! The bloody cross of Good Friday yields the empty tomb of Easter Morning. Having been students at the feet of Jesus, the Mary's know this truth, so they are “fearful yet overjoyed” at finding his body missing. And when the Christ appears to them and says, “Do not be afraid,” they begin their mission to spread the good news of his resurrection.
We are in the presence of the Risen Christ this morning. Any fear we may be feeling; any anxiety we may be nurturing; any despair, disappointment, anger, dissatisfaction, emptiness—any and all of the disordered passions we are capable of experiencing, all of them can be transformed into a passion for living the Good News and spreading word of God's mercy. How? When the Risen Christ appears to the fearful Mary's, they “approached [him], embraced his feet, and did him homage.” They go to Christ; they receive him as their Lord; and they give to him the honor and glory due his name. Do not be afraid. Do not be afraid of mockery or death; do not be afraid of your failures, or your flaws. Joy overwhelms fear. Joy overcomes all obstacles, breaks all barriers. Set your minds on the sure knowledge that Christ's victory is complete. Death is defeated. You have died in Christ. A new life in him awaits. The battle is won; the war is over. Victory goes to our King. From an empty tomb, victory has always and will always go to the Risen Christ!
___________________ 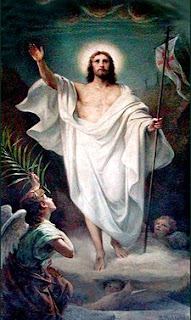