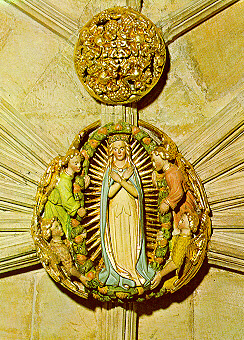 “I don’t know” and “I promise” are the two most oft-repeated sentences in Cormac McCarthy’s novel, The Road. A man and his ten-year old son travel a road in a post-apocalyptic world. Everything is burnt to ash and poisoned. Remaining are Good Guys and Bad Guys. Bad Guys hunt other humans for food. And the Good Guys run. And occasionally roast over an open fire. All through the novel, as the man and his son travel along the road, the son questions his father about the the right and wrong of surviving. More often than not the father, in the post-trauma of witnessing his entire world destroyed, simply says, “I don’t know.” Since the father no longer knows what is true, good, or beautiful, he begins to build a two man civilization on the power of another sentence, “I promise.” And the son, hearing this tiny silver of hope over and over again, responds each time with the universal fiat of a near exhausted faith: “OK.”

In a novel or movie or dream, there might be a world where Divine Love does not animate all life; does not lift up and bring forward His children; does not create and re-create in His image and likeness. A world not haunted by the spirit of holiness would be that sort of world where ignorance of living beyond life and death would be fundamental and the only way up and forward would be the promise of other creatures. That is dismal. And no way to live. But how precarious is it for us to live on promise in this real world of ours? Haven’t we all here surrendered our lives—body and soul—to what we hope is a Divine Lover? Haven’t we all here submitted ourselves to His obedience and service after just a promise? Yes, we have. And no, we haven’t. Yes, there is the promise but there is more than a promise. We have been shown the promise in action—twice.

This feast today is a feast of promise, sure; but it is also a feast of transfiguring revelation, of God’s promise to us shown to us in the raising of Mary to heaven, her resurrection to His promise of glory fulfilled. Paul says that “Christ has been raised from the dead, the firstfruits of those who have fallen asleep.” Christ is the first of those raised. Mary is the second. And the Church will be the third. Follow here: Christ, Mary, the Church. Christ is the Son of the Father. Mary is the mother of the Son. The Church is the body of Christ, his brothers and sister in faith. Therefore, Mary is the Mother of the Church, the body of Christ, and we are children of the Father. We inherited the Father’s promise of resurrection in Christ through Mary. And her assumption into heaven, her resurrection, is our sign of God’s promise done. Like her Son who was transfigured on Mt Tabor, our Blessed Mother’s assumption is a transfiguring revelation, that sort of unveiling of truth that both educates and changes, informs and transforms. We do not celebrate a pious legend today but a divine promise shown to us to have been fulfilled. This is the end of us all!

In her fiat to the archangel’s announcement of her pregnancy, Mary sings out her people’s salvation history, the theodicies of God’s love for us, His interventions and interuptions in our time and place. He shows us His love. And reminds us of His promise of mercy, the promise He made to Abraham and his children forever. Mary is answering with more than a hesitant “OK” or a bored, whispered “whatever.” She is saying yes to it all—everything of the Father’s plan for her, for us. She knows. She knows. And she says yes. So then, how precarious is it for us to live on a promise in this world of ours? Here’s how: if you aren’t living on the promise of the Father, then you are living in the ignorance of the Enemy, traveling a burnt and poisoned road, just waiting for the Bad Guys to hunt you down and spit you like a pig.