A report on the upcoming inter-religious meeting in Assisi.  The Vatican is going out of its way to avoid anything that even looks like syncretism.
OWS creating another failed Socialist Paradise in Zuccotti Park. . .be sure and read the New York magazine piece about the growing fascism of the Occupy Elite.
And check out this post on how the Occupy Baltimore camps are bickering over sexual harassment, internal violence and dissident, and whether or not Occupiers should involve the police.
A Shakespeare Insult Kit. . .read this, you goatish elf-skinned flap dragon!

A visual depiction of the definition of the phrase, "impending doom."

Normally, I'd say that this is a false dilemma. . .but it's So Right.

Objects on the rear-view mirror may appear more simian than they really are. . .or not.

Philosoraptor asks a really good question. . .of course, he's making a Wittgensteinian assumption about the relationship btw language and thought.

Stare Dad on the proper way to parent during those sibling rivalry years.

Occupy Movement --> Lord of the Flies


One Oakland police officer, who asked to remain anonymous for reasons of police protocol, described the scene in tent city as akin to a scene from "Lord of the Flies." And, indeed, the on-the-fly rule-making can often veer into an oppressive, anarchic mood.
Journalists are routinely shooed away and told off by angry residents. One Oakland police supervisor said that the participants first appeared to him as "freethinking activists" but have since devolved into something more sinister. He said it was "interesting for a group that claims to be against current civilization and rules to set up a far more oppressive society than our own."


Anyone who's paid the least bit of attention to the current state of leftist politics in America will not be surprised to learn that these free-thinking, free-love, anti-capitalists are swifly turning into run-of-the-mill fascists.

The lesson to be learned here is quite simple:  no civilization can be absolutely tolerant and expect to survive beyond a generation.

These OWS protests are only possible within the political framework of a western, liberal democracy that has been built and maintained by some form of free-market capitalism.

--the abundant use of technology in the protests (corporations) and the decidedly middle-class fashion sense of the occupiers, including their pricey accessories. . .

--the charitable contributions of food and money to the protesters (someone had to own it before it could be given to them). . .

--the protesters depend of the lawful behavior of those who oppose the OWS ideology, or have just been inconvenienced by their antics. . .

--the protesters rely almost entirely on a western, liberal, democratic sense of what is right and wrong within their occupations zones. . .

--the restraint shown by business-owners, the police, politicians, and the media in criticizing their goals (whatever those are). . .
The fact that these occupation zones are becoming hotbeds of criminality and reactionary fascism should be a bleak warning to all of us who hope to thrive in free society.
Follow HancAquam & Check out my Wish List --------->
at 5:39 AM 5 comments:

Which presidential candidate is wholly owned by Wall St.?
While the rest of the country suffers economically, gov't salaries place D.C. at the top of the heap.

The Noose of Diversity and Tolerance tightens around the Church's neck.
Looks like the adults are in charge in Greece. . .maybe they could lend the U.S. a few politicians.
Back when protests really meant something.
What happens when we let Oprah direct the Zombie Apocalypse?  The Walking Dead.
For a really brainy Zombie movie, check out Pontypool.   French post-structuralist linguistic theory has never been this creepy!
Comparison chart for various editions of the new English Missal.  Most of the illustrations are beautiful!  The Liturgical Press editions' pics leave much to be desired.  Can you say, "1973."
Some OWS protesters are a little miffed that their fellow protesters won't get off their rear-ends and help clean up.  Apparently, these Nazi Clean Freaks don't understand the psychology of the dependent class.
Rape, assault, theft, gun-toting felons, racism, riots, indecent exposure, media fraud, Trust Fund Baby freak-outs. . .yea, this is a perfectly sane political movement.
B.O. energy dept. caught editing its press releases from months ago.  Why?  To cover up its ties to yet another failed eco-trendy solar power company, SunPower.
Costs for Public School Students vs. State Prisoners in MN. . .yea, but the prisoners don't have to suffer with teachers' unions.

Here's a video of thugs in Rome smashing a statue of the BVM.   I can't tell where he gets the statute from.  Doesn't look like a Church, but it could any one of a number of side chapels or shrines.

It looks like some in the crowd chase the guy down, but it's hard to tell.

Witches vs. Zombies!  A no contest fight in my mind.

Coalition of charity and minority groups pressure the L.A. teachers' union for change.  This should be interesting.

Yet another reason to dismantle the U.N.:  the hierarchy of the Church of Global Warming caught hiding evidence of their scheming.

The gates of hell shall not prevail:  persecution of the U.S. Church?

On docility and obedience:  how "magisterial minimalism" hardens the heart.


OWS protesters stealing from one another. . .well, how does one "steal" from another when everything belongs to everyone equally?  NB.  one protester had her $5,500 Macbook stolen!
On the economic ignorance of those who would solve our economic problems. . .
Fortunately, your average American voter isn't buying what OWS is selling.
400 allegations of sexual abuse at religious schools in the U.K. . .but it's OK b/c they are Muslim schools.  Expect wide media coverage. . .
The Arrestables at the OWS protests. . .apparently, organizers pick and choose among the protesters who will be arrested that day.  Geez, this whole thing is One Big Theater Performance.
That's one way to dry your dogs. . .
Terrorists are starting to specialize.
Follow HancAquam & Check out my Wish List --------->
at 12:53 AM No comments: 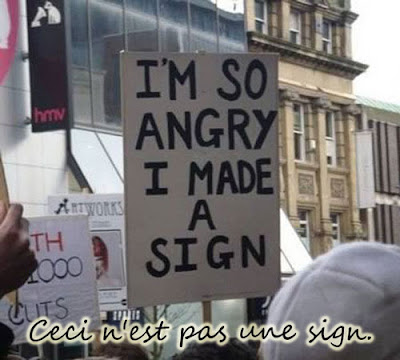 The caption on the pic above reads, "This is not a sign."  This refers to Rene Magritte's (in)famous painting of a tobacco pipe, La trahison des images. 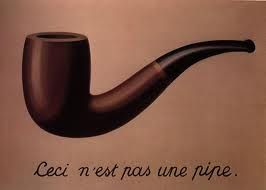 The sign in the top pic seems to be a snarky comment on the shapeless and impotent rage of the Occupy Wall St. protesters. . .a bit of too-clever mockery maybe?
The picture of the sign and its Margrittesque caption seems to be a wry comment on the careful media manipulation of OWS's public image.  The message from the media to us is:  "You are not seeing what you are seeing.  Let us show you what you are seeing."
Follow HancAquam & Check out my Wish List --------->
at 2:01 PM 2 comments:

Bipartisan support for Occupy Wall St. . .both the Communists and the Nazis give their seal of approval to the OWS!  They must be so proud.
And now B.O. is signing on to the Temper Tantrum.  How much longer 'til we can get the adults back in charge?

Leaked emails reveal that MSM "journalists" are colluding with the Occupy Wall St protesters to craft a positive media message.   So much for this being a Grassroots Uprising.

OWS video star is a Columbia Univ grad student with a trust fund.  NB.  the video is funny, but the language is NSFW.

Catholics Do Not Worship Idols; Or, The Bible Does Not Forbid the Use of Images.

Speaking of "these hands were made for chalices not calluses". . .

Leaving Mass early. . .or not. 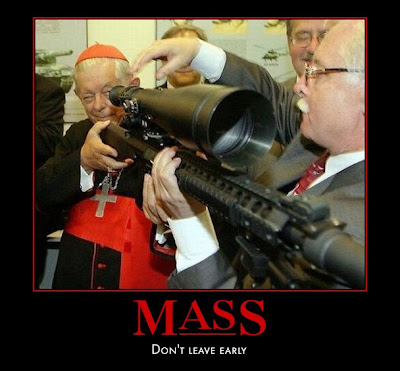 When you decide to leave Mass early, be sure and run in a zig-zag pattern.

"Rioting" in Rome is like professional wrestling in the U.S. . .fake but still dangerous.
How is it fake?  You have to keep in mind that Italy is a wholly owned subsidiarity of labor unions.  So, when the transit workers' unions "riot," they are met by the public safety workers' union (i.e. the cops). In some ways this is a good arrangement b/c the violence btw Rioters and Cops tends to be relatively low-key.  Watch a few videos of recent Roman riots and notice that the cops go out of their way not to get too rough.  The same courtesy is extended from the other side. Usually you get some tear gas, a few night-stick injuries, some minors cuts. . .nothing too serious.  Back in Dec. 2010 it was obvious from news video that neither the protesters nor the cops were much interested in a clash.  Both sides advanced and retreated when necessary to avoid excessive violence (02:00).
Despite the unspoken agreement not to let the violence get too serious, individuals and radical groups do cross the line and people get genuinely hurt and even killed.  Yesterday's violence in Rome is an example of this.  An otherwise routine Saturday protest was infiltrated by the so-called Black Bloc Guerrillas (those guys in the black masks and helmets).  This group's only purpose is property destruction.  Burn a few cars, break a few windows, dump garbage on the street.  Yesterday some of them got inside St John Lateran and made some noise.  They broke a statue of the Blessed Mother outside (00:30).  I doubt that they set out to kill anyone, but burning cars in the street often has unintended consequences.
Professional wrestlers in the U.S. often get hurt and sometimes even killed.  But the whole performance is carefully choreographed and managed.  Before the manifestazioni take place, notices are placed in all the major newspapers letting folks know when and where things will likely get rough.  Lists of potentially stalled bus and metro lines are published.  The police are out early to block streets and corral pedestrians.  Helicopters are sent up to watch over the protests.  Media types are given notice so they can get their pics and vids for the news.  It's all very civilized.
So, what's my point?  Protests and riots in Rome are a form of public performance art.  A distraction that sometimes gets a little out of hand.  They do not express a general unhappiness with the State nor do they lead to fundamental political change.
Follow HancAquam & Check out my Wish List --------->
at 12:42 AM 2 comments: