NB.  If I owe you a response in the combox or a reply to an email, please bear with me!

I will respond today (Sunday) after I finish up with Masses here at the priory and at the Oratory.

The next time you hear or read some blowhard like Maher or Dawkins spouting off about how dangerous religion is to civilization, point them to this article, "Mao's Great Leap Forward. . ."
Excerpts:


Mao Zedong, founder of the People's Republic of China [and noted atheist], qualifies as the greatest mass murderer in world history, an expert who had unprecedented access to official Communist Party archives said yesterday.
[. . .]

Mr Dikötter, who has been studying Chinese rural history from 1958 to 1962, when the nation was facing a famine, compared the systematic torture, brutality, starvation and killing of Chinese peasants to the Second World War in its magnitude. At least 45 million people were worked, starved or beaten to death in China over these four years; the worldwide death toll of the Second World War was 55 million.
[. . .]

State retribution for tiny thefts, such as stealing a potato, even by a child, would include being tied up and thrown into a pond; parents were forced to bury their children alive or were doused in excrement and urine, others were set alight, or had a nose or ear cut off. One record shows how a man was branded with hot metal. People were forced to work naked in the middle of winter; 80 per cent of all the villagers in one region of a quarter of a million Chinese were banned from the official canteen because they were too old or ill to be effective workers, so were deliberately starved to death.

[. . .]
So, do not let go unchallenged the assertion that religion has been the cause of the world's greatest acts of violence.  As the Holy Father noted yesterday at Westminster Hall:


Without the corrective supplied by religion, though, reason too can fall prey to distortions, as when it is manipulated by ideology, or applied in a partial way that fails to take full account of the dignity of the human person.  Such misuse of reason, after all, was what gave rise to the slave trade in the first place and to many other social evils, not least the totalitarian ideologies of the twentieth century. This is why I would suggest that the world of reason and the world of faith – the world of secular rationality and the world of religious belief – need one another and should not be afraid to enter into a profound and ongoing dialogue, for the good of our civilization.
Follow HancAquam ------------>
at 12:27 AM 3 comments:

Yawn.  Assorted child rape advocates, atheists, pro-abortionists, and science worshipers sign a letter protesting the Holy Father's visit to the U.K.   Folks, he's here.  Get it over it.
Fr. Z. has done his homework:  the nefarious associations of the letter signers.  Sorry.  But when a man who advocates lowering the age for sexual consent to 14 tells me that the Church is evil for covering up the sexual abuse of minors, I get this strange sense of incredulity.  Hypocrite, anyone?
His Hermeneuticalness provides a few random links on the BXVI visit to the U.K.
A down and dirty media guide for covering the Pope's U.K. visit.
Apparently, our First Whiner doesn't like her job.  No worries, M.O.  You won't have the job much longer.  The White House denies that M.O. hates her job.  Doesn't really matter.
French prez is upset with the E.U. for trying to interfere with his gov't immigration policies.  Note to Sarkozy:  if you hire a nanny to raise your kids, don't be surprised when she tries to interfere in family business.  The only solution?  Fire her.
No More Control.  "Political control is what’s killing us.  It is expressed in hundreds of ways: high tax rates with carefully tailored exceptions, massive bailouts, laws rigged to favor government-controlled industries, restrictions on resource development, and a vast poppy field of subsidies and penalties.  The Democrats have added thousands of pages of fabulously expensive legislation since Obama took office.  Two messages echo through those pages: Obey and be rewarded.  Resist and be punished."
A most excellent idea!  Give states the power to repeal Congressional legislation.
Good article on the Nashville Dominican Sisters
Sometimes it's better not to microwave your pet hamster.
Cute pic of the day
Tech support for upgrading to Husband 1.0.
Follow HancAquam ------------>
at 3:00 AM No comments:

On London, gossip, food, and being lost

How did yesterday's trip into London for dinner with Fr. Gaine and Anna Arco go?
Well, with company of such fine quality, how else could it go?  Fantastic!
The trip into London was long. . .three hours from Oxford to Victoria Station.  Took me a good 30 mins to find the stop for the 24 bus.  Once on the bus I knew the trip to St Dominic's Priory would take about 50 mins.  About half way through I decided to ask the driver if his bus stopped at the priory.  He gave me a blank look and said, "No."  Just as I was starting to despair, a quiet voice from behind me said, "Yes.  I'll show you."  Salvation!
The quiet voice belonged to a smallish woman with a Irish accent.  She described the priory in detail and told me that I had a ways to travel.  When a seat opened up next to her, I plopped down and started chatting.  I'm from Mississippi; it's what we do.  Within seconds she asked if I were a Dominican friar and told me that she attended Mass at St Dominic's.  She knew all the friars there and ones who had lived there for the past twenty years or so.
The conversation turned to the papal visit and her voice dropped.  She glanced around suspiciously and confided to me that she was very anxious about the visit.  The media had been relentlessly attacking the Pope and the Church for several days.  She sounded a but depressed by the whole thing.  I told her to ignore the idiots and enjoy His Holiness' visit.  We parted at my stop and she seemed a little happier.
Fr. Gaine met me at the stop and we went on a tour of the area. . .a sort of trendy/posh/artsy neighborhood called Gospel Oaks.  Another short bus trip took us into the Camden Market and The Stables.  These are a combination of street markets, covered stalls, and specialty shops that sell to the rigorously uniform Bohemian crowd.  Apparently, revolting against The Man is a business, one ruled by the unbreakable laws of Not Bathing, Smoking Constantly, Eating Strange Cuisines, and Buying/Selling Heathenish Trinkets.  All that rebellion amounts to a dress code of baggy pants, commie tee-shirts, vintage shoes, ridiculous hats, and obscure music.  Lots of Buddhists paraphernalia.  Lots of Rasta junk.  Lots of incense, bells, CD's from Africa, and herbal remedies.
After the markets, Fr. Gaine and I tucked into plates of fish and chips and beer.  In true Dominican style we discussed our latest academic projects and caught up on the whereabouts of several mutually acquainted friars.  A short respite back at the priory and then off to Leicester Square and the required tour of book stores.  Another pub break to people watch at Charing Cross as we awaited the arrival of our hostess, Ms Arco.

Anna arrived on her bike, wearing these knee high velvet boots. . .bright red!  Very striking.  I listened to some gossip about the Papal Visit. . .mostly the ineptitude of the bureaucrats of the bishops' conference and how the gov't's "security concerns" seem to be mostly about restricting the public's access to the Holy Father's appearances.  We headed off to a burger joint and ate these enormous "gourmet burgers."  I gave my American Seal of Approval to these concoctions and then we retired to yet another pub to top off the evening with a few pints.
Anna loves corny puns and jokes, so Fr Gaine and I were regaled with several.  Groans and laughs all around.  I shared my favorite joke, which was immediately labeled "mean" amid much laughter.  We parted company and I was left at the 24 bus stop to make my way back to Victoria Station.  That was around 9.30pm.  Once at V.S. it took me an hour to find the stop for my Oxford coach.  I asked no fewer than four V.S. employees where the coach picked up and received no fewer than five different answers.  Finally surrendering to a bad sense of direction and near night blindness, I wandered over to the main coach terminal and watched the 11pm coach to Oxford pull out!  The next one was to leave at 11.30pm.  I made it onto this one and arrived back in Oxford at 1.10am.
Overall, excellent food and drink.  Better company.  A day better than well spent.  Now, back to work!
Follow HancAquam ------------>
at 2:59 AM 3 comments:

Beatitudes and Beads: my new booklet on the rosary 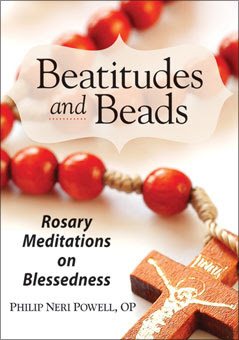 Liguori Publications has published my rosary booklet, Beatitudes and Beads.

The booklet contains an original rosary with prayers and meditations based on the Sermon on the Mount.
It is available in English and Spanish.

Christians rip up an English copy of the Koran.   Why is this a bad thing?  Muslims frequently burn Bibles, crosses, even Christians!  Tit for tat is not the Way of Christ.  The Koran is holy to all Muslims not just the raging, sword-wielding fanatics we see on TV.  (NB.  I'm told that Muslims only revere the Koran in its native language. . .translations are considered bastardized.  But to the fanatics, it's the thought that counts.)
Stephen Hawking doubles down on stupid:  "God may exist, but science can explain the universe without the need for a creator."  Yes, it can.  That's what science does:  explain stuff w/o reference to God.  What Hawking's science cannot do is explain stuff that science is not design to explain.  Why this is so difficult for him to understand is beyond me.  He's using a hammer to explain how gumbo is made.
Just a few myths about 9/11.
On Sarah Palin and Leftist status anxiety:  "Palin’s success stabs [Leftists] in the heart of their anxiety. If Palin can be a successful political leader, what does that say about the leftists’ claims of intellectual and moral superiority?"  Easy.  They are neither intellectually nor morally superior.
B.O. vs. W. on the War on Terror. . .apparently, B.O. is as bad or worse than W. when it comes to all the things that the Left hated about W.  Um, where the media outrage?
Venezuela's Clown-in-Chief is losing his Shine. . .it's never a good sign for the Prez when the only way you can convince people to follow you is to shut down opposition.
Can you hear the Zombies stirring?  Me too.
Muslims stab and beat Christians. . .expect an outraged editorial from the NYT any second now.  Headline:  Why Didn't They Finish the Job?
Someone, please, nominate this man for the GOP ticket in 2012!
How to kill a spider. . .all his hopes and dreams.
A new phrase for commenting on politicians' B.S.:  "Deja Moo: The feeling that you've heard this bull before."  And 19 other puns.
Cute pic of the day
On the perils of putting playground equipment in your goldfish bowl
Follow HancAquam ------------>
at 12:53 AM 22 comments: