Check it out and don't forget to give God thanks and praise for His beautiful creation.

Dorthy Day: "To me, birth control and abortion are genocide."

Secular and Catholics Progs are wetting themselves today b/c Pope Francis mentioned Dorothy Day in his address to Congress.

To hear them -- the Progs -- tell it, the Holy Father just endorsed all their fav Pelvic Freedoms.

As usual, they only tell the part of Day's story that fits The Narrative.

From her autobiography, The Eleventh Virgin:


I'll never forget the time that I had to literally stand up against birth control. My sister Della had worked for Margaret Sanger, foundress of Planned Parenthood. When Della exhorted me that I shouldn't encourage my daughter Tamar to have so many children, I stood up firmly and walked out of the house whereupon Della ran after me weeping, saying, Don't leave me, don't leave me. We just won't talk about it again. To me, birth control and abortion are genocide. I say, make room for children, don't do away with them. I learned that prevention of conception when the act that one is performing is for the purpose of fusing the two lives more closely and so enrich them that another life springs forth and the aborting of a life conceived are sins that are great frustrations in the natural and spiritual order.

The Sexual Revolution is a complete rebellion against authority, natural and supernatural, even against the body and its needs, its natural functions of child bearing. This is not reverence for life, it is a great denial and more resembles Nihilism than the revolution that they think they are furthering.

Titles for the paintings?

A reader left a comment on my most recent paintings post. . .I hit "delete" instead of "publish."


Anyway, the gist of the question was: "how do you come up with titles for your paintings?"


Well, I use a carefully crafted algorithm that calculates the pigment tones. . .just kidding. . .


Basically, on the day I post the paintings, I look at the Mass readings for the day and pick out words or phrases that strike me.

Those words/phrases become the titles of my paintings.

9 Things to Remember During the Pope's Visit

The MSM is already pushing it's Francis vs. the Tradition narrative. With lots of Benedict XVI vs. Francis thrown in for good measure.

1). Trust NOTHING you see or read from the MSM. Assume that you are being lied to. Reporters do not and will not understand the faith. Their entire worldview is informed by leftist American politics and anti-Catholic bigotry.

2). Verify EVERYTHING you see or read with official Catholic news sources, specifically, the Vatican's press office.

3). Do not share any MSM reporting until you know for a FACT that they are telling the truth. You do not want to contribute to the lie that Pope Francis is somehow undermining the Tradition.

4). Carefully consider your "Catholic" sources of info. Pretty much all reporting and commentary coming from America Magazine, Commonweal, U.S. Catholic, and the National Catholic Reporter will be skewed toward promoting a dissident agenda.

5). Carefully consider the motives and agendas of Catholics who are asked to comment on the Pope's visit. Having "Sister" or "Father" or "Dr." in front of a name doesn't automatically confer infallibility on an individual.  The MSM have a tiny cadre of reliably dissident Catholics they call on for commentary.

6). Assume that everything the Holy Father says and does is in defense of the faith and pushes the gospel forward. IOW, resist the temptation to hear/read him as an "agent of change." This is the MSM narrative.

7). Also resist the temptation to hear/read the Holy Father in terms of the American culture war and our dysfunctional national politics. Doing so buys into the MSM narrative that the Pope is just a politician.

8). Remember: in our faith there is no contest between holding fast to the apostolic faith and serving the oppressed. Dividing the two and putting them in conflict is a demonic strategy to divide us.

Receive Christ among the least

I lost a few dozen friends yesterday. Mostly people I've never met. Facebook friends. One of these “friends” attacked someone I do know in person, calling her a “sheep in the flock of Satan” b/c she suggested that he lacked a sense of humor. Another facebook friend insisted that Pope Francis is a communist infiltrator bent on destroying the Church. Still another one kept harassing me as a “Republican stooge” b/c I think Planned Parenthood should be defunded for trafficking in harvested human organs. It was an exciting morning. The saddest part for me – as a priest – is that most of those causing me so much anguish on facebook are Catholic. Anti-Pope Francis Catholics. Pro-abortion Catholics. Holy-than-the-Blessed-Virgin-Mary Catholics. Anti-everyone-who-doesn't-agree-with-me-100%-on-every-issue Catholics. I kept thinking: the Devil must be laughing himself silly watching us bickering over who's the Real Catholic! Jesus tells his disciples what's waiting for him in Jerusalem: betrayal, death, and his eventual resurrection. They didn't understand any of this. When they arrive in Capernaum, Jesus asks them, “What were you arguing about on the way?” They were arguing about which of them would be the greatest in his kingdom.

Things haven't changed much in 2,000 years. Jesus reveals to his friends what will happen to him at the end of this trip. He will be handed over to the authorities, beaten, killed, and three days after, he will rise from the tomb. This is astonishing news. But rather than spend their time asking Jesus questions about the Good News, or planning out how they would survive w/o him, the disciples bicker over who's going to be the greatest among those Jesus leaves behind! Seriously. You have right there with you the long-promised Messiah, the Savior of Mankind, your teacher and friend, and he tells you that he's going to be murdered and then resurrected, and all you can think about is who's the Best Disciple Ever!? Who's the Boss? And here we are 2,000 years later bickering over who's the Real Catholic; who's inside the Church, who's outside; whether or not the Pope is really the pope; which cardinal or bishop is trying to influence the upcoming Synod. Jesus doesn't rebuke his disciples for being so astonishingly petty. He doesn't rebuke us either. He says to them and to us, “If anyone wishes to be first, he shall be the last of all and the servant of all.”

When Jesus asks the disciples what they were arguing about on the way, the gospel tells us that “they remained silent.” First smart thing they've done on this trip. Why are they silent? B/c they are embarrassed. They don't understand most of Jesus teaches them. They aren't courageous enough to ask him questions. However, they are ambitious enough to jockey for power behind Jesus' back. Jesus deals a lethal blow to their ambition when he reveals to them that the greatest among them will be the servant of all. To make his point, he puts a small child in the middle of the group and says, “Whoever receives one child such as this in my name, receives me. . .” Whoever takes in the lowest, the least powerful, the weakest, the most humble, the most vulnerable, the smallest in the world's eyes receives Christ himself. In the world, to the world there is nothing more useless than the weak, the powerless, those who simply do not count as Worthwhile. But to Christ, these are the ones – the little ones – who will take us to heaven. These are the ones who will open the gates and let us in. While we bicker with one another about purity and politics and conspiracies, the little ones all over the globe are standing ready to welcome us to Christ. Will we receive them? If not, we should follow the example of the disciples and remain quiet in an embarrassed silence.

My facebook drama over the weekend was prompted by discussions of the Holy Father's visit to D.C. and NYC. He has more traditional Catholics upset with his talk about climate change and the abuses of capitalism. He has more progressive Catholics upset with his talk condemning same-sex “marriage” and abortion. If you follow news about Pope Francis' sometimes “off the cuff” remarks you know that our media are delighted to misreport and misinterpret just about everything he says and doesn't say. I'm betting that this week our TV's and newspapers will be stuffed with all sorts of fables and fairy-tales about the Pope saying and doing this and that. The Holy Father is coming to the U.S. to carry out his ministry as the successor to St. Peter, his apostolic duty to bear witness to the Good News of Jesus Christ. He's coming to remind us that if we hope to receive Christ, we must receive the least of God's children. He's not coming to endorse politicians or approve of public policies or condemn impure Catholics. He's coming to do the job the Holy Spirit gave him to do: to preach and teach as Jesus himself preached and taught. Nothing more, nothing less.

What will we do during the Pope's visit? How will we receive his message? James scolds the Jewish Christians: “Where jealousy and selfish ambition exist, there is disorder and every foul practice. . .Where do the wars and where do the conflicts among you come from?” Sound familiar? The Greek James uses in his letter tells us that the conflicts in the Church then were bloody fights, serious maiming and killing among various factions. What were they fighting about? We don't know the specific issues, but James' language tells us that there were those who wanted to impose their personal preferences on the whole Church; fights over who would be in charge; and fights started by public criticism of Church members. IOW, those who wanted their own way regardless of costs; those who wanted authority and power; and those who didn't want to live up to the moral law. Maybe James wrote his letter to the American Church!
Will the Holy Father's visit be a time of disorder for the Church? Or will the factions among us manage to set aside jealousy and selfish ambition to receive him as the Vicar of Christ? That's a question too big for you or me to answer. Let's ask it this way: how will you, how will I receive the Holy Father this week? Can I set aside ambition and ideology and the need to be right and welcome his message. Can you? Can we receive him like a little child, welcoming him into our national family as an apostle? Can we listen – truly listen – to what he has to say and give it the weight his office deserves? If we will be followers of Christ, children in the kingdom, then we must set aside the measures of this world and hear with the ears of faith. The world tells us to see everything in terms of politics – money and power. The world tells us to hear everything in terms of prohibition or permission. Christ tells us to receive him in the least of his. That's the fruit of righteousness and the way to peace.

All of these paintings are acrylic on canvas panels 18 x 24. 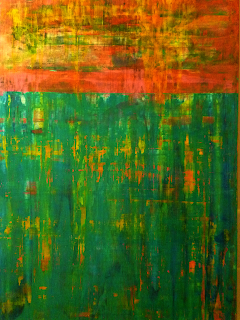 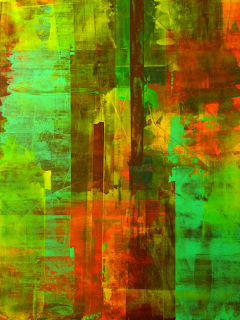 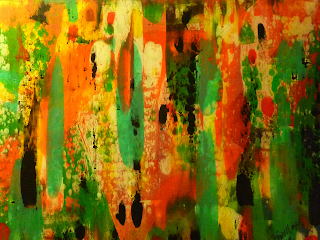 Jihad at the Circus 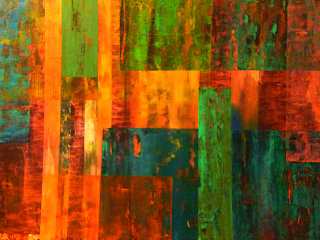 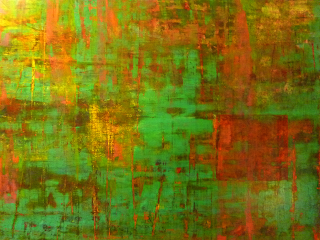 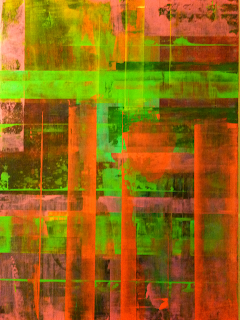 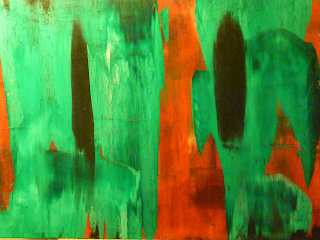 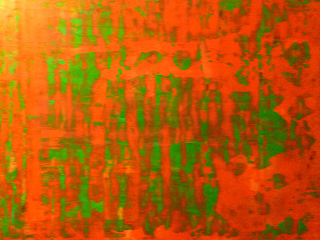 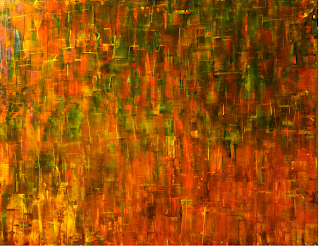 Worthy of the Call 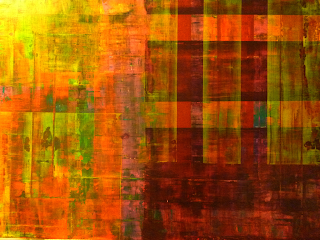 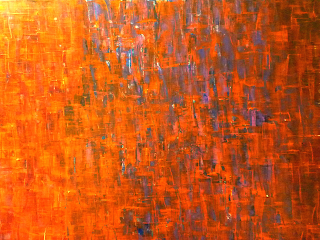