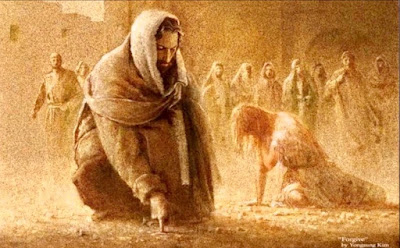 You've seen those cop and courtroom shows where the lawyer asks the hostile witness a damning Yes/No question. The witness starts to give a detailed answer and the lawyer yells, “Answer yes or no!” The witness reluctantly answers either yes or no and the lawyer smiles, looks knowingly at the jury, and dismisses the witness. This is the sort of drama the scribes and Pharisees try to pull Jesus into. This woman was caught in the act of adultery. Should she be stoned to death? Yes or no?! Fortunately, for the woman, Jesus is no easily intimidated witness. He is the Just Judge who sees into the hearts of both the woman and her accusers. Jesus does what he always does when his enemies try to corner him with lawyerly questions – he asks one of his own: who accuses her? Where are her accusers? Let them cast the first stone to put her to death. While he waits for the stones to start flying, Jesus writes in the dirt. John doesn't tell us what he writes. In the meantime, no stones are thrown. No one speaks against the woman. Slowly, the mob slinks away, beginning with the elders. Then, justice and mercy come together and the woman is sent on her way with a admonition to sin no more.

What just happened? Is Jesus teaching us that adultery isn't a sin? No. Is he saying that the woman was innocent of the sin? No. Is he telling us that as sinners ourselves we cannot call sin Sin? No. To understand this bit of drama we need to understand Jewish Law. It takes two to commit adultery. Where was the woman accomplice, the man? According to the Law, he is subject to stoning as much as she. The one who witnesses the sin must make the public accusation. Where is the witness/accuser? If the accused is found guilty, the witness/accuser must throw the first stone, i.e., be the one to execute the guilty. The scribes and Pharisees make the accusation, but they did not witness the sin. No one in the crowd witnessed the sin. Jesus knows this. So, he dares the crowd to make themselves into sinners, criminals by executing the woman in violation of the Law. Nothing in this bit of drama says that adultery is anything but sinful. Nothing says that sinners can't or shouldn't call sin Sin. What this bit of drama says is that if you are going to use the Law to condemn a sinner, you'd better be following the Law yourself. Sin is sin. Sinners are persons. Call sin Sin. Call persons forgiven.

Jesus dares the scribes and Pharisees to follow the Law. They can't. Doing so would condemn them under the Law. To underscore his own accusation of hypocrisy, Jesus writes in the dirt. The Law forbids writing on paper on a holy day but allows writing in the dirt. Though John doesn't tell us what Jesus is writing, tradition tells us that he is alluding to the prophet, Jeremiah. Jeremiah cries out, “The rebels shall be enrolled in the netherworld.” To have your name written in the dust is to be enrolled in the netherworld as a shameful rebel against God. The woman's accusers watch Jesus writing in the dirt; remember Jeremiah's righteousness cry to God; and then ask themselves: are we prepared to be consigned to the netherworld as rebels against God? “In response, they went away one by one, beginning with the elders.” Confronted—even subtly—by their own failures in holiness, the scribes and Pharisees simply fade away to plot another trap for the Lord. Jesus says to the woman, “Go and sin no more.” He grants mercy to the sinner, the person while naming sin Sin.

And that's the difference btw man's justice and God's mercy. Man's justice condemns both the crime and the criminal. God's mercy passes sentence on the sin and forgives the sinner. By forgiving the sinner, God does what God Is: Love. Forgiveness of sin, showing mercy to the sinner is in no way an admission that sin isn't Sin. The righteous do not need mercy, therefore, only the unrighteous may receive it; that is, only those found guilty of sin require mercy in the first place. It's vital to our growth in holiness that we understand how God's mercy relieves us of the burden of sin. The weight of disobedience is crushing. Under the heavy load of sin, we cannot follow after Christ; we cannot complete our mission “to go and do likewise” if we are suffering in slavery to our disobedience. This is why the Father sent to Son to lift this burden off our backs. Christ has removed the yoke of sin and we are now free to follow him. When Jesus refuses to condemn the adulterous woman all he is doing is freeing her so that she might choose to take up his yoke and do the joyous work of witnessing to God's mercy. Adultery is still adultery. But no sin—not even adultery—can forever chain a soul in servitude when the Father's forgiveness is freely offered and freely received.