Can you live and die for Christ? 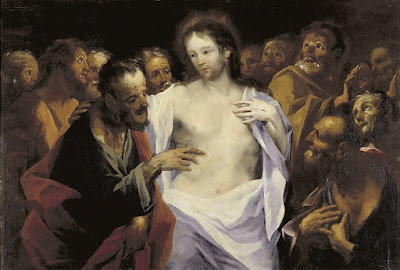 Just one week later and the scene is tense. The disciples are frightened and disbelieving, maybe even on the edge of freaking-out and abandoning the Gospel altogether. And who can blame them? For three years they've followed the man Jesus as he wandered the countryside teaching and preaching the conquering power of the Father's freely offered mercy. Healing the sick, exorcising the possessed, multiplying bread and fish to feed the thousands, the disciples had every good reason to trust that their teacher was exactly who he said he was. And then Judas sold him to the temple priests and the Romans nailed him to a cross. At the expected moment, when the Son of God should have come down from the cross and laid waste to his enemies with thunder and fire, at that moment, he instead cried out to his Father – Why have you forsaken me? – and died. Now his body is missing from the tomb and no one knows where they took him. Hunted as traitors and heretics, the disciples hide in fear, wondering what went wrong and why. To their surprise and shame, the resurrected Lord appears in their midst, and says, “Peace be with you.” Despite their lack of faith, their abandonment of hope, the Risen Lord shows them his mercy.

Or maybe he shows them his mercy b/c of their lack of faith and abandonment of hope? When Thomas the Twin returns to their locked-down hide-out, the other disciples bear witness to the Lord's appearance. He refuses to believe their testimony; he refuses to believe that the resurrected Lord appeared to them, showing them his wounds. In defiance and with all the arrogance of a modern American, Thomas announces, “Unless I see the mark of the nails in his hands and put my finger into the nailmarks and put my hand into his side, I will not believe.” One week later – this week – the Risen Lord appears again in their midst and again shows them the Father's mercy, “Peace be with you.” And rather than punish his arrogant disciple, Thomas, the Lord does the unexpected again. He relieves Thomas' disbelief in the only way that Thomas could accept: “Put your finger here and see my hands, and bring your hand and put it into my side, and do not be unbelieving, but believe.” The Lord's gift of Divine Mercy moves Thomas to an act of faith. He shouts, “My Lord and my God!”

We can sympathize with Thomas' disbelief. We can sympathize with his faith. No doubt each one of us have lived through days and weeks of disbelief, and days and weeks of vivid faith and hope. We can even sympathize with the frightened disciples, locked away in their hide-out. Over the centuries, the Church has thrived in hiding and barely survived out in the open. We've ruled empires and been ruled by them. We've shaped whole cultures and allowed ourselves to be shaped by them. Whether we are hiding in fear of the State or openly thriving in the marketplace, there is one constant that never fails us: God's enduring and freely offered gift of mercy for the forgiveness of our sins. That offer, this gift never changes. Our Lord always appears in our midst and says, “Peace be with you.” The stillness of that hope and the constancy of that faith pulls us to believe in him and belief in him gently lays us down with love. Thomas' arrogant demand for physical proof is born of fear. If what his fellow disciples tell him is true, then he is obligated to act, to change, to become someone wholly given-over to the power of Spirit who is Love. That commitment is more than just frightening; it's dreadful, filled with the possibilities and promises of giving testimony to an event he himself did not witness. Can he bring himself to live as a follower of Christ and die as his witness when he does not/cannot know if Christ is truly risen?

That's a question we must ask ourselves. Can we? Can I live as a follower of Christ and die as his witness when I do not/cannot know if Christ is truly risen? It's one thing to live as a follower of Christ, to live using his words and deeds as my model. It's a whole different kind of thing to die b/c I live according to his words and deeds. Thus, we are tempted to surrender to the world every day. And in small, quiet ways we do. We surrender a piece of our freedom in Christ every time we sin. We surrender every time we fail to bear witness. And it will all end in total surrender to the world if we do not surrender totally to Christ first. A total surrender to the world will not end the Church. The Church will always endure. What will come to an end is the life in Christ for those who give up, for those who – like Thomas and the disciples – choose despair over hope, choose hiding-in over going-out. When Thomas sticks his hand into Christ's wounds he shouts, “My Lord and my God!” What went on in his head during those seconds btw feeling our Lord's torn flesh and his confession of surrender? Maybe he realizes his mistake and repents. Maybe he feels ashamed of his denial. Maybe he is convicted in his heart that his mind is wrongly closed to believing what he cannot see. Maybe, just maybe his fear is given rest and his anxiety is appeased by the knowledge that his fellow disciples have testified in truth: the Lord is no longer in his tomb! Thomas is made faithful by the radical truth that his Lord and God is truly risen! Knowing the Risen Lord and believing in the Risen Lord makes Thomas a man-sent-out, an apostle. A man who is what he does and does who he is.

Each one of us is made faithful by the truth of the Risen Lord. If you come forward this morning to eat his body and drink his blood, you are putting your hands into his wounds. Do not be unbelieving but believe. Do not be unknowing but know. And ask yourself: if I can live as a follower of Christ, can I die as a follower of Christ? To say yes I can is the beginning of your surrender.