NB. I will be hearing confessions tonight at St. Dominic's from 7.00-9.00pm. Fr. Mike and I will be offering confession every Wednesday night at this time during Advent. 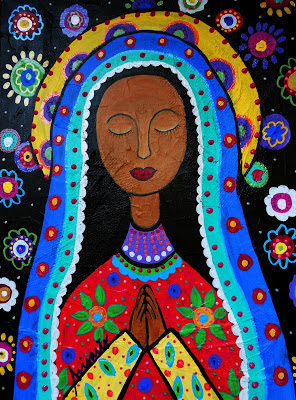 
Just last week—on the solemnity of the Immaculate Conception—we heard the archangel Gabriel declare to Mary, “Hail, full of grace! Blessed are you among women for you have found favor with God.” Tonight we read about Mary's visit to her elderly cousin, Elizabeth, a woman who's been barren her whole life and is now pregnant with John the Baptist. When Mary greets her cousin, John leaps with joy in his mother's womb. And Elizabeth, in a fit of wonder and faith confirms the angel's greeting to Mary, “Most blessed are you among women, and blessed is the fruit of your womb. . .Blessed are you [Mary] who believed that what was spoken to you by the Lord would be fulfilled.” Do you, like Mary, believe that what is spoken to you by the Lord will be fulfilled? And if you believe, do you act in the world as one who has been spoken to by God?

Elizabeth proclaims Mary “blessed” b/c she—Mary—believed what was spoken to her by the Lord would be fulfilled. And b/c she believes His word, she submits her will to the will of God and now carries in her womb the Word made flesh. For centuries, almost since the very beginning, the Church has held our Blessed Mother up as the model of Christian service, the model of what it means to say Yes to the Father's invitation to allow His Word to take root in the human soul. If Mary is the model of the faithful Church; and the Church is the Body of Christ; and we are all members of that Body, then it follows that Mary's fiat—let it be done to me according to His word—is also our response to the Father's invitation to welcome and allow His Word to take root in each one of us. If we hear this invitation and raise our own fiat, then Elizabeth's praise of Mary is also her praise for us: “Blessed are those who believe that what is spoken to them by the Lord will be fulfilled.” Likewise, Mary's response to Elizabeth's praise is our response as well, “My soul proclaims the greatness of the Lord; my spirit rejoices in God my savior.”

Does your soul proclaim the Lord's greatness? Does your spirit rejoice in your Savior? We can all understand why Mary would sing out like this. She's been visited by an archangel. She's been given the Son of God as her child. She's been favored above all women and called blessed. She's got every reason to say that her soul proclaims God's greatness and that her spirit rejoices in her Savior. Why would any of us repeat her proclamation? We've not been visited by an angel or given birth to the Word made flesh or been called blessed and most favored. Oh, but we have. Not in the same way that Mary was, but we have most certainly been given the Word made flesh and blood in the sacrament. And we've heard His Word spoken many, many times at Mass. The question is: do we believe that His Word will be fulfilled? Do we act in the world in a way that demonstrates our belief? If we do, then our souls do proclaim the greatness of God and our spirits do rejoice in our Savior. If you don't, if you don't believe and act on His Word, then there is a way to get right with God. Confession, repentance, and penance: receiving in the sacrament of confession the forgiveness won for us by the Cross and Empty Tomb.

Sin is the principal means used by the Enemy to prevent us from giving God his dutiful worship and from carrying out our vow to be Christs in the world. Plain and simple. Sin. Disobedience. The Enemy tempts, and we fall. But falling is never a reason to stay fallen. Get back up and receive all that Christ died to freely give you. God loves you and wants you to participate in His divine life. But He will not coerce you; He will not dominate or intimidate us into living with Him. He invites, seduces, exhorts, all but pleads. Confess, repent, and do penance so that you may follow Mary into blessedness.