However difficult: go to confession! 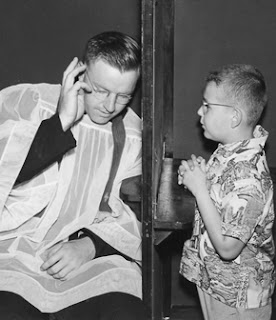 
The Lord and His creation is very busy: exulting, blooming, rejoicing, singing, strengthening, firming, seeing, vindicating, recompensing, opening, clearing, leaping, bursting, walking, meeting, fleeing. Isaiah prophesies the deliverance of Israel from captivity and exile. Not only will God's people be set free from their long alienation and returned home, the land itself will be rejuvenated, released from its droughted sterility and made again into a sign of divine promise. The fertile abundance of the promised land is God's promise of abundant fertility for His people. But being set free from slavery and exile—though welcomed—can be frightening. Restoring a lost nation and reviving the proper worship of God is daunting, scary. So, Isaiah prophesies, “Say to those whose hearts are frightened: Be strong, fear not! Here is your God, he comes with vindication; With divine recompense he comes to save you.” If the Church hopes to see her restoration, her revival, we will follow the example of the paralyzed man's friends and find a way—however difficult—to bring ourselves to the healing touch of Christ.

We started this Advent season two weeks ago on a rather dramatic note: John's visions of the apocalypse and Christ's own warnings of his second coming. Just yesterday—the 2nd Sunday of Advent—we heard read Isaiah's prophecy of John the Baptist's mission to preach repentance and baptize for the forgiveness of sins. This week we will hear Christ tell his disciples that he came to save the one sheep that gets lost. We'll hear Mary cry out her YES to the Father's invitation to become the mother of His Word. We'll hear Christ extol John the Baptist's prophetic ministry, and we'll hear him tell us that the worth of wisdom is to be found in her works. This week of Advent we will be shown again and again the need for turning ourselves toward the Lord and his Word; the need for receiving his mercy and love; the need for producing the fruits of righteousness in the world so that the world might see His glory and turn to Him as well. If you hope to see your faith vindicated, energized, you will follow the example of the paralyzed man's friends and find a way—however difficult—to bring yourself to the healing touch of Christ. You will find a way to make use of God's forgiveness and receive His mercy in the sacrament that reconciles us all to Him.

The man's friends are determined to get him to Jesus. The crowd is huge, thick. They can't get his stretcher through, so they climb the building and lower their paralyzed friend through the ceiling and rest him right in front of Christ. Jesus recognizes their faith and says to the man, “As for you, your sins are forgiven.” When the Pharisees object to this, Jesus, asks, “Which is easier, to say, 'Your sins are forgiven,' or to say, 'Rise and walk?'” To punch his point home, Jesus says to the man, “. . .rise, pick up your stretcher, and go home.” And he does. If God can restore a fallen nation; return its people to their land; and revive the fertility of that land; and if he can heal a man's paralysis by forgiving his sins, then restoring you to the abundance of His gifts is easy work. But it is a work He will not do without your help. Our sins are forgiven. Always have been. What we must do—however difficult—is confess those sins and receive the forgiveness we have been given. Then, like the restored promised land, we too can go exulting, blooming, rejoicing, singing, opening, clearing, leaping, bursting, walking, meeting, and giving Him thanks for His great mercy.
_____________