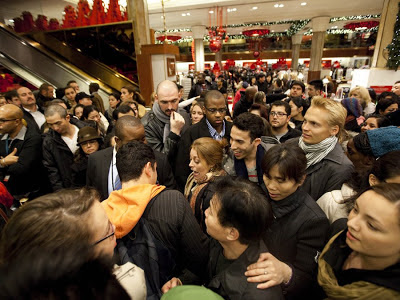 
Jesus preaches to the crowds, highly praising the missionary work of John the Baptist; noting, however, that the smallest saint in heaven is greater than he. Then our Lord says something truly puzzling, “From the days of John the Baptist until now, the Kingdom of heaven suffers violence, and the violent are taking it by force.” This pronouncement stumped me. The footnote for this passage in the RSV Catholic Study Bible reads: “Notoriously obscure.” Obscure. Notoriously so. Well then, we'll take the text at face value. Since Jesus is praising John the Baptist as an Elijah figure; and John's the first prophet to come along in 500 yrs (since Malachi in the OT), we can assume that Jesus is pointing out the ravening hungry God's people must be feeling for a prophet to appear among them, and that Jesus is describing their joy at John's arrival—a joy so hungry, so ferocious that it's comparable to a siege on a castle. In other words, John's short ministry of preaching baptism for repentance and the forgiveness of sins has produced a joyous assault on God's kingdom. John, the first prophet to prophesy in five centuries, announces the arrival of the long-awaited Messiah. . .and now God's people are storming the gates of His Kingdom. Would you have been among them?

Right after Thanksgiving, Black Friday, a damning photo circulated on the internet. On one side of the photo is a pic of a largely empty Catholic church during a Sunday Mass. On the other side of the photo is a pic of a scrambling, rioting hoard pushing its way into a Wal-Mart to buy cheap socks and gadgets. The caption on the photo reads: “Maybe the Pope should consider a Black Friday Sale.” You to have wonder what it would be like if American Catholics—all 66 million of us—would rush our parish church on a Sunday morning, bust down the doors, trample the ushers, and then get into fistfights over who gets to go to confession first and who's up first to take communion in a state of grace! It would be scary. But I'd like to see it. From a distance. So, why doesn't this sort of thing happen? Jesus is telling us that God's people in his day were doing violence to the Kingdom to get in. . .all b/c of John's preaching. Maybe we've come to believe that sin isn't much to worry about? Maybe we've become too confident of our eternal destination? Or maybe we've forgotten what it is that God's freely offers us?

Well, let's review. Isaiah prophesies, “I am the LORD, your God, who grasp your right hand; It is I who say to you, 'Fear not, I will help you.'” Who will help us? “Your redeemer is the Holy One of Israel.” And who will the Holy One of Israel help? “I will help you, says the Lord. . .” And why do we need help? “Fear not, O worm Jacob, O maggot Israel.” (That's not very flattering, but it does capture the depravity that God's people fall into on a regular basis). And how will the Holy One of Israel help us slugs? “I, the Lord, will answer the afflicted and the needy; I will not forsake them. I will open up rivers on the bare heights. . .turn the desert into a marshland. . .plant in the desert the cedar, acacia, myrtle, and olive. . .” And why will God do all this? “So that all may see and understand, That the hand of the Lord has done this. . .” The promised land is rejuvenated so that all may see the mercy of the Lord. If He brings a dead nation back to life, then He can certainly bring to eternal life one sinner or 66 million sinners. If God's people knew this and believed it—as firmly as they believe in the goodness of a Black Friday sale—the Kingdom would be under siege again. Do you make known the wonders God has done for you? WalMart advertises its low prices. Do you advertise the freely given gift of God's forgiveness, the gift we all so freely enjoy?
_____________