I think I shall praise it! 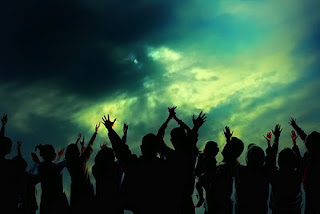 
Robert Hass opens his 1979 book of poetry, Praise, with an epigraph: “We asked the captain what course/of action he proposed to take toward/a beast so large, terrifying, and/unpredictable. He hesitated to/answer, and then said judiciously:/‘I think I shall praise it.’” The captain's awe-struck desire to praise so large a beast always brought to mind an image of Job standing before God in the whirlwind. Until this morning. Job questions God, presuming that his suffering entitles him to an explanation from the One who allowed it. Speaking Creator to creature, the Lord answers, “Tell me, if you know all: Which is the way to the dwelling place of light, and where is the abode of darkness, that you may take them to their boundaries. . .” I've always imagined that Job, like our awe-struck captain, would fall prostrate in praise. Instead, “Job answered the Lord and said: Behold, I am of little account; what can I answer you? I put my hand over my mouth. Though I have spoken once, I will not do so again. . .” Rather than praise a beast so large and terrifying, Job judiciously covers his mouth and vows himself to silence. Before the mighty works of God, under His even mightier Word, silence is the richest praise His creatures can offer.

Were you to suffer as Job has suffered and were you given the chance to demand a reason from God for your suffering, would you make such a demand; or would you remember Job's chastised pride and cover your mouth in awe? The idea of “suffering in silence” is not one we modern folks embrace with much enthusiasm. We are industrious complainers, founding whole factories to assemble our grievances against God, man, and country. It's repugnant to suggest that the best response to God's challenge—Who are you to question me?—is to cover our mouths and vow silence. It is even more repugnant to suggest that we praise God for allowing us to suffer. Praising a collaborator in our disaster and pain smells too much like submission, like a weak surrender. Aren't we more inclined to quote heaven's most beautiful angel, and defiantly answer, “I will not serve”? We are certainly free to shout a feeble non serviam at the whirlwind. We are also free to grant the beast of our suffering—so large, so terrifying and unpredictable—a word of praise. However, we are freest while suffering when we give God thanks for all His gifts, including the gift of suffering.

Yes, that's right: suffering is a gift. If you understand suffering to be the experience of pain, then you might think I'm crazy. But suffering is not the experience of pain. To suffer pain is to allow it, to give it permission to be. Job does not suffer well. His legendary patience is no where in sight as one disaster after another crashes into him. He tries surrender; he tries philosophy. Though his patience is tried by his well-meaning friends, he endures their arguments in vain. When he seeks an answer from God, he's rebuffed with a reminder that he is dust and wind living in an unimaginably complex creation, and wholly incapable of grasping the smallest truths of its boundaries. Job does not suffer well until he learns that humble praise is best given in silence. This is not the answer he thought he wanted. Nor is it the answer we hoped to hear. But what would we do with a reasonable answer to suffering, a sensible explanation for why we must endure pain and disaster? Would we accept it? Challenge it? Greet it with pride and derision? When we give God thanks for giving us the gift of suffering—the gift of choosing how we will experience pain and disaster—we embrace our truest freedom: the freedom to give Him praise and know that we are loved by the One who set the boundaries on all that is.
_____________