Your One Stop Spot for All Things St. Philip Neri. . . 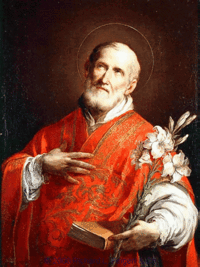 Basic biographical/historical info. . .NB. the entry under "Political Activity"
My favorite modern biography of Philip:  The Fire of Joy
St Philip Romolo Neri
A maxim a day keeps the Devil away!  Philip Neri sayings for everyday of the year.
EWTN: Philip Neri

Saint of the Day: Philip Neri, saint and joker

. . .and the Chiesa Nuova, Philip Neri's church in Rome. Only in Rome can you call a 16th century church a "new church"! Philip is buried in a side chapel there. I've visited frequently, asking for a better sense of humor for dealing with the enemies of the Church.

And today is my 46th birthday. My mother denies it, refusing to believe that she has a 46 year old son!  Though she did tell me on the phone recently that I am starting to look my age.

I am often asked why a Dominican would choose "Philip Neri" as his religious name. I wish there were some mystical, mysterious story to tell. There isn't. When I was going through RCIA, my pastor urged us all to take confirmation names. He suggested that we look at the saints honored on our birthdays for inspiration. He reasoned that picking a name from a saint celebrated on our birthday would help us to remember to imitate that saint. I picked "Philip Neri" for no other reason than that May 26th is his feast day. When I joined the Order, we were told we could use a religious name. One of the brothers asked me my confirmation name and suggested that I make it my religious name. With just a little research into Philip Neri's life, I found quite a lot I wanted to imitate!
Though I cringe when my name is shortened to "Fr. Phil," there is one diminutive of the great saint's name I don't mind. . .Philip's closest friends used "Pippo" as a term of endearment for him.  Here's an article by the French Oratorian, Fr. Louis Bouyer that includes a couple of funny stories about the saint.
Philip knew many of the great Dominicans of his day. He was a renowned preacher and confessor. He worked tirelessly among the spiritually defeated youths of Rome. He was a practical joker and an outrageous spiritual director. When he died, an autopsy revealed that his heart had grown too big for this body. An apt description of this saint of Christ's joy! Philip was canonized along with Theresa of Avila and Ignatius of Loyola.
Follow HancAquam ------------>
at 11:47 PM