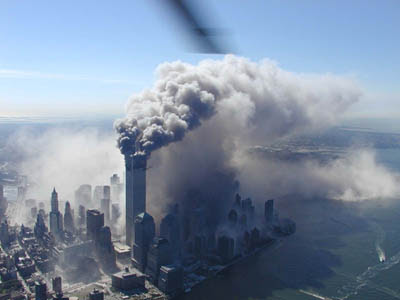 Where were you?
That morning the friars were at breakfast in Jesuit Hall. One of the cafeteria ladies stopped by the table about 8.30 where several of us lingered and mentioned that a plane had crashed into the World Trade Center. One of the brothers said it was probably a tourist plane--prop plane or maybe a helicopter. She said, "No, a big plane. A regular jet plane." I went upstairs to the TV room and was stunned to see the WTC on fire. Before long, several more friars. joined me. As we watched, the second plane hit. And not long after that it was reported that another plane was headed to the Pentagon. We all just sat there in total disbelief. When the Pentagon was hit, we started speculating on what was next. The White House? Congress? I remember feeling that the whole world had just shifted under our feet.

People from the university (SLU) and the area started gathering across the street at St Francis Xavier Church. At noon, a memorial Mass was celebrated for those killed in the attacks.

It was more than a little difficult for me to set aside my anger and pray for the men who did this. Time has not made that task any easier.

The student brothers preached at vespers on Saturdays and Sundays. It was my turn on Sunday the 16th. The readings were uninspiring for me at the time, so I did something I have never done again: I preached on readings of my own choosing, reading aloud from the Book of the Prophet Zephaniah:

A day of wrath is that day a day of anguish and distress, a day of destruction and desolation, a day of darkness and gloom, a day of thick black clouds, a day of trumpet blasts and battle alarm against fortified cities, against battlements on high.

I will hem men in till they walk like the blind, because they have sinned against the LORD; and their blood shall be poured out like dust, and their brains like dung.

Neither their silver nor their gold shall be able to save them on the day of the LORD'S wrath, when in the fire of his jealousy all the earth shall be consumed. For he shall make an end, yes, a sudden end, of all who live on the earth [. . .]

I have destroyed nations, their battlements are laid waste; I have made their streets deserted, with no one passing through; their cities are devastated, with no man dwelling in them.

I said, "Surely now you will fear me, you will accept correction"; she should not fail to see all I have visited upon her. Yet all the more eagerly have they done all their corrupt deeds.

Therefore, wait for me, says the LORD, against the day when I arise as accuser; for it is my decision to gather together the nations, to assemble the kingdoms, in order to pour out upon them my wrath, all my blazing anger; for in the fire of my jealousy shall all the earth be consumed.

Pray for the victims and their families. The heroes of the rescue teams. Those who have died in Iraq and Afghanistan. And the terrorists.