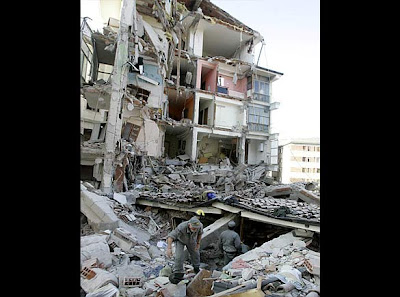 Several people were also reported missing in the area where the quake struck. The quake was felt in much of central Italy, including Rome.

The quake struck about 70 miles (110 kilometers) northeast of Rome at about 3:32 a.m. local time (0132 GMT, 8:32 p.m. EDT), officials said. The Civil Protection Department said the epicenter was near the city of L'Aquila, in the mountainous Abruzzo region.

Massimo Cialente, mayor of L'Aquila, told private Sky TG24 that two people were reported dead in the nearby small town of Fossa. He confirmed reports that another eight were missing in another small town.

The ANSA news agency said the dome of a church in l'Aquila collapsed, while the city's cathedral also suffered damages.

People were woken by the quake and ran into the streets, ANSA said.

The quake was the latest in a series of jolts that struck the area over the past two days.

UPDATE: Video from the BCC

UPDATE 2: Slideshow from the BCC