Every tongue confess that Jesus Christ is Lord!

NB. Preached this one back in 2007. . .it's a little more. . .robust. . .than my later homilies. Also of note: at the request of the CDF, the USCCB investigated Fr. Phan's bizarre theology of religious pluralism and issued a notification to the faithful, warning against the excesses of syncretism. 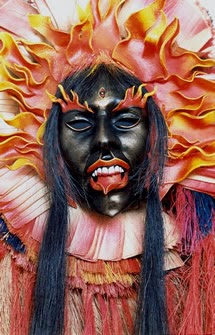 The Exaltation of the Holy Cross
Fr. Philip N. Powell, OP
Church of the Incarnation


Much like the slaves recently freed from servitude in Egypt, “their patience worn out by the journey,” those called to research and teach the faith of the Church frequently give themselves over to complaining against God and “Moses”—those in authority over them. The freed slaves complain about being in the desert—no food, no water, no end to the sand and the long scorching days of wandering. Our more prominent theologians complain about a desert of sorts. They complain about the magisterium’s “version” of the faith, noting that rock-bottom fundamental doctrines, such as the Incarnation, the Resurrection, the Sacrifice of the Cross, the Blessed Trinity, are all excluding, rigid, authoritarian, privileged, and absolutist; and worse, these dogmas of faith of the Roman Catholic faith are white, European, and rational. Since these theologians are mostly slaves to fashion, they wander a desert of fleeting premises, trendy conclusions, and temporary commitments.


These theologians believe one conclusion dogmatically: the shifting sands of culture triumph over the Rock of faith everyday, all day. And so we read paragraphs like this one from Fr. Peter Phan of Georgetown: “[The church would be very different] if the resources of other cultures are marshaled to reconceptualize the whole gamut of the church’s beliefs, liturgy, moral practices, and prayers. What if the God the church worships is depicted as a multi-ethnic, multi-racial, multi-colored, gender-inclusive Deity? What if Jesus is presented as the Buddha, the Guru…?[. . .] What if Mary is seen in parallel with Kwan-Yin, the Buddhist Bodhisattva of compassion? What if the Bible is read and interpreted in the context of other sacred writings such as the Hindu Bhagavad Gita, or the [Buddha-Dharma], or the [Muslim] Qur’an?” (full article)**


Notice: we are to “reconceptualize the whole gamut of the Church’s beliefs, liturgy, moral practices,” etc. based not on any further revelation or a deeper understanding of the revelation we have—fulfilled and finished in Christ Jesus—no, we are to reconceive and alter the whole of our Christian faith based on the demands of alien gods, books of foreign theologies, and practices contrary to the faith. Listen again: You will have no other gods before me! Where is the uniqueness of Christ? Christ isn’t unique! There are hundreds of saviors, hordes of avatars! Where is Christ the final revelation of the Trinity? Christ is not the last word of an on-going, unfolding revelation! There are millions of unwritten bibles out there. Where is the exclusive claim that God the Father has on our allegiance as His children? Exclusive claims! We are inclusive, open, free…all the gods claim us! Are there differences in how various cultures live out their Christian faith? Of course there are! But the faith comes first. Culture is shaped by faith. Sand blows around the Rock. The Rock doesn’t shift and slide every time the wind blows!


Alright, enough of that. Why am I beating these theologians, er, I mean, dead horses? Today we celebrate the exaltation of the Holy Cross. The Triumph of the Holy Cross over sin and death. Oddly enough, we must be reminded on occasion that we owe our eternal lives to the single sacrifice of Christ on the Cross. He emptied himself. Son of God, emptied himself. Became a slave like us, for us. He humbled himself and made himself obedient to death. Even to death on a Cross—ignoble, criminal, unclean, despicable; he was executed. And because Christ did all of this freely—yes, with some anxiety, with some sense of having been betrayed…again—but because he commended his spirit to his Father for our sakes, “God greatly exalted him and bestowed on him the name that is above every name…and every tongue shall confess that Jesus Christ is Lord.”

Open your eyes to see, open your ears to hear: God loved His creation so much that He sacrificed His only Son, Jesus, on the cross. He did this so that everyone who believes in Christ might not die but have eternal life with Him. God did not send His only Son into the world to condemn the world, but to save us all through His Son, Christ Jesus. The final triumph of the Cross will never be the serene Buddha nailed to the wood of the cross or the gruesome Kali Destroyer sitting on the cathedral altar waiting for blood or a “gospel reading” from the elegant Koran. Never. The Son of Man, the Son of God “must be lifted up so that everyone who believes in him may have eternal life.” Jesus Christ—final, unique, singular, the one and only name given under heaven and on earth for our salvation.

With apologies to our impatient theologians who complain against God and Moses: to dispel any confusion, let’s hear it one more time: “God greatly exalted Christ and bestowed on Christ the name that is above every name, that at the name of Jesus every knee should bend…and every tongue confess that Jesus Christ is Lord…”