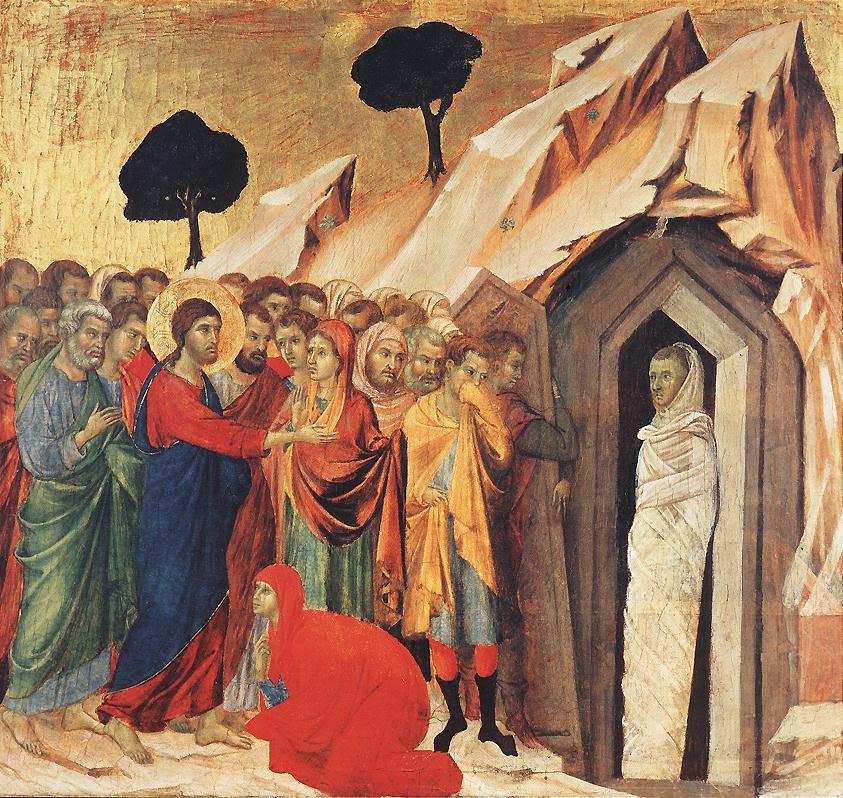 
Our Lady of the Rosary, NOLA


Jesus is perturbed. Very upset. The Greek word here – embrimaomai – means something like “angry within himself.” John uses this word twice in the reading. Once when Mary falls at his feet weeping. And again after the Jews wonder aloud why he couldn't save Lazarus' life – he healed the blind man after all! Why is Jesus angry? What's more, why start a homily on the last Sunday of Lent by pointing out Jesus' anger? The Sunday readings of Lent build to this Sunday. Jesus is tempted in the desert for 40 days. He is transfigured on Mt. Tabor. He meets the Samaritan woman at Jacob's well. Then he heals the Man Born Blind. With our readings this morning, we see a theme: Jesus' humanity – his consistent, undeniable humanity. And the interaction between his humanity and the physical world he inhabits. As we rapidly approach the solemn celebration of his resurrection from the dead, the gospel writers want to point us back again and again to Christ's human nature, back to his body and bones and blood. Lest we forget that Christ's resurrection was a physical, historical event, we are reminded – by his anger – that is he one of us, like us in all ways but sin. And like him, we too will be resurrected.

As strange as it is to think of Jesus as an angry man, it is even stranger to think that he allowed Lazarus to die in order to raise him to live again. But it appears that this is exactly what happened. John reports that Jesus waits for two days after hearing about Lazarus' deadly illness before he leaves for Bethany. Two day delay plus two days of travel and our Lord arrives four days after his friend has died. When Jesus arrives, Martha says to him, “Lord, if you had been here, my brother would not have died.” Her words may sound accusatory, so she quickly adds, “But even now I know that whatever you ask of God, God will give you.” Imagine Martha's emotional state. Mourning her brother's death. Upset with Jesus for not arriving sooner. Relieved that he is there. And trusting that he will be able to do something miraculous. Riding this roller-coaster of pain and barely suppressed joy, Martha believes. And Jesus chooses this moment to reveal a mystery. To the grieving sister he says, “Your brother will rise.” This is why our Lord waited to attend Lazarus: to uncover the mystery of faith, to reveal an eternal effect of believing that he is the Christ – new life out of death.

Jesus even spells it out: “I am the resurrection and the life; whoever believes in me, even if he dies, will live, and everyone who lives and believes in me will never die.” Then he turns to Martha and asks the fundamental question of faith, “Do you believe this?” Martha's answer is exemplary. Is ours? I mean, do you believe that Jesus Christ is the resurrection and life? Do you believe in him? Do you believe that by believing in him you will rise again to new life? And let's not piddle with spiritualized metaphors or psychological interpretations here. Jesus means exactly what he says. Do you believe that you – body and soul – will be given an eternal life after you physically die? The whole point of waiting for Lazarus' death is to reveal the mystery of life after death. The whole point of showing Jesus at the tomb with a four-day old corpse is to reveal the mystery of life after death. Martha warns Jesus when he orders the tomb opened, “Lord, by now there will be a stench; he has been dead for four days.” Spiritualized or psychologized metaphors do not emit a stench, much less a stench that deserves a warning! We're talking about a corpse. A dead human body. No embalming. No refrigeration. Martha's warning about the smell is not just a courtesy to Jesus. She deadly serious.

And so is Jesus when he answers her warning, “Did I not tell you that if you believe you will see the glory of God?” He did tell her that. Martha believes. So, she sees the glory of God. Lazarus walks out of the tomb when Jesus calls his name. Lazarus risen from a four-day old death is the glory of God that Jesus promises. That's the same promise he makes to us: believe and be raised. And not just on the last day either. But raised again and again from the little deaths that sin inflicts on us daily. Yes, there will be one, final resurrection – some into eternal life and some into an eternal death – but there is also an ongoing, daily resurrection that we experience along the way to perfection. As our joy is being completed along the Way, we experience everything that Martha and Mary experience after Lazarus' dies – joy, anger, disappointment, wonder, grief. And with Christ among us we experience each one of these passions as a whole human person, a complete creation made complete by Christ's miraculous resurrection from his tomb. But our perfection in him must wait until the last day and our job 'til then is to do as Martha does – to believe that Christ, the Son of God, “the one who is coming into the world.”

Our Sunday readings in the season of Lent draw us toward Lazarus' emergence from his tomb in order to prepare us for Christ's resurrection on Easter morning. Each Sunday reading pounds on the theme of Christ's humanity so that the glory of his miraculous resurrection doesn't outshine the truth that he is one of us in all but sin. He cries. He bleeds. He feels and expresses anger. He mourns and believes. And he loves. Just like we do. And if we place our trust in him, believing in his Lordship and acting on that belief in our lives, we will rise as he rose. With just one week of Lent left before we begin the Easter season, let this be the question you ask yourself all day everyday: do I believe? Do I believe that Jesus Christ is the Son of God, risen – body and soul – from the dead on the third day? If you say yes to this question, our Lord will say, “Untie him, untie her and let them go.”