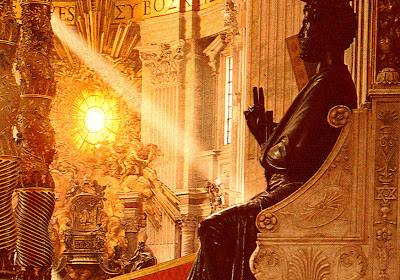 
In just six days, Feb. 28th, the Chair of St. Peter will be empty, sede vacantes. Our Holy Father, Pope Benedict XVI, will become bishop emeritus of Rome, and he will fly off to Castel Gandolfo to live while his rooms in the Mater Ecclesiae Monastery are being renovated. Until the Conclave is assembled and a new pope is elected, the Chair of Peter will remain empty. There will be no Vicar of Christ on earth, no Servant of the Servants of God to serve as Peter among us. Lest we feel spiritually orphaned, we must remember that though his Chair will be empty for a time, Peter's office remains. The Rock upon which Christ established his Church remains, anchoring God's people in the 21st century to the unchanging apostolic witness of Peter. Jesus asks his disciples, “Who do you say that I am?” Simon Peter responds, “You are the Christ, the Son of the living God.” And Jesus declares, “. . .you are Peter, and upon this rock I will build my Church. . .” Both the man, Peter, and his profession of faith in Jesus stand under the Church as our rock. “And the gates of the netherworld shall not prevail against it.”

Like most every other Catholic in the world, I was at once surprised and distressed by Pope Benedict's renunciation of the Petrine office. Why is he resigning? Is he ill? Who will take up this ministry after him? What does it say about the Chair of Peter that a pope would renounce his ministry? I also began to fret about how this news would be spun in our anti-Catholic media. Every lie, every rumor, every scandal would be trotted out and commented upon with the same fulminating bile and willful ignorance that the Church has been subjected to in the last 40 yrs. by our media betters. And just as all this anxiety and catastrophizing was slowly boiling into some serious fear, I remembered something, something perfectly simple and instantly calming: this is Christ's Church. We belong to Christ. Benedict and the next pope—whoever he will be—serve the Church. And the Church serves the mission of Christ. “And the gates of the netherworld shall not prevail against it.” If the denizens of hell cannot defeat the Church, then the potentially precedent-setting resignation of Benedict XVI; nor a less-than-ideal papal successor; nor a bigoted, ignorant media is going to cause much of a dent in the faith of God's people and our determination to preach the Good News of Jesus Christ.

Our Lord asks his disciples, “Who do you say that I am?” And Simon Peter answered for the group, “You are the Christ, the Son of the living God.” At that moment, the Rock of Christ's Church was set into the bones of the world, and we have been building the house of God ever since. No matter which of the Church's bishops walks out onto that balcony overlooking St. Peter's Square in a month's time; no matter what name he chooses, or where he was born, or how smart or good-looking or athletic or pastoral or fat or old he is, he will be Peter the Rock. That is the guarantee of steadfastness in faith that Christ has given to us. And no matter who sits in Peter's Chair, our baptismal mission doesn't change. We are vowed by the death and resurrection of Christ through the holy water of baptism to preach and teach and live the Good News of God's mercy to sinners. Let nothing and no one shake your foundation in the Church. Let nothing and no one rattle your determination to love as Christ commanded; to grow in holiness through grace; and to use your gifts for the good of the least among us. Upon this rock Christ has built his Church and not even the gates of Hell can touch her.
______________