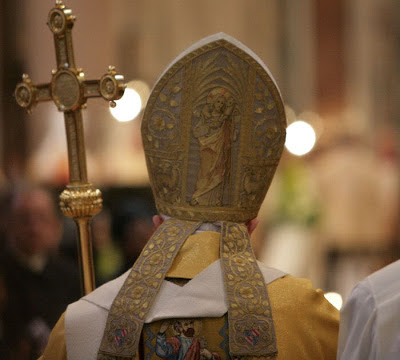 
Is there any endeavor more damning of our species' basest instincts for deception, selfishness, and pride than the pursuit of political office? Yes, there is. The pursuit of ecclesiastical office. This is not to say that every secular politician and sacred office holder is a lying, selfish, blowhard. Many who serve us in civil gov't and in the Church do so out of a deeply held sense of duty to the common good and perform their duties honestly, selflessly, and with all humility. Look no further than Pope Benedict XVI for an example of ecclesial leadership rooted in sacrificial service to the Gospel and God's people. For an example of how ecclesial leadership can go wrong, look no further than the sons of Mama Zebedee, James and John. When put upon to elevate these two to high office in his kingdom, Jesus says, “You do not know what you are asking. Can you drink the chalice that I am going to drink?” With no idea what this question means; no clue about the implications of what it means to be a leader in the Church, Mama Zebedee's precious boys say, “We can.” Deceitfulness, selfishness, and pride will help you obtain power in the world and the Church. But power alone never makes a leader.

You have heard it said that leadership is the art of finding a parade and then marching in front of it. Mama Zebedee and her boys look at Jesus and the other disciples, and they see a parade. Her petition to Jesus to give her sons places of honor in his kingdom is her attempt to get in front of the Ecclesial Parade. James and John inadvertently expose their unworthiness for high office by readily accepting the idea that they can “drink the chalice” that Jesus himself must drink. Do these two understand that “drinking the chalice” is Jesus' way of saying “dying a gruesome death for the good of all”? I doubt it. And even if they do understand what it means, Jesus makes it clear that the honors they seek are not his to give. He also makes it clear that there is no reward for servant-sacrifice. To serve is its own reward; therefore, Christian leadership flows from no other source than a willingness to give one's life as a ransom for many. In other words, a Christian leader will be Christ for his/her family, friends, parish, and nation: “. . .whoever wishes to be great among you shall be your servant; whoever wishes to be first among you shall be your slave.” Just as Christ himself was for us.

Even if you live under a cypress tree out in the bayou, you cannot escape the media coverage of the upcoming papal conclave. Cast as a secular political drama with “frontrunners,” “dark horse candidates,” and the nauseating chorus of chattering-heads speculating on which millennial-old truths the next pope should change, the conclave is a rare chance for Catholics to watch our leaders carefully. While the magpies on CNN squawk about the shape, size, color, nationality, and ideological preferences of the men who could be pope, Catholics should ask themselves one question about each cardinal: can he, will he drink the chalice that Jesus drank. . .that is, will he serve the Church in truth through sacrifice? Not his ambition, his ideology, his fellow countrymen, or his Vatican buddies. Anyone who dares to lead the Church must be eager to risk being nailed to the Cross, and not just a metaphorical cross but a real cross. . .even if that cross looks like a bullet or a prison cell or a suicide bomber. The Chair of Peter comes with great power. But power alone never makes a leader, especially a leader of Christ's people. “The Son of Man did not come to be served but to serve and to give his life as a ransom for many.”
_____________