As many as touched the tassels 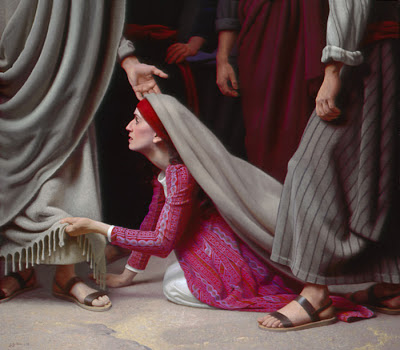 
How many did Jesus heal that day by the sea? “. . .as many as touched [the tassel of his cloak] were healed.” Was that three or thirty or three thousand? We don't know; we can't know. It's really not important—the precise number. What's important is that as many as approached Jesus were healed. One or a million and one were restored to health. They touched the tassel of his cloak and found themselves renewed. No doubt they were thrilled to be healthy again, or maybe for the first time in their lives. We can imagine their gratitude, their joy. But how did they understand their newly restored health? Not just “what did they feel?” but what did they think had happened to them? When you are healed—by God, by medicine—what do you think has happened to you? Do you think that you are healthy again b/c your body has been repaired? Or do you think in terms of the spiritual health of your whole person? Body and soul. We don't know how many were healed that day, but as many as Jesus healed thought about their righteousness. How do we know? They reached for the tassels of his cloak, the sign of Christ's faithfulness to the Father.

In the Book of Numbers, we read Moses' instructions to God's people, “Speak to the Israelites and tell them that throughout their generations they are to make tassels for the corners of their garments. . .” Now, this isn't just a fashion statement. Moses has a particular use in mind for these tassels: “When you use these tassels, the sight of the cord will remind you of all the commandments of the Lord and you will do them, without prostituting yourself going after the desires of your hearts and your eyes.”* As visible signs of the Law, the tassels serve to keep God's people ever mindful of the covenant, ever mindful of the obligations and promises made btw God and Abraham. That covenant establishes the basis for a multi-generational relationship that directs divine favor to Israel, guaranteeing prosperity to Abraham and his descendents as long as the covenant is honored. Jesus wears the tassels—he's a rabbi, after all—to honor the covenant, to show his obedience to his Father's Word. As many as he healed that day were healed by their faith in the Word; for them, the Word made flesh, walking among them.

As I was writing this homily, Fr. Marty knocked on my door to tell me that CNN was reporting that Pope Benedict XVI has announced that he will resign at the end of this month. Citing his failing health and the demands of the papal office, he feels that the Church needs a younger, more energetic man to sit in the Chair of Peter. Papal resignations are not unprecedented, there have been several in 2,000 yrs. However, BXVI is the first pope to resign in 600 yrs, the most recent being Pope Gregory XII who resigned in 1415 to end the Western Schism. If you feel yourself growing anxious at this news, you are not alone. Every faithful Catholic in the world is a little bit jittery right now. Changes in the Church—especially with the papal office—always come with some degree of worry. Just remember: the pope—whoever he happens to be next month—guides the Church with the help of the Holy Spirit. Our trust, our faith, and our hope rests with Christ, the eternal High Priest. He wore the Mosaic tassels to show his fidelity to the Father's covenant with Israel. He healed as many as touched those tassels. How much more are we renewed and restored by touching his body and blood?