The Magi and Our Bishops 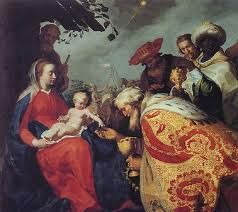 This is the deacons' weekend to preach, so I thought a little taste of BXVI's homily for Epiphany Sunday would be good.  During this Mass in Rome, the Holy Father ordained four men bishops, thus the focus on the nature and character of the episcopate:

Let us return to the Wise Men from the East. These were also, and above all, men of courage, the courage and humility born of faith. Courage was needed to grasp the meaning of the star as a sign to set out, to go forth – towards the unknown, the uncertain, on paths filled with hidden dangers. We can imagine that their decision was met with derision: the scorn of those realists who could only mock the reveries of such men. Anyone who took off on the basis of such uncertain promises, risking everything, could only appear ridiculous. But for these men, inwardly seized by God, the way which he pointed out was more important than what other people thought. For them, seeking the truth meant more than the taunts of the world, so apparently clever.

How can we not think, in this context, of the task of a Bishop in our own time? The humility of faith, of sharing the faith of the Church of every age, will constantly be in conflict with the prevailing wisdom of those who cling to what seems certain. Anyone who lives and proclaims the faith of the Church is on many points out of step with the prevalent way of thinking, even in our own day. Today’s regnant agnosticism has its own dogmas and is extremely intolerant regarding anything that would question it and the criteria it employs. Therefore the courage to contradict the prevailing mindset is particularly urgent for a Bishop today. He must be courageous. And this courage or forcefulness does not consist in striking out or in acting aggressively, but rather in allowing oneself to be struck and to be steadfast before the principles of the prevalent way of thinking. The courage to stand firm in the truth is unavoidably demanded of those whom the Lord sends like sheep among wolves. "Those who fear the Lord will not be timid", says the Book of Sirach (34:16). The fear of God frees us from the fear of men. It liberates.
[. . .]
______________