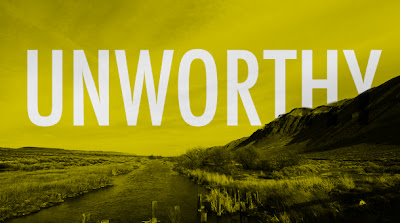 
Despite their voracious appetite for military conquest, the Romans of Jesus' day were known for their lenient policy toward the religious practices of their conquered peoples. Most of the time, subject nations and tribes would be required to incorporate the Emperor into their local pantheon of deities. For the polytheistic pagan cultures brought into the empire, this was not a deal-breaker. They tossed a pinch of incense on the imperial altar and got on with their lives. The Jews, however, were different. As the only truly monotheistic religion under Roman rule, God's people were exempted from the imperial cult. Thus, when the centurion requests Jesus' help with a sick servant, he is showing respect for the religious prohibition against Gentiles visiting Jewish homes, “Lord, I am not worthy to have you enter under my roof; only say the word and my servant will be healed.” What do we mean when we repeat the centurion's words before receiving the Body and Blood of Christ in communion? Isn't all this business about being “unworthy” a bunch of junk leftover from the pre-Vatican Two Church?

This very question was asked in one of the classes I took in seminary. A woman in the class objected rather vigorously to the phrase, “Lord, I am not worthy to receive you. . .,” arguing that requiring Catholics to repeat this at communion time fostered a “pre-Vatican Two mentality” regarding the human person and served to damage personal self-esteem. She proudly declared that she always changed the phrase to “Lord, I AM worthy to receive you. . .” Being something of a pot-stirrer, I asked, “If you are already worthy to receive communion, why bother receiving?” That earned me a damning glare from both the woman and our professor! I attempted to explain what I thought was the ancient understanding of human worthiness before God, but my explanation was drowned in a storm of indignant accusation of “patriarchal throwback” and “no pastoral sensitivity.” Since then, I've been a little more careful about distinguishing btw “being worthy” and “being made worthy.” Before the majesty of God and His Christ in the sacrament, no human person is worthy by nature; however, b/c of Christ and his sacrifice for us, we are made worthy to stand in the divine presence. To ask for healing while in His presence—imitating the centurion—is a confession of our place before Him: we are servants.

If confessing our status as servants seems like another bit of “pre-Vatican Two” leftovers, let's remember that we follow Christ, the one who takes himself off the Master's pedestal and serves his students by washing their feet. The same Christ who exhorts his disciples to be servants to the least among his brothers and sisters, and then places first those who place themselves last. Confessing our lack of worthiness to receive Christ in communion and then receiving him in communion is the supreme act of trust for a Christian servant. The centurion confesses his own absolute trust in Christ's power when he says, “. . .only say the word and my servant will be healed.” No need to come to my house, Lord. No need to see or touch my servant. Just say the word. We echo his trust when we repeat his confession; when we repeat his confession, we too confess our trust that though unworthy we are made worthy. If such a confession of faith damages self-esteem, let me suggest that the truth of Christian humility is being deeply misunderstood. Nothing we can do will ever lift us up to worthiness. We are dust and wind. However, as a gift, we are dust and wind loved by Love Himself and made instruments of His mercy for His greater glory. Lord, only say the word and our souls are healed. Only say the word and we worthy to do your will.
_____________