It's the End of the World! 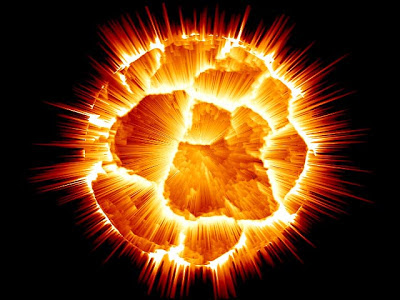 
There are many and various ways to be awakened from a deep sleep. A honking alarm clock. A hungry baby. A ringing phone. A knock at the door. Theses are the usual ways. If you are interested in learning about the more unusual ways we can be awakened, search Youtube for “wake up pranks.” Pranksters use air horns; plastic spiders, snakes, and lizards; flour and syrup; mousetraps and marbles; fireworks, and even Halloween masks to scare the living daylights out of their family members and friends. Asleep and soundly dreaming away, the victims are secure in their beds. Vulnerable, innocent, easy prey. When the assault comes, their reactions—screams of terror, wild jumping about, colorful language—all come together perfectly in a flashing instant of terrifying surprise, a completely unexpected jolt back to the reality of the waking world. . .and the eye-watering laughter of their loved ones. After this dose of terror, how do they ever get back to sleep, waiting, as they surely are, for the next bucket of iced water, or the next fake machine gun blast? They know it's coming. Do they just wait to be surprised again?

Speaking to the disciples about his return at the end of this age, Jesus says, “Beware that your hearts do not become drowsy. . .and that day catch you by surprise like a trap. For that day will assault everyone who lives on the face of the earth. Be vigilant at all times. . .” Like the victim of a Youtube wake-up prank, are we to live our lives in vigilant fear of being surprised by the trumpet blast, the roaring waves, the moon and stars shaken from the sky? After all, doesn't Jesus also tell the disciples that “people will die of fright in anticipation of what is coming upon the world”? Ours is a vigilance of hope not fear; of thankful anticipation not fret and worry about disaster and cosmic destruction. Yes, the Day is coming, but it is the Day our Lord fulfills His final promise to us.

Pay attention: “The days are coming, says the Lord, when I will fulfill my promise…” Over the horizon, yet to arrive, are those days ahead of us when the Lord will make good on His promises to bring us back to Him; to rescue us from darkness and make us into children of the Light. He sent His prophets and His Law. We killed the former and violated the latter. And grew no holier for our trouble. And the Lord grew no more patient. He promised Abraham children as crowded as the stars, and He promised those children that He would never abandon them, never exile them, never punish them, never again start from scratch, hoping to replace them. Instead, He promised them a King and a Savior, a Lamb and a High Priest. He promised them a Son of Man and a Son of God, a single rescuer for all creation. One for us who is like us and who will make us like him, one with him, one like him, a single heart and mind, a single path, one goal, one road, two feet, and a promise from the mouth of God Himself: the days are coming when I will fulfill the promise I made. And this world will be ended.

Of course, the world has been ending since it started. The Last Day of creation set with the First Day's sunrise. Can you count the number of world-ending scenarios you have lived through? For me: Soviet communism, DDT poisoning, acid rain, nuclear winter, HIV/AIDS, the new ice age, global suffocation from deforestation, flu pandemics, “dirty bomb terrorism,” worldwide economic collapse, and global warming—all secular apocalyptic scripts that narrate the reduction of our civilizations to utter ruin. Instinctively, it seems, we understand that as individuals and as a collective whole we will die. There will be an end. I will die. You will die. We might even die together. On a global scale, apocalyptic scenarios represent our individual anxieties about dying. Projected on the world-screen, these End of Days dramas are just one of the ways we humans play out our fear of dying. The trumpets of natural disaster, or nuclear annihilation, or environmental pollution blare from the four corners of the Earth, and we run around screaming, searching for some way—any way—to forestall our end. If the Church can be justly accused of using the bloody prophecies of Armageddon to frighten the vulnerable into submission to her influence, then we can just as rightly accuse the secular powers of using scientific prophecy to scare us into a slavery to fear. Does it matter if the prophets of global destruction are dressed in vestments or lab coats? Whether they use cryptic scriptures or equally cryptic “science”? Neither of these schools of prophecy preach the hope that Christ came give to us. Neither encourages us to wait faithfully in the expectation of the day of promise. Neither points us to the need to live in love with thanksgiving.

Does the inevitability of The End mean then that we can become complacent in our vigilance for the coming of the Lord? No, of course not. But if we are not to drown in worry and be surprised on the day of promise, we must understand that ours is a vigilance for the coming of Christ not a vigilance against our inevitable demise. As Christians, we have no fear of death. Death is dead. Yes, we will die. But we will not lie dead forever. Jesus is not warning the disciples against the coming end so much as he is telling them to live now as if he had come again already. When secular apocalyptic scenarios splash across the media, we are told that there are solutions, ways of avoiding the coming disasters. We are harangued and shamed into accepting power-grabbing schemes to save the planet. Jesus says no such thing to the disciples. There are no solutions. He says simply, “I will return. And here is how you will know I am coming. . .” The advent of his coming is always upon us. He has come; his is coming; and he will come again. These are not reasons to fear an end, but reasons to hope for Christ's inevitable rule.

Paul writes to the Thessolonians: “May the Lord make you increase and abound in love for one another and for all…” Here’s what’s scary about Advent: yes, the Lord is working to fulfill His promises, but the promise He made is the promise of change, of purification; He promises to love us regardless, and we are radically transformed by Love dwelling among us. The advent of transforming Love is frightening. We will not be the same. Ever. And if we will come to Christ as children ready to be transformed, we will strengthen our hearts against the seductions of the culture of death; the opinions of the herd; the temptations of material excess, and spiritual impoverishment. Movies, news media, celebrities; all our things, and empty spiritual junk food will seduce us, reel us in and leave us disheveled, broke, embarrassed, and dirty. Beware that your hearts do not become drowsy! Or the day of the Lord will surprise you like a trap. . .or an air horn, or a bucket of ice water in the middle of the night.

Christian hope looks beyond anxiety, beyond disaster, beyond the always-already advent of an apocalypse. When we hope as we ought, we are not gambling against cosmic odds, but rather laying claim to the promise made by God to His prophet Jeremiah: “In those days, in that time, I will raise up for David a just shoot; he shall do what is right and just in the land.” That's not an angry threat but a divine guarantee. How then do we prepare for the coming of the Lord? Ask yourself as you begin and complete every daily task: how will starting and finishing this job get me closer to God? How does cooking dinner, reading, driving, paying the bills get me closer to God? Be vigilant against joylessness; stand guard against vanity and pride; beware deception, easy compromise, weakened trust, injustice; and beware court prophets and preachers prophesying and preaching what you want to hear. Be vigilant at all times and pray that you have the strength to endure until the coming of the Lord. And when he does: stand up and raise your head because your redemption is at hand!
______________