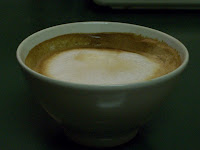 Words matter. . .but they matter more to some than to others:  B.O.'s P.C. assault on how we talk about terrorism.
What are the paradoxes inherent in the creative mind?  Most of these apply to the preacher, I think.  How does a preacher of an ancient message bring that message to a contemporary world without sacrificing its substance?
Immigrants reduce violent crime in urban areas?  This study says yes.  NB.  the study doesn't distinguish between legal and illegal immigration nor does it factor in the use of mandatory sentencing laws as a deterrent to crime.  Read the comments for other flaws in the study.
The dangers of Multiculturalism in a multicultural society.  When it comes to the Dogma of Immaculate Multiculturalism, leftists consistently confuse "descriptive multiculturalism" with "prescriptive multiculturalism;" in other words, there is a difference between saying, "Wow.  We have a lot of different cultures in the US" and "The difference ethnic cultures in the US must be allowed to dominate American culture."
Damien Thompson reports that the Holy Father will not be tortured by trendy, folksy music during his visit to the U.K.
Female "priest" denied a Catholic burial.  This column is so full of factual errors that it's hard to fisk it.  NB.  the Vatican did NOT excommunicate this woman.  By pretending to be ordained a Catholic priest, she excommunicated herself.  By denying her a Catholic burial, the archdiocese was simply honoring her wishes not to be included in the life of the Church.
America Magazine quietly edits the on-line anti-Benedict rant of one of its Jebbie columnists.  Maybe they got a call from The Inquisition?
If you have ever watched an episode of The Shield, you know how important it is to have a gangster name.  So, here's the Gangster Name Generator.  Mine is "Fredo 'Louie Ha-Ha' Giordano."
Follow HancAquam ------------>
at 10:57 PM