Can a King rule from a Cross? 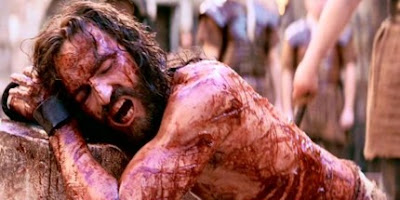 
Christ the King (C): 2 Sam 5.1-3; 1.12-20; and Luke 23.35-43
Fr. Philip Neri Powell, OP
and Church of the IncarnationThis time next year the will have a new president. For some, this will be a glorious moment in history. For others, it will be a source of near-crippling anxiety. The build-up to that moment is already under way and again for some this is a drama worthy of Shakespeare, for others it’s a comedy, a farce. . .worthy of, well, also worthy of the Bard himself. Regardless of what you think of the process and all of its possible outcomes, we are plopped down in front of a question that has occupied the best and worst human minds since the first two cavemen got together to hunt for supper: who leads? Who decides? Who will rise to the top and show the way? And why should anyone follow the one who walks out in front? Do we follow strength? Courage? Expediency? Vision? Self-interests? Charisma? Do we follow prejudice? Tribal custom? Mythical spirit? Patriotic zeal? Do we elect our leaders? Select them? Let God (or the gods) send them to us? Do they inherit leadership? Or take it by force? By wealth? By charm? Add to these the anxieties we feel as Christians. Will our virtues be respected? Our rights as citizens be honored and protected? Will we be forced to participate in intrinsically evil acts or tolerate policies and actions that violate our most basic teachings? What does it mean for us, we Christians, to be leaders in the Church, in the world? Though not an explicitly political solemnity, this Solemnity of Christ the King raises worrisome questions for us precisely because it answers infallibly the question of who it is that ought to rule our hearts: Christ Jesus, King and servant. Who is Christ as King? Who is he as servant? And what do these two titles tell us about how we are to be leaders in the Church and in the world?

We have two starkly opposed images of Christ the King: first born of all creation, head of the body, the Church AND the suffering servant, a ridiculed criminal nailed to a Roman cross. Savior and rebel. Messiah and rabble-rouser. Only Son of God and only a son of Joseph and Mary. He is the image of the invisible God and a convicted insurgent. He is the beginning, preeminent in all things and he is “King of the Jews,” sneered at and executed by the state. We know from Paul that the Son of God “took on the form of a slave, to be human like one of us,” and we know that he reigns in heaven at the right hand of the Father. The political question for us Christians, the leadership question for us is: How does a king rule while nailed to a cross?

Jesus hangs on the cross, nailed hands and feet to the wood. Pilate has placed a sign above Jesus’ head. It reads, “This is the King of the Jews.” The Roman soldiers, reading the sign, shout up at him, mocking him, “Hey, if you are King of the Jews, save yourself.” Without waiting for an answer, the soldiers give him vinegar to drink. More mocking, more scorn. For a Roman there is nothing more ignoble, more inhuman than to die a rebel, executed on a cross. It is the punishment reserved for lowest of the low. Their mocking of Christ is not only morally acceptable; it is required. It is part of the punishment. Stripping Jesus of his human dignity, stripping him of his identity, his vocation is just part of the price they make him pay for allegedly defying Roman rule. Nothing about Jesus’ teaching rises to the nobility and art of Roman philosophy. Nothing he did—heal the sick, forgive the sinner, feed the hungry—nothing about his ministry strikes the Romans as particularly religious or moral. Why save the weak from disease? Why rescue the poor from their fate? Why look with favor on slaves, foreigners, atheists, and cowards? Honor the gods, your family and ancestors, your country, and show no mercy to your enemies. The soldiers’ taunt—“Save yourself if you are King!”—is a spiteful but nonetheless predictable display of Roman disdain for weakness.

Given all of this, how does Christ rule from his cross? One thief, hanging next to our Lord on a cross of his own, says to Jesus, reviling him, “Are you not the Christ? Save yourself and us.” The other thief, hanging on his cross on the other side, says, “Have you no fear of God. . .we are guilty of our crimes and we have received a just punishment but this man has done nothing criminal.” This thief admits his guilt and asks Christ for mercy. He receives it. Jesus says to him, “Amen, I say to you, today you will be with me in .” And this is how the suffering servant, the slave of God’s slaves, the broken king on a cross, this is how he rules from his crossed-wooden throne: he shows compassion to those left without hope. And, if you will follow him to his Good Friday tomb, rise again with him on Easter morning, and live forever in his presence on the Last Day, you will do the same. Otherwise, your baptismal vow “to follow Christ” means nothing at all.

Let’s ask our question one more time: how does a king rule while nailed to a cross? The weakest answer we could muster is: he rules by example. So did the Romans. We could say that he rules by moral force. Well, so did the Romans. They ruled by what they thought of as a moral order, an imperial imperative to bring the Pax Romana to the world. We could answer: he rules by invoking in us a kind of patriotic fervor for the Church. How dare the Romans and the Jews kill Christ! They must pay for their blasphemy! Is hatred and revenge our destiny as Christians? If not by example or moral imperative or an incitement of righteous vengeance, how then does Christ the King rule while nailed to a cross? How does he rule even now? We cannot forget that our suffering servant, our broken and bleeding Jesus is the one who delivered us from the power of darkness; gave us to his Father’s kingdom as sons and daughters, heirs to the wealth of eternity; in him we have our redemption, the forgiveness of our sins. He is more than merciful; he is Mercy. He is more than loving, he is Love.

Paul reminds us and we cannot forget: “…in him were created all things in heaven and on earth, the visible and the invisible…all things were created through him and for him. He is before all things, and in him all things hold together.” Christ the Crucified rules from his cross because in him “all the fullness was pleased to dwell, and through him to reconcile all things for him…” Christ for us is everything. There can for us be no appeal to economic efficiency, political expediency, popular demand, or incremental progress. Christ rules by transforming cold hearts, by turning hard heads, by overthrowing obstinate wills; he rules in virtue, in strength, by being for us weak in condemnation and mighty in compassion. And we, as his body, his members can be nothing less, nothing weaker. We are subjects of a Crucified King.

Here we are, Lord, your bone and your flesh. Make of us mighty slaves, strong servants; make of us virtuous rebels, holy insurgents. Make of us a compassionate nation, a merciful tribe; make us a sacred people, a church bought by the blood of the cross and given away, freely given as a gift to the world.