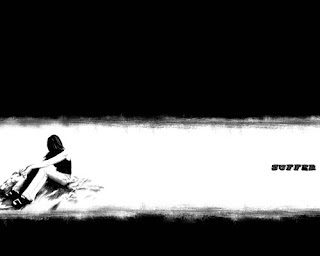 Recently, I conducted a one-day retreat for the local lay Dominican chapter. I was asked to give three talks on the theme, “Preaching Truth in a Lying Age.” During one of the talks I mentioned the notion of suffering and gave a very brief ferverino on what suffering means for Christians. That little piece of the much bigger retreat is still sitting with me this morning.

When I am asked to recount my vocation story, I often tell the story of how I came to a better understanding of humility. In 1998, I had injured my back at work. For about two months my doctor thought I had merely sprained a lower back muscle and he treated me as such—mild muscle relaxers, milder pain meds, and physical therapy. I was in excruciating pain, often fainting and completely unable to bathe or walk. Only after I had lost about 50lbs. and nearly lapsed into a coma with a 106 degree temperature did he finally decide to send me for an MRI.

After the MRI and during one of my physical therapy sessions I was called to the phone to hear my doctor’s nurse order me to cease therapy immediately and return to the office. Her voice was insistent and slightly frightened. Obviously, I was terrified. They had found something. Once in the office, the doctor informed me that I had a large mass growing between my two lower vertebrae. He showed me the MRI films and ordered me back to the clinic for another MRI. This time they shot me full of contrast fluid. The mass shone like a mountain. My doctor, nearly in tears because he had ignored my pleas for better pain meds, told me that he was pretty sure I had cancer. Only a biopsy could confirm this.

The biopsy indicated that the mass was a staph abscess. They rushed me to the hospital where I was told that my heart had likely been severely weakened by the infection. Tests showed that this was not the case. However, the staph had infected my blood, sending my sed rate to deadly levels. My infectious disease doc confided to me that he couldn’t explain that why after almost three months of an internal staph infection I wasn’t dead. He ordered a PIC line inserted into my heart and I was fed two IV anti-biotics for seven weeks. During those seven weeks I was at home with my parents recovering.

I was unable to keep food down. Couldn’t bathe or sleep. And I was dependent on my parents for everything. I was 35 years old and once again a child. The day humility came to smack me around I had a doctor’s appointment. Since I could barely walk, my mom had to dress me. The absurdity of my situation hit me hard when it came time to put on my socks. Sitting on a low bench in my underwear with my mom kneeling in front of me, struggling through a stream of tears to get my socks on for me, I started crying in frustration, anger, gratitude, and a sense of helplessness. It was all so absurd, so surreal, and yet also weirdly peaceful.

My point? I had been in constant pain for almost four months, and I grieved my loss of independence. But I had yet to suffer. Pain is not suffering. Grief is not suffering. Since I was merely experiencing pain and not giving that pain purpose, I had refused to suffer. There was no grace for me in simply being in pain. Once I decided to allow the pain to have a purpose (i.e., “to suffer the pain”) as a gift of humility, my recovery quickened, and I was able to go back to work in month or so. Now, when my oh-so-ready pride pokes its head into my business, I remember the scene of my mom struggling to get my socks on without hurting me—the two of us crying like babies at the absurdity of the whole thing.