It's "actual" NOT "active" participation 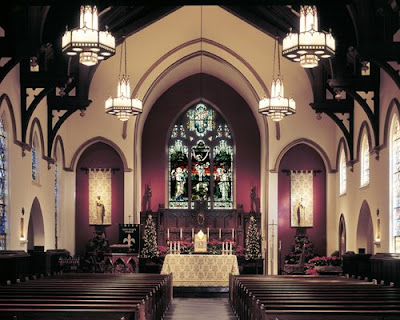 Fr. Jay Scott Newman, pastor of St. Mary’s Catholic Church in , Nails It! Every candidate for ordination for the next 75 years ought to be required to recite this article verbatim at his ordination to the priesthood BEFORE the bishop touches his head. Check out the parish’s website and give God thanks for all of the wonderful work Fr. Newman and his people are doing at St. Mary’s. I wanna be his Parochial Vicar. . .

One objective of the liturgical reforms of the 1960’s was to encourage the active participation ["actuosam. . .participationem" means "actual participation" (SC14)]* of the Catholic people in the celebration of the sacred liturgy, in part by reminding them that they are participants in, not spectators of, offering the sacrifice of praise at the heart of all Christian worship. Unfortunately, in the years following the II Vatican Council, the Church’s desire that all the faithful participate fully in the sacred liturgy was too often rendered a caricature of the Council’s teaching, and misconceptions about the true nature of active participation multiplied. This led to the frenzied expansion of “ministries” among the people and turned worship into a team sport [precisely!]. But it is possible to participate in the liturgy fully, consciously, and actively ["actually"] without ever leaving one’s pew, and it is likewise possible to serve busily as a musician or lector at Mass without truly participating in the sacred liturgy. Both of these are true because the primary meaning of active participation in the liturgy is worshipping the living God in Spirit and truth, and that in turn is an interior disposition of faith, hope, and love which cannot be measured by the presence or absence of physical activity. But this confusion about the role of the laity in the Church’s worship was not the only misconception to follow the liturgical reforms; similar mistakes were made about the part of the priest [oh boy, were there!].

Because of the mistaken idea that the whole congregation had to be “in motion” during the liturgy to be truly participating, the priest was gradually changed in the popular imagination from the celebrant of the Sacred Mysteries of salvation into the coordinator of the liturgical ministries of others [i.e. "Fr. Hollywood"]. And this false understanding of the ministerial priesthood produced the ever-expanding role of the “priest presider,” whose primary task was to make the congregation feel welcome and constantly engage them with eye contact and the embrace of his warm personality [i.e. "Fr. Oprah"]. Once these falsehoods were accepted, then the service of the priest in the liturgy became grotesquely misshapen, and instead of a humble steward of the mysteries whose only task was to draw back the veil between God and man and then hide himself in the folds, the priest became a ring-master or entertainer whose task was thought of as making the congregation feel good about itself. But, whatever that is, it is not Christian worship, and in the last two decades the Church has been gently finding a way back towards the right ordering of her public prayer. In February 2007 Pope Benedict XVI published an Apostolic Exhortation on the Most Holy Eucharist entitled Sacramentum Caritatis in which he discusses the need for priests to cultivate a proper ars celebrandi or art of celebrating the liturgy. In that document, the pope teaches that “the primary way to foster the participation of the People of God in the sacred rite is the proper celebration of the rite itself,” and an essential part of that work is removing the celebrant from the center of attention [i.e., the liturgy is not about you, Father! Get out of the way!] so that priest and people together can turn towards the LORD. Accomplishing this task of restoring God-centered liturgy is one of the main reasons for returning to the ancient and universal practice of priest and people standing together on the same side of the altar as they offer in Christ, each in their own way, the sacrifice of as true worship of the Father. In other words, the custom of ad orientem celebration enhances, rather than diminishes, the possibility of the people participating fully, consciously, and actively in the celebration of the sacred liturgy.

NB. There is nothing canonical or rubrical preventing the celebrant from adopting the ad orientum posture immediately. In fact, the rubrics of the Missal frequently assume an ad orientum posture on the part of the priest and the congregation; that is, the rubrics read in several places in the Missal, "The priest turns toward the people and says. . ."

*The idea here is pretty simple: full, conscious participation in the liturgy engages our God-given potential for becoming Christ and activates/actuates that potential. Your participation is necessary b/c God wills that His grace perfect your nature with our cooperation. So, you can be up and running around like Martha at Mass and fail utterly to fully and consciously participate in the Mystery. "Active participation" is about movement, speaking, singing, etc. ONLY insofar as these activities are signs of an interior disposition toward cooperating with God's grace to perfect you. "Active" here is used in the Thomistic sense of "making potential real" and not in the more modern sense of "acting out."