Ignorance is the beginning of knowing 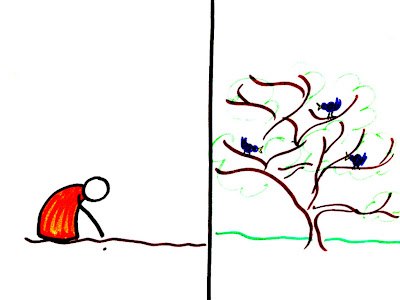 The Kingdom begins as a scattering of seed on the land. The seed sprouts and grows. Mark writes, “Of its own accord the land yields fruit…” And the one who tossed the seed does not know how the “the blade, then the ear, then the full grain in the ear” grew. It just did. . .of its own accord; “…he knows not how.” He does know how to harvest the ripe grain. He wields the sickle expertly. The Kingdom begins with a scattering of seed and ripens for the harvest. Jesus uses this parable to instruct the crowd on the power of the well-broadcast Word to turn unseeded land into a bumper crop! He then goes on to offer another parable—the parable of the mustard seed—to demonstrate the power of the Word sown, even the smallest whisper of the Word thrown out there and planted in rich soil. Sprouts. Big plants. Large branches. Lots of dwelling birds. Lots of shade. Fair enough. But then we have this strange ending to the reading. Mark steps out of the story and tells us how Jesus is telling the story, “With many such parables he spoke the word to them as they were able to understand it…” Why are parables the preferred means of revealing divine truth?

A parable resembles a metaphor that has been stretched with lively details to form a short, logical piece of instructive fiction. Generally, a parable's parallel significance is left unspoken, unwritten; it is merely implied. For the hearer with ears to hear and eyes to see, the implicit meaning is obvious and clear. The parable then becomes a vehicle not only for teaching the crowds but also for finding out who is called to the Way, who has the graced faculties to identify the seed of the Word and scatter it again.

Probably the most important element of the parable form in preaching is that what is left “unsaid”—the implicit meaning. What is unsaid and unsayable is vastly larger and more complex than what is heard initially; it is certainly wilder and more dangerous than anything explicitly revealed in the fiction, and, according to Mark, Jesus did not speak to the crowds unless he spoke to them in parables. Meaning, I think, that Jesus wanted to impart both an explicit and an implicit meaning. The first to grasp now. The second to grow on. If this is the case, then we can deduce that divine revelation is best imparted to us by the parable form b/c parables make it possible for us to hear what we can hear now and benefit from what we hear now AND parables plant a seed—an implicit seed—in our mental fields, a seed to sprout later and flourish as our own fertile soil grows more and more ready to be planted.

Mark writes: “Without parables [Jesus] did not speak to [the crowds], but to his own disciples he explained everything in private.” As his hand-picked students, the disciples are prepared to see and hear the raw truth, the purest Word. And where the great curious crowds required wordy, highly detailed parables in order to understand even a little, our Lord no doubt refused to lecture his students in this way. Why? They could see and hear the gospel b/c they had accepted his invitation to follow him. That act of obedience (of listening) cleared their ears and opened their eyes. And while the crowd milled around like vipers waiting for signs, the disciples struggled with their Master’s teaching precisely because they understood that they did not understand. In other words, they had perfect knowledge of their ignorance; and were, therefore, finally ready to be taught.

When you hear a parable and while you are struggling with its parallel meanings (implicit and explicit), ask yourself: am I ignorant enough to receive this Word? If not, pray for humility and listen!

NB. Don't forget to check out student ESSAYS. . .leave them comments and questions, please!
at 6:16 AM