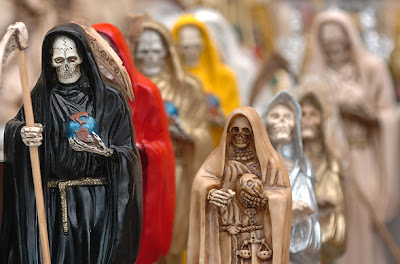 Simeon—a righteous man, very devout—is the only prophet of the Old Covenant to live to see the fulfillment of the Lord’s promise to send His people a savior. We can easily imagine that finding his savior in the temple radically changes Simeon’s ministry. From prophet who tells of the coming of the Lord to prophet who proclaims that the Messiah has come, Simeon becomes the first preacher of the Good News of Jesus Christ. Having received a promise from God that he would not die before he saw the Christ, Simeon goes to the temple “in the Spirit” and there he meets the Lord on his Presentation Day. Taking the Christ Child into his arms, Simeon announces for all the world to hear that this Child is “a light for revelation to the Gentiles, and glory for your people .” Now, he prays, let me die “according to your word.” I have seen he whom I have lived so long to see; now, Lord, “let your servant go in peace.” Wisely, Simeon, weary and worn from years of waiting, wants a way out. Why? Sure, he’s exhausted as a prophet. He has been waiting for a long time. Or, perhaps he is calling upon the Lord to let him die in peace b/c he knows what the prophet Malachi has seen: “Yes, he is coming…But who will endure the day of his coming? Who can stand when he appears? For he is like the refiner’s fire…”

What is it about spiritual refinement and purification that might make us want to rush into an earlier, promised death? As we fall head-long into an unreasonably early Lent, the problem of refinement and purification takes a front seat in our Lenten-Mobile. The sifting, separating, parsing out, the cleaning, the fasting and prayer, the “desert-time” alone with Christ our Rock, all those mental, physical, spiritual moments Away From the Ordinary, all of these “set asides” and sacrifices, all of them are mere mummery unless you are willing to die. And, yes, I mean “Die” not just “die to self” or “die to sin” but literally, Die; drop dead where you stand. This is not a matter of showing God how serious you are about your faith. He knows how serious you are or aren’t. This willingness to die—to say nothing of your eagerness to die—is about recognizing the inevitability of your end, about taking hold of your unavoidable death, and hurling yourself eyes and arms wide open into the Light that blinds with Love, that refines and purifies with holy fire.

Am I suggesting we become quietists? No. Maybe some sort of weird Catholic-Quaker combo? No. This all sounds like trendy Zen Catholicism with a dash of postmodern nihilism thrown in! No, again, no. I am suggesting that we do nothing less than what our Lord did for us. Live and breath and move about our lives conscious of the fact that as followers of the Way, “to die” means to be refined, to be purified in this life while we still live. There is nothing to fear in death if death itself is defeated, defeated in the splendor of hope we share in virtue of Christ’s suffering. The letter to the Hebrews is our assurance: “Jesus likewise shared [in the blood and flesh of God’s children], that through death he might destroy the one who has the power of death…the Devil, and free those who through fear of death had been subject to slavery all their life.”

As we giddy-up to Lent—recovering from the shock of its rude arrival so soon after Christmas!—as we ride headlong into our forty-day desert, remember that we, all of us, have seen the Lord’s salvation, His light of revelation for the Gentiles, and there is nothing left for us to do but die. . .and then live—exceedingly, joyfully, abundantly live!—as if death never mattered at all.