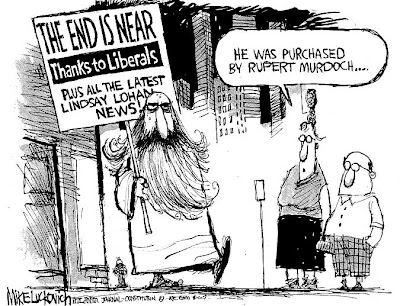 At their best, prophets are shady characters, dodgy types hanging out on the edges of decent society, always yelling about something, or telling people off, or threatening folks with the “End of the World” or God’s judgment. Apparently, it doesn’t take much to be a prophet these days. You need a loud mouth; a scary-slash-hopeful message about looming changes; a crowd of ego-massaging cultists to follow you around, mooning over you, fainting; and a friendly press corps with questionable ethics…oh wait…that’s a politician in an election year. Sorry. A prophet, a real prophet, on the other hand, is an anointed voice, a national conscience, a heart and mind given to God to see and hear where we as God’s people must go and how far we have strayed from our path. Consistently in scripture, prophets do not tell us what our ears itch to hear, and so we tend to draw them in vivid colors with wild hair, crazy eyes, disheveled clothing. They always seem to be spouting gibberish on the street. We prefer the prophets we listen to be well-dressed, clean-shaven, articulate, and liberal—that way they are easy to ignore, easier to manipulate, and easier still to get rid of when their usefulness is done. Let me ask you: when was the last time you listened to one of God’s prophets?

Prophets present us with a very difficult problem. Back in the day, it was simple enough to determine the divine-creds of someone claiming to be a prophet. The Lord was inclined to provide dramatic evidence of the prophet’s credentials. Fire from heaven. Water from rocks. Quick lift in a flying saucer. A general’s leprosy cured in the . Even Jesus pulled out the gasp-giving miracle or two to bolster his resume for the crowds. But now, since we are all accounted priests, prophets, and kings in virtue of our baptism into Christ’s death and resurrection, it seems that the much-applauded miraculous proof of prophet status has gone the way of dinosaurs and humble politicians. Do we entertain prophets unawares? Better yet, given our suspicion of prophecy in our times, if a prophet told us to do something extraordinary, would we do it? For that matter, would we do something perfectly ordinary if asked?

At first, Naaman ignored the prophet Elisha b/c Elisha told him to do something very ordinary to cure his leprosy. Naaman’s expectations for the extraordinary got in the way of his cure. Likewise, the people of , having grown up over the years with Jesus, ignored his prophetic preaching b/c they knew him too well. Prideful expectation and contempt for our own often blind us to the power of God’s anointing, deafen us to His Word spoken for our eternal benefit. We want spectacle as proof of prophetic legitimacy. We want to hear sunshine, bunny rabbits, and cotton candy from our McWorld/McChurch prophets. And our self-appointed prophets comply b/c they need the cash for upkeep on their fleet of Caddies.

We have to look carefully at what Jesus says about the power and purpose of a prophet. There were many widows in the due to famine. But Elijah was sent to just one widow. There were many lepers in . But Elisha was sent to just one leper. There were many sinners in the world. But Jesus was sent to the Jews. Does this mean that all the other starving widows, suffering lepers, and desperate sinners were out of luck? No. It means that a true prophet goes where he is sent, does what he is told to do, and very often the benefits of his work go to the stranger, the foreigner, the one we least expect to draw our Lord’s attention. It means that if we want to benefit from the prophet’s ministry among us, we must learn to expect nothing, be prepared for the extraordinary, and give thanks when nothing more than the perfectly ordinary happens.

Naaman is healed because he listens to his slaves. We are saved because we listen to a carpenter’s son. We believe on the testimony of fishermen, tax collectors, prostitutes, and thieves. Let me ask you again, how often have you entertained a prophet unawares?