Spiritual Warfare: who's the enemy? 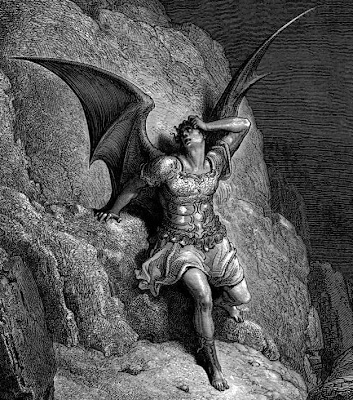 We are rushing headlong into God’s Kingdom. The war with Satan is over. He lost. With the advent of our Father’s Christ, the is at hand. We are wasting our time and treasure when we spend our lives fighting the Devil. Why continue to fight a defeated enemy? Spiritual warfare is not a war against evil. Rather it is a war to conquer our hesitation, our reluctance to claim the victory Christ won for us on the Cross. Our sign of victory is the Empty Tomb and the coming of the Holy Spirit. We don’t need weapons or strategies or a martial mindset to defeat Satan. Satan has lost. We are now fighting spiritual war against our own fears, our own faint hearts.

What is the problem with the notion of “spiritual warfare” when “spiritual warfare” is understood to be a fight against the forces of darkness? There are a number of problems. Here’s just two. First, we have to ask, why fight a defeated enemy? What aren’t we doing while we prepare to fight a war we have already won? Focused on fighting Satan, we fail to expend our spiritual resources on the real problem: human disobedience, the failure to hear the Word, to see the Word and to believe with heart, mind, body, and soul that no word or deed of a mere devil can stand against The Word himself. In other words, we play anxiously with a distraction and give the Devil hope.

Second, fighting the defeated Devil is an act of betrayal against Christ. How so? What exactly do you think Christ accomplished on the Cross? What exactly do you think the Empty Tomb testifies to? If the Devil still has power in your life and you need to fight him, then the Cross was always empty and the tomb littered with some rascally rabbi’s bones. Jesus clearly states to the doubters in the crowd, “…if it is by the finger of God that I drive out demons, then the has come upon you.” If you believe that Jesus drives out these demons with his Father’s power, then you believe the Kingdom has arrived and continues to manifest until Christ comes again. If you don’t believe that Jesus drives out demons with heavenly power, then it must be case that you believe he does so with the power of Hell. Either we live in the Father’s kingdom or the Devil’s dungeon. Unite the kingdom, or divide it. Gather victory, or scatter it.

Our Holy Fathers John Paul II and Benedict XVI teach us that we have come into the Paschal Mystery of Christ in our baptism. Meaning what? Meaning, when we were baptized, we took the first step along the Way to following behind our Lord in his public ministry, his suffering, death and his resurrection—his final victory over death. In other words, following Christ means doing what Christ did, suffering what Christ suffered, dying as Christ died, and rising with him when he rose. Do you believe that Christ was ever subject to Satan? Or that he is subject to Satan now? Of course not! Death is dead. Sin is powerless. The war is over. And Christ is the victor.

If you don’t believe this, then what are you doing here?