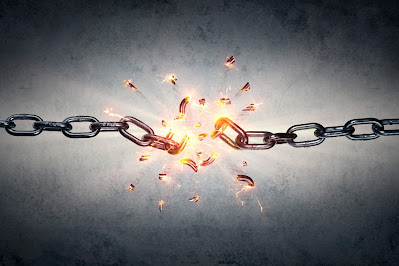 NB. This is my last Mass at OLR. I am moving back to Irving, TX on Monday, June 27th.

Christ set us free! From what? From the Law and from sin and death. How did he set us free? By taking on our broken human nature, dying on the Cross, and rising again from the tomb. Where and when did he set us free? Jerusalem in the first century. And here and now. New Orleans in the 21st century. Most importantly, why did Christ set us free? Paul says it as plainly as it can be said: “For freedom Christ set us free.” For no other reason are we set free from the slavery of sin and death. And so, Paul urges us not to fall back into sin, not to put ourselves back into chains. He says, “...do not use this freedom as an opportunity for the flesh.” Do not abuse your freedom as a chance to wallow in the world – the world of violence, hatred, lust, anger, and revenge. That world refuses the gift of freedom and is kept in slavery to serve chaotic passions absent reason. So, do not abuse your freedom, Paul, says; “...rather, serve one another through love.” That's true freedom. Not a license to do whatever we feel like doing. Not permission to pick and choose from among nearly infinite options. But the recognition that we have an end, a goal and that goal is best reached by loving service to our neighbors.

Loving and serving our neighbors is nothing new for those who follow Christ. The only element of our loving service that changes is the circumstances in which we serve lovingly. It might be a war, a plague, a natural disaster; or something less dramatic like a death in the family or a financial crisis. What never changes is the urgency of our service, the urgency of our YES to Christ. This urgency is daunting; it's intimidating because we have our things to get done. I've been packing and cleaning these last three weeks. Not only my own stuff but the accumulated stuff of 98yrs in St. Dominic Priory. I wanted to be focused and diligent. But Christ kept calling me to service. I had to serve on the Provincial Chapter for two weeks. I had to arrange and preach the funeral of a brother who died earlier this month. I had to take over the financial management of the priory. I had to preside at the profession of the Priestly Fraternity of St. Dominic. Among a thousand other acts of service. I was annoyed, impatient, sometimes rude, and always reluctant to give my time. Then, I read the Gospel for this evening: “No one who sets a hand to the plow and looks to what was left behind is fit for the kingdom of God.” Chastened, I closed my big whiny mouth and got back to work.

Three people approach Jesus to express their desire to follow after him. Each one has an excuse for not doing so immediately. They didn't feel the necessary urgency in taking up their crosses. The first thinks that following Jesus means literally traveling around in his entourage. Jesus teaches him (and us) that following him is not a matter of physical proximity to him but rather a matter of loving service wherever we find ourselves. The second wants to bury his father first, an ancient religious custom worthy of respect. Jesus teaches him (and us) that those who do not follow him are already dead. Let them bury those who have died. We have work to do right now. The last, wants to say goodbye to his family before he follows Christ. Again, a failure to feel the urgency of loving service. Jesus teaches him (and us) that once we've chosen to follow him, there's no looking back. Serve or do not. There is no try, there is no turning around to contemplate what we've left behind. Our work as followers of Christ is before us, waiting for us up ahead.

So, when Paul says that Christ freed us for freedom, he means that Christ saved us from sin and death so that we may serve lovingly without the distractions of sin and death. The works of the flesh keep us bound to sin, chained in slavery. Each of the three who wanted to follow Christ were slaves to a demand, a custom, an idea of living that prevented them from enjoying the urgency of Christ's work. What is the chain binding you? Probably one of the usual suspects: money, time, false humility; pride, hoarding your gifts for yourself, impatience with other sinners. Or, is that just me? Maybe you've acquired an odd notion of love – it's all about feeling warm and fuzzy! It's all about unconditional approval and acceptance. Or some weird idea about service – it's the gov't's job or Church agency's job or those-other-people-over- there's job. No where to lay your head. Let the dead bury the dead. Don't look back. “I say, then: live by the Spirit and you will certainly not gratify the desire of the flesh.” Christ set us free for freedom. Christ set us free so that we might live in the state of being free. Free from sin. Free from eternal death. Free from the poisonous narcissism that is consuming our nation. Free from the irrational passions that are herding our neighbors into hell. Free from all of those things-of-the-flesh that turn us into fools and deceive us into believing that we can be God w/o God. Christ set you free for freedom. Beware that you do not sell yourself back into slavery.