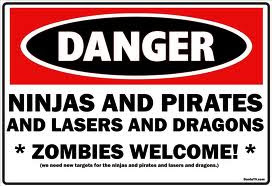 So, here's what got me thinking: Christianity's Dangerous Idea.

It took me a few decades to resolve a basic question about myself: who do you want to be?

I didn't say to myself, "Self, be the most dangerous person you can be!" That sort of response strikes me as incredibly pretentious. (I can hear Scuba Mom yelling at me, "GET IN HERE AND PICK UP YOUR DIRTY SOCKS, FATHER! NOW!" So much for pretense).

Anyway, let's assume for a moment that Christianity -- in all of it many forms -- is indeed a Dangerous Idea. Hitchens (in the link above) argues that Christianity is a dangerous idea b/c Christians believe that Jesus is the Son of God and that he rose from the dead. Start with this idea and things get scary quick.

My question to you: as a Christian, what do you think is dangerous about Christianity and why?

Leave your response in the combox, and I will tack it on the post as an update.

I feel a lot of good homily material coming my way!

Response from Anon:  Christianity is dangerous because it demands that we conform ourselves to something external, or better, to Someone external. Our lives are not our own to dispose of as we wish. God makes demands of us, and He has the right to do so because He made us. Because He recognizes that we are sinful, in His mercy He has given us the Sacraments as the means to become fortified in grace and to become reconciled with Him. Even so, we squander graces more than we realize and continue to stumble in our sinfulness. Christianity teaches us to tame our wills, probably the most challenging demand ever made, and for many, a demand too radical for the human ego to abide.

Response from Gregg the Obscure: Christianity is dangerous because it requires us to forgive those who trespass against us.

Response from Shelly: Truth is always dangerous, and Christianity has the Truth and is not shy about speaking it, which angers those who hope to disregard Truth and "change reality" to fit their own agendas.

Love can also be dangerous, since Christianity speaks of loving as the Lord loves us, even to loving one's enemies - how can you encourage others to be jealous, or hate, or subjugate, or take advantage, of others when love is an over-riding concern?

And Christianity speaks to a Higher Power - the Highest Power - to whom Christians look for guidance...Christianity does not look to the world as the end of all things. There is more. And since that "more" is more important than anything here on this earth, then it is very difficult for an outside power to coerce Christians to follow along if the path being shown does not lead to Heaven.

Dangerous to those who want power, who want to control humanity ....

Response from cmom: It localizes one's existence in God rather than the state.

Response from Keith: In today's America, it is dangerous because it points out that those who are to feed the hungry, clothe the naked, tend the sick and visit the prisoners, are those of us who are Christians. Christ, insofar as I can determine from Sacred Scripture, never enjoined us to petition Caesar (in whatever form is contextually relevant) to take what God has bestowed upon us as individuals and families and establish public structures to see to those duties. If that understanding is correct and were it to be followed there are a large number of people, including but by no means limited to, those who are employed by Caesar's bureaus, departments, etc., to effect the delivery of those goods and services. That alone, if it were followed, would make a substantial number of our fellow citizens extremely unhappy.

Response from Pat: Christianity is dangerous because when you realize that God loves you enough to become human and die on a cross for you, that requires an unconditional response on you part.

Response from Suzanne: Well consider that Christ was crucified for preaching love. God's love. That is what is dangerous. God's love is what messes up everybody's thoughts and plans. And the world is ready to crucify you for it.

Response from Melissa: Christianity is dangerous because it can devastate one's financial bottom line. Imagine what would happen if a huge corporation actually took Christ's demands to heart! Fair pay, no unnecessary work on Sundays, charity to the poor, love instead of competition . . . No wonder American society is so opposed to Christianity!

Response from Matheus: I find this to be an enormously complex issue, but what comes to my mind right now is that it is dangerous because it definitely sets one apart from a worldly existence. The very concept of God Himself fully becoming a man, and then facing excruciating torture and death for our sake renders not only life itself, but everything even remotely pertaining to it "new" and "special" (for shameful lack of better words), therefore obligatorily changing the way it is lived on every possible level.
_________________