NB.  The deacons are preaching this weekend, so here's a Roman homily from 2010 that I never got to preach. 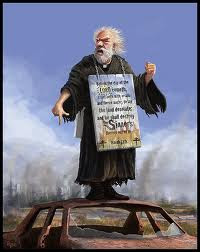 Jesus, once again, riles people up! He's good at that. Like prophets before him, he tells people what they don't want to hear. By proclaiming that Isaiah's prophecy of the coming of the Messiah has been fulfilled in their hearing, Jesus challenges those gathered in the temple to step up and believe that he embodies God's promise of salvation. Instead, assuming that the authority of a majority is sufficient to determine truth, the crowd runs him out of town and tries to lynch him. He walks unharmed through the riot and leaves town. Why do the temple-goers reject Jesus' claim to be the fulfillment of God's promise to send a Messiah? Two reasons: 1) Jesus is a local boy, and we all know that “no prophet is accepted in his native place;” and 2) Jesus' use of proverb, “Physician, cure yourself,” indicates his refusal to perform a showy miracle to confirm his identity. What does he do instead? He does exactly what pastors and preachers are taught in seminary not to do when parishioners get twitchy. He throws down a challenge and a rebuke. In essence, he says, “God's own people have always rejected His prophets, and look at the results. He graces Gentiles before Jews and you people never learn.” Ouch. If Jesus had had a bishop, His Excellency's phone would be ringing off the hook! Remember how often we are told that Jesus is a uniter not a divider, a peace-bringer not a controversialist. He's all about harmony and consensus and living within the tensions of difference. Well, tell that to the screaming lynch mob. They might disagree. Obviously, Jesus lacked the cultured pastoral touch of a postmodern bishop. So, should we look to him and his prophetic style as a model for preaching his gospel?

Confrontation has its place in preaching. The prophets of the Old Testament were known and feared for their unwavering commitment to speaking God's message even in the face of torture and execution. Kings dodged them when possible, summoning them to court to answer for their traitorous speech only when necessary. Prophets were notoriously stubborn, self-righteous, and usually disreputably attired. Any one of these three characteristics was enough to warrant royal and public dismissal. Add to the scene the fact that prophets tended to be well-known local boys and you have the makings of a courtly farce. Is it any wonder then that the prophets of old resorted to confrontation when dealing with the cold-hearts and closed-minds of a nation's rulers? Sometimes you have to smash through a wall when the door is barred. Sometimes the shock of hearing the truth spoken aloud is enough to cure the deafness of the worst sinner. And sometimes it isn't. On these occasions, it's wise to get as far away from the condemned nation as possible. Why? Because quite possibly the scariest thing a prophet can say is: “Behold, you will suffer the consequences of your hard heart!” It's time to run.

Unfortunately, these days, it seems that every corner, every cable channel, every church/mosque/temple has its own prophet proclaiming the coming apocalypse. Like a flock of squawking crows, these folks fly around the world squeaking and squealing warning us of imminent local destruction and the inevitability of global disaster if we don't change our ways. They have adopted the confrontational rhetoric of the wildest biblical prophet. Do we listen? Some certainly do. Most don't. Confrontation oft repeated quickly devolves into annoying harassment. Those ominous crows start to look and sound like Chicken Little's. What's missing from their squealy prophesying is Godly love, a sincere concern for the good of the whole beyond the immediate personal benefits of power and prestige. What's missing is the divine authority that Jesus himself uses in the temple to announce his arrival as the Messiah. His authority is the power and glory of the most excellent way, the way of sacrificial love.

This leads us to the big question of the day: can sacrificial love be confrontational? Anyone who has ever marched in a pro-life demonstration or prayed outside an abortion clinic will tell you that the counter-protesters and the escorts are demonically vicious. For them this isn't just about freedom of choice and left/right politics. They hate us. Passionately hate us. You can expect that groups on opposite ends of the political spectrum to get feisty, maybe even a little rowdy, in the midst of a march. But the bile and venom spewed by pro-abortion activists at pro-life folks goes well beyond the kind of anger that normal politics generates. Why? The choice to have an abortion is intensely personal; it goes to the very core what most Americans think of us their untouchable autonomy in deciding what's best for them. An unwanted pregnancy attaches unwanted responsibilities and necessarily limits a woman's choice of options. But even more than this, pregnancy places a woman in the natural mode of motherhood and all that that implies. At the very core of motherhood is sacrificial love, giving oneself wholly to another. When pro-life marchers remind abortion advocates that the fetus is a person, a being deserving of love, those who would call the killing of this person a moral good react with unadulterated rage. They know the Church is right. And they must cultivate a self-righteous wrath in order to drown out their guilt. The gospel message of love used by the pro-life movement to stubbornly resist compromising with the culture of death shames them into hatred. Denied a convenient salve for their seared consciences, the venom flows and they fall more securely into demonic hands.

It should be shockingly clear to the Church by now that our best witness to the culture of death is sacrificial love. Paul writes, “Love is patient, love is kind. . .it does not rejoice over wrongdoing but rejoices with the truth. It bears all things, believes all things, hopes all things, endures all things.” With some we can reason. With others we can demonstrate. But some we must simply love. Bearing up under the burden of hatred, believing solely in the power of mercy, hoping in the promises of the Father, and enduring insult, persecution, and trial, the Church must not be satisfied with merely presenting the truth of the gospel, flashing cue cards and murmuring sound bites. What will heal a seared conscience cannot be logically deduced and crammed onto a bumper sticker. Slogans on placards are easily refuted by other slogans on placards. What cannot be refuted is an act of love done in sacrifice, a willing act of surrender done so that another might be see the truth. Paul reminds us what we know by faith, “Love never fails.” Even as the prophet feels the sword cut into his flesh, he knows that he has succeeded in touching a conscience burned by hatred and malice. His persistence in telling the truth is not ended by death but rather vindicated by it, shown to be the undeniably divine power it truly is.

When he proclaims to the people in the temple that Isaiah's messanic prophecy has been fulfilled in their hearing and subsequently chastises the crowd for their unbelief, Jesus causes a riot. He holds up before the people their dishonesty, their faithlessness, their charred consciences. He shows them that they know he is telling the truth and yet still refuse to hear it spoken. For them to believe such a proclamation changes everything-- uproots centuries of tradition and belief, revolutionizes everyday life, forces them to make a choice and live by it. Rather than surrender, they riot and pour out the hatred and malice of those who have seen the corrupted state of their souls. How does Jesus respond? He dies on the cross for them. If we will be his Church, we must be prepared to do nothing less. The march for life is a march to the cross. . .not for ourselves but for those who will not see, will not hear.
______________