In deed and truth, love 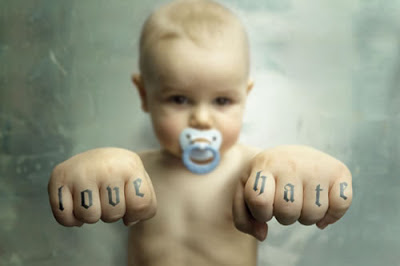 
On Christmas day 2012, an on-line petition appeared on the White House website, calling on the president to declare the Catholic Church a “hate group.” The petition was posted as a response to Holy Father's Christmas address to the College of Cardinals. In part, the petition reads, “Pope Benedict said that gay people starting families are threatening to society, and that gay parents objectify and take away the dignity of children. . .The Pope also implied that gay families are sub-human, as they are not dignified in the eyes of God.” You will not be surprised to hear that the Holy Father said no such thing and that the hate-mongering charge against the Church is false to its core. So, why was this petition posted? It's mostly an intimidation tactic aimed at silencing Catholic opposition to same-sex marriage. But the spirit motivating the petition goes well beyond the politics of the culture wars. John writes that Cain murdered Abel b/c Abel's works were righteous while he own were evil. He says, “Do not be amazed, then, brothers and sisters, if the world hates you.” Don't be surprised when your love for God and your pursuit of righteousness drives the powers of this world to loathe you. Evil always responds to rejection with hatred and violence.

How do we—imperfect followers of Christ—respond to the hatred and violence of evil? John writes, “The way we came to know love was that he laid down his life for us. . .Children, let us love not in word or speech but in deed and truth.” Love Himself laid down his life for us so that we might not only love him perfectly in turn but do so by loving one another as he loves us. The only proper response to the violence and hatred of evil is to love in deed and truth; that is, to draw upon the love Christ revealed to us in his sacrificial death on the cross: to die for one another as brothers and sisters, to die in love even for those who call us their enemies. John is crystal clear about this: “Whoever does not love remains in death.” It might help for us to remember that God—Love Himself—spoke the Word across the void to create in love everything that is. Evil is the void, that nothingness from the beginning, that longs for the corruption and destruction of all that God creates. Just as Love Himself filled the void with His creating love, so we too must fill the vacant spirits of human evil with the love Christ reveals on his cross.

How do we accomplish this? Argument, rhetoric, snarky bumper stickers, nor well-intentioned laws can help us love as Christ loves us nor can they show those possessed by a spirit of violence and hatred the way out of evil. When Jesus finds Philip in Galilee, he says to him, “Follow me.” Philip tells Nathanael that he has found the Messiah, but Nathanael wonders if this is true. Philip answers in the only way he can: “Come and see.” In essence, Philip answers Nathanael's skepticism by saying, “Follow me and see for yourself that the Messiah is among us.” This is how we show those possessed by the spirits of violence and hatred how to be free of the void that's trapped them, “Follow me to Christ and see what love has done for us all.” Those who hate us b/c we love God and seek righteousness need our sacrificial love more than anyone. And we need—more than anything else—to love them. Loving those who love us is good, but what credit is it us to love the loving? We are charged to love in deed and truth, meaning our love is not to be compromised by fudging the truth for comfort's sake. We cannot love while lying about the truth of the faith nor can we honestly say, “Come and see” if what we have to show is false. The only answer to this world's violent hatred of truth and goodness is a loving soul's death for sake of righteousness.
_____________