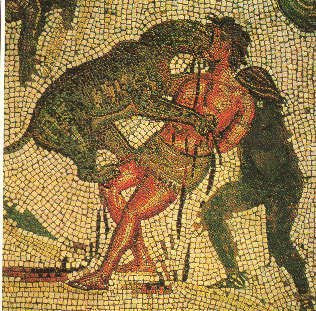 Origen, in his Exhortation to Martyrdom, writes, “If passing from unbelief to faith means that we have passed from death to life, we should not be surprised to find that world hates us. Anyone who has not passed from death to life is incapable of loving those who have departed from death’s dark dwelling place…” Generally, we think of martyrdom as the ultimate sacrifice of one’s life in defense of the faith. We think of the apostles, all but one of whom died at the hands of God’s enemies fighting the good fight. We think of Lucy and Agnes and more recently, Friar Kolbe and Edith Stein in Nazi Germany. All witnesses to the faith, all testimonies written in blood. Origen is directing us to a more subtle, bloodless martyrdom, the so-called “white martyrdom” of everyday life, everyday faith. We should note here that Origen is not going soft on us in proposing the possibility of white martyrdom; after all, Origen is the one who, in his zeal, castrated himself in the pagan Greek fashion in order to show his dedication! Origen most definitely still hold a “red martyrdom as a glorious and sometimes necessary act of zeal. What he is doing when he suggests that moving from “unbelief to belief” is the same as moving from “death to life” is emphasizing that when we come to believe we die to the world, that is, we no longer belong to the appetites, princes, systems, philosophies, and gods of a fallen creation. We belong to the Father!

In his priestly prayer before going to the Garden, Jesus prays, “Holy Father, keep them in your name that you gave me, so that they may be one just as we are one.” Just as the Father and Son are one, so we are one with the Father in Christ: “They do not belong to the world any more than I belong to the world,” Jesus says, “Consecrate them in the truth. Your word is truth.” Set aside by the Father for the task of preaching and teaching His mercy, Christ both heralds the truth of the Word and he is the Word made flesh. So, in him, as his brothers and sisters, adopted sons and daughters of the Father, we too are to be His Word made flesh in order to proclaim the truth of the Good News: “As you sent me into the world, so I sent them into the world.” When we accept this commission—to go into the world, preaching the Gospel—we die a martyr’s death.

As bleak as this might sound—no one would ever accuse Origen of being cheery!—the martyr’s death (then and now) is hardly a lamentable event. Paul writes to the Corinthians: “We are treated as deceivers and yet are truthful;…as dying yet behold we live; as chastised and yet not put to death; as sorrowful yet always rejoicing…” What the world sees as a waste of life in obedience to the Word, we count as Life itself. What the world sees as prudish excess, we count as virtue and the way to holiness. What the world sees as slavery to poverty and service, we count as freedom to come to His perfection. We have nothing yet possess all things in Christ Jesus!

In his exhortation, Origen pushes us to suffer with Christ, to share in his sufferings, to purify and elevate ourselves by doing what Christ did. Christ did not suffer instead of us; he suffered for us so that we might see where we belong most beautifully: among those who listen to and act on the love our Lord has for us. Being loved by the Father and loving Him in return marks us—even scars us—with the sign of His ownership, the cross. And because we believe, the world hates us. Why? Origen writes, “In Christ and with Christ the martyrs disarm the principalities and powers and share in his triumph over them…” What the powers of this world will not tolerate is our refusal to celebrate its disobedience to God. Desperately in need of our acceptance and approval—think here of Satan in ’s Paradise Lost—the powers of this world see in us a body unwilling to bend to an authority that acts against the will of the Father.