Listen, God so loved the world... 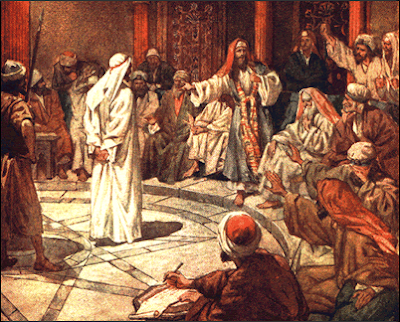 If I were a bit more technologically competent and we had the equipment here in the chapel for viewing audio-video, I might offer this homily this morning as a short film. The characters, scene, and action would be scripted using Luke’s account in Acts of the Sadducees arresting and confining the Apostles; their escape from prison with angelic help; the teaching and preaching in the temple area; the Sanhedrin’s discovery of their escape; and the eventual return of the apostles to trial. These scenes would be silent. The action of the priests and guards speaking loudly enough. The narration for the film would come from John 3.16, our gospel passage this morning.

Laid over the scene of the Sadducees’ expression of jealousy and the public arrest of the apostle’s is a gentle voice, saying “God so loved the world that he have his only-begotten Son, so that everyone who believes in him might not perish but have eternal life.” Then we might think, watching and listening, why are they jealous? All they have to do is believe!

Then the whole scene brightens white and the angel releases the apostles from jail. The angel tells them to go to the temple area to teach. As they move silently into position outside the temple, that gentle narrator’s voice rises again and says, “…God did not send his Son into the world to condemn the world, but that the world might be saved through him. Whoever believes in him will not be condemned…whoever does not believe has already been condemned.” We can see the lips of all the apostles moving as they teach, hands flying in emphasis, and we hear, as if each is speaking one Word together: “Listen, God so loved the world that he gave us his only Son. . .”

This scene fades and the lights come up on the Sanhedrin convening, readying itself for a trial of heresy. The high priest gestures for the jailed apostles to be brought forward. Over the action, we hear that gospel voice again, saying, “And this is the verdict, that the light came into the world, but people preferred darkness to light. . .” The guards report that the prisoners were not in the cells—cells securely locked and guarded. The gospel voice rises again, “God did NOT send his Son into the world to condemn the world…”* And the chief priests and the guards become agitated, miming dismay among themselves, wondering what this might mean. The Chief Priest wants the apostles found. The guards, under orders but also in the darkness, begin their search—“because their works were evil”—the voice whispers just for us.

The little chaos of the court is stopped when someone comes in and indicates that the apostles are in the temple area teaching: “For God so loved the world”—they teach—“that he gave us his only Son for our redemption. . .” The captain and his guards run to the temple area and find the apostles there preaching: “For everyone who does wicked things hates the light…so that his works might not be exposed.” The guards collect the apostles without using any force because they were afraid that the people would stone them. And the gospel voice says, “…whoever lives the truth comes to the light, so that his works may be clearly seen as done in God.” Walking back to the Sanhedrin with the bound apostles, the guards hide their eyes. The voice says, “people preferred the darkness, people preferred the darkness.”

Finally, the captain stands the apostles before the Sanhedrin, his eyes firmly shut. The Chief Priest opens his mouth to pronounce his verdict on the heretics and rebels…we see his mouth move but we hear another voice say these words, “And this is the verdict, that the light came into the world, but people preferred the darkness to light. . .” We see the guards look confused. The Chief Priest is panicked by his own words. The Apostles nod knowingly, lovingly, smiling. Then the Chief Priest, hesitantly, very reluctantly opens his mouth again, and we hear our gospel voice again say with his lips, “. . .they preferred the darkness to light because their works were evil.” Eyes wide open, the Chief Priest closes his mouth.

The Apostles turn. Their bound hands now unbounded rise in praise. There’s a long silence. No movement. As the guards and priests watch over the apostles’ shoulders, the gospel voice, again with a loud whisper, one not to be ignored, proclaims, “God so loved the world that he gave his only-begotten Son so that everyone who believes in him might not perish but might have eternal life.” The Chief and his guards step back, out of scene.

*I left out this crucial "not" in the printed text and Br. Michael dutifully read my incorrect text for the Podcast...