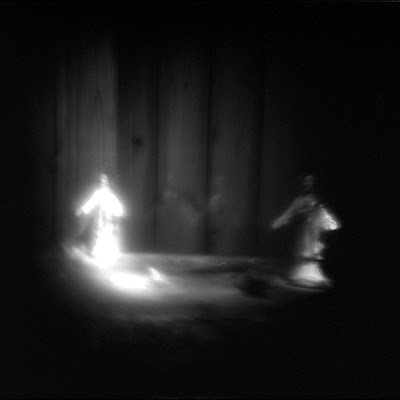 “You were once darkness…,” Paul says, once you were of the dark, its son or daughter, once asleep in the dark, in secret, invisible, yourself blind to the light and stumbling, running a curling path along the cliff’s edge, just teetering on the precipice above the yawning void. It is thrilling, isn’t it? Dangerous, yes; a threat to life and limb, of course; but also dizzying, heady, eerily intoxicating—an eternity falling into darkness, touching absolutely nothing; seeing, hearing, feeling absolutely nothing. . .forever. Darkness holds out the promise of annihilation, the beginningless and endless nullity of all things; the dark we know here/now is just a taste, a mere sip from the cup of obliteration we flirt with in our Nights, in our days without the Light. Paul tells the Ephesians, “You were once darkness, but now you are light in the Lord!” And so, we must live as children of the light: “Awake, O Sleeper! and arise from the dead…!”

It is difficult for me to read the gospel this morning/evening without thinking about God’s Poet, Dante. We just finished the Paradiso in my freshman class, and as soon as I saw the gospel selection I thought of Dante with Beatrice in heaven: “The glory of the One who moves all things/permeates the universe and glows/in one part more and in another less./I was within the heaven that receives/more of His light; and I saw things that he/who from that height descends, forgets or can/not speak;…/almost/all of that hemisphere was white while ours/was dark when I saw Beatrice turn round/and left, that she might see the sun; no eagle/has ever stared so steadily at it…/The eyes of Beatrice were all intent/on the eternal circles; from the sun,/I turned aside; I set my eyes on her./In watching her, within me I was changed…/Passing beyond the human cannot be/worded…/Whether I only was the part of me/that You created last, You governing/the heavens know: it was Your light that raised me” (I.1-7, 44-48, 64-67, 73-75). Dante confirms for us three truths: 1) that God’s glory permeates, penetrates all things, heaven and earth; 2) that to look directly at His glory, we must be filled with His glory; and 3) that if we ourselves are not entirely prepared to look directly at His face, it is possible to experience His glory in another.

Take the man born blind. Having never seen in the light, the man is incapable of knowing anything but what he finds in the dark. What he knows in his darkness is scorn, abuse, neglect; maybe, occasionally, pity and the begrudging act of kindness. What he knows is sin, being set out, set apart and away, cast aside like garbage. He begs to live, hoping that those who hate him for his sin do not hate their chances of salvation more and by hating him more will give him something, anything to eat.

Jesus passes by and sees him. Others have seen him as well: neighbors, passersby. But Jesus sees him exactly as he is and not as his sin configures him for public display. Jesus sees a shining soul bound in pitch-black chains, a man born blind and in desperate need of sight. Taking dirt and spit, Jesus makes a paste and smears it on the beggar’s darkened eyes. And then sends him to wash in the Pool of Siloam—“the pool of one who has been sent.” The beggar comes back able to see, blind no more. How was he healed? Magic dirt? Magic spit? Holy water in the pool? None of these. Jesus says, “Go wash in the Pool of Siloam…So [the man born blind] went and washed…” He is healed by the grace of obedience; he listens and does as he is commanded to do, thus making his work righteous and fruitful! Our poet/pilgrim, Dante, in the company of Beatrice, writes as he grows toward God’s glory in heaven: “Passing beyond the human cannot be/worded…” Our healed beggar begs to differ and says, “Lord, I do believe.”

We must be sure to notice that the Man Born Blind obeys Jesus before he is healed. After the Pharisees question him and toss him aside—yet again!—for his alleged audacity in teaching them, Jesus questions him, “Do you believe in the Son of Man?” The man replies, “Who is he, sir, that I may believe in him?” Here’s what we need to pay attention to: this beggar is not asking Jesus for proof that the Son of Man exists or for proof that the Son of Man has come…this beggar is asking Jesus to name the Son of Man so that he might believe on that Name! Who is this Son of Man? Jesus says, “You have seen him, and the one speaking with you is he.” These are the same words with which Jesus revealed himself to the Samaritan woman at the well. Her own exclamation of belief—“Lord, give me this water!—revealed a deeply seeded faith in the Messiah; for her, a Messiah not yet given a name. For both the Samaritan Woman and the Man Born Blind, Jesus, with his personal presence to them, reveals the fulfillment of their faith, the culmination of their trust in the word of the prophets that our Lord would come among us and heal every wound.

The Woman fetched water before Jesus revealed himself to her. The Man went to the pool to wash before Jesus revealed himself to him. And because these two exercised the grace of obedience—the gift we are all given to listen and obey—both are healed, both receive the divine light so that they might see the Messiah standing before them. Their darkness is lifted and the glory of God shines through. Paul writes, “…everything exposed by the light becomes visible, for everything that becomes visible is light…Therefore…Awake, O sleeper…and Christ will give you light.” First, we believe, and then we shine.

Lent is not a season for us to duck and weave around temptation. Lent is about putting one foot in front of the other, walking across the scorching dunes of withdrawal and unfulfilled desire. That which tempts you coils up and out, coming to a blistering head, living as a cyst on the skin, readily seen. Exposed to the Lenten sun, all the darkness in you worms its way out and proudly preaches its gospel of occult lies. You will know then the name of the Darkness that keeps you bound. If you spend Lent trying to avoid your temptations, racing around them, running from them, you will only succeed in helping them to build muscle, bigger and better muscles with which to conquer you unawares. The Woman at the Well and the Man Born Blind looked directly into the glory of God, straight through their own temptations, right at the source of their salvation—Jesus himself—and they saw in the light a man named The Christ. They were healed.

“Awake, O sleeper. and arise from the dead, and Christ will give you light.” Just two more weeks of this, just two more weeks of our desert trek, and we will with Christ rise from the dead. In the meantime, the time between now and then, find the names of your temptations, expose them to the light, hold them up to the glory of God, and see them for what they truly are: enticements, bribes to live without the Father now so that you might live with the Darkness forever. Open your eyes to see, let the light in and “take no part in the fruitless works of darkness.” You are light in the Lord, therefore, live as children of the light!