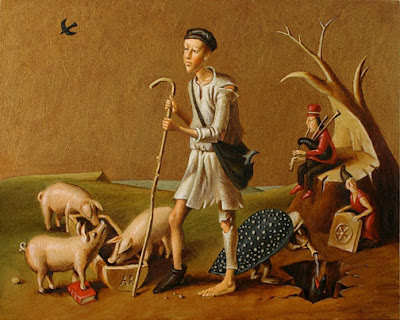 The Pharisees hate sinners. Jesus loves them. For the Pharisees, Jesus’ love of sinners is more than just annoying; it’s downright dangerous. Any sensible person can see that loving sinners—even while hating the sin—can easily lead the sinner to think that his or her sin is somehow OK. We can’t have sinners thinking, “Well, I’m a sinner but folks seem to love me anyway, so my sinning must not be so bad after all…” This is a dangerous way to think. True, Jesus loved sinners. But surely there are seriously practical limits on which sinners get loved. Just random, gratuitous, free-for-all loving Everybody just seems so untidy? So messy and free! Where’s the cost of sinning when we just love everybody all the time regardless? Isn’t love all about rewarding the Good?

Fortunately, we have the Parable of the Prodigal Son to answer this question! The standard parsing of this parable goes something like this: the younger son is the Sinner. The older son is the self-righteous Do-Gooder. And the father in the story is God. The Sinner sins. The Father welcomes the Sinner home. The Do-Gooder whines about not being rewarded for being a do-gooder. The moral of the story: no matter how sinful we are we are always welcomed home by God our Father—even over the objections of the jealous prigs in the church. Nothing wrong with that. It occurred to me, however, that if we focus on the prodigality of the younger son, his adventures in squandering his inheritance, we might see, through slightly squinted eyes, another, fruitful way to parse the parable. Bear with me.

We call the younger son “prodigal” because he wastes his inheritance on wine, women, and song: “…on a life of dissipation…[he] freely spent everything.” There is no good reason, however, to limit the notion of prodigality to useless waste. Why can’t we think of prodigality as useful waste, or as the extravagant giving of gifts without regard to merit or the possibility of repayment? The younger son took his share of his father’s property and bestowed it freely on prostitutes, bartenders, waiters, and hookah baristas. I doubt these folks saw his largesse as wasteful. He expended his treasure, and his “wastefulness” benefited others. In fact, his generosity brought him very close to death—the last sacrifice he could make. In the rank humility of his destitution, he calls out to his father for help, pledging himself to yet another prodigal enterprise: conversion, confession, contrition, and penance. He is received by his father, who is “filled with compassion,” and his return is abundantly celebrated.

In one very important respect, our prodigal pal looks like Christ. What could be more extravagant, more over-the-top, more excessively unnecessary and wasteful than giving your life away on a cross because you find yourself in love with billions and billions of sinners. What is more ridiculous than squandering your very life to love sinners. . .some of whom will never love you back, will never love anyone at all. Is there a less efficient means of loving sinners than sacrificing your life for them. . .just on the off-chance that some of them, maybe most, maybe just a few, on the off-chance that some will come to love perfectly with you. The Prodigal Son wastes his inheritance on sinners. So does Jesus. The Prodigal Son finds himself hungry, alone, and near death. So does Jesus. The Prodigal Son calls out to his father in the last moment, surrendering himself to his father’s will. And so does Jesus. One lives and one dies but both are welcomed home by an exceedingly compassionate father. One lives as an example to sinners. The other dies as a sacrifice for sinners. Living and dying, both did so copiously, richly, prosperously.