Empty out to be filled up 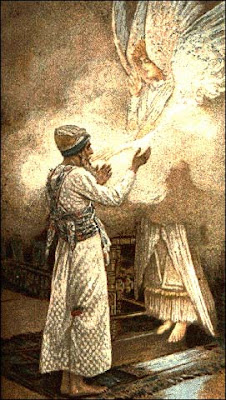 [One of the novices said that this homily is "kinda blah." I agree. My insomnia is catching up with me. . .]

Zechariah is troubled, and fear comes upon him. Gabriel, the archangel, is telling him that Elizabeth, his barren wife, will conceive a son and that that son will grow up to become the prophet, John the Baptist, whose mission it will be to herald the coming of the Christ. For one second, just a flash of small wonderment, Zechariah, almost whispering, asks the angel, “How shall I know this?” The price for his passing doubt, his lapse in trust is the loss of his ability to speak. He is struck mute. His tongue will be untied when Gabriel’s announcement comes to pass, when John the Baptist is born. Why is silence the proper punishment for Zechariah’s anxiety?

You might wonder at Zechariah’s doubt. Here he is in the temple, chosen by lots to offer the sacrifice of incense, and the archangel, Gabriel, appears to him with a message from God. Gabriel calmly delivers the message with some detail and then pauses for Zechariah’s answer. And what does the priest do? He asks for a sign, something like a confirmation code! Let’s see: how about an archangel materializing out of a cloud of incense in the holy of holies! Zechariah’s desire for a confirming sign is taken by Gabriel to be a sign of the priest’s weakness. Neither John or the Christ will be best served by a weak heart or a weak tongue. This is a time for strength, conviction, and prophetic zeal! So, the angel silences Zechariah’s doubting tongue to keep him from speaking foolishly about God’s plan.

The 14th century Dominican mystic, John Tauler, preaches: “God cannot leave things empty; that would be to contradict his own nature and justice. Therefore, you must be silent. Then the Word of this birth can be spoken in you and you will be able to hear him. But be certain of this: if you try to speak then He must be silent. There is no better way of serving the Word than in being silent and listening. So if you come out of yourself completely, God will wholly enter in; to the degree you come out, to that degree will he enter, neither more nor less.” Perhaps Gabriel’s judgment on the priest was medicinal, that is, Zechariah’s involuntary silence was actually an opportunity, as Tauler argues, “to come out of [himself] completely,” so that God might wholly enter in. It seems impossible that one tongue could speak both doubt and belief, dissent and allegiance. By silencing his doubting tongue, Gabriel gave Zechariah a chance to cultivate his belief and his allegiance. How much more powerful then is his witness when John is born!

Advent is winter’s Lent. To the face of Christmas abundance and extravagance we must show some measure of austerity, make some small challenge to be less full, closer to empty. When we empty self, God fills up. And the power and conviction and prophetic zeal of our witness to Christ is charged with the Holy Spirit, a fiery tongue for proclaiming the coming of the Kingdom! Live just today with this austere fast: fast from doubt, fear, anxiety, and make your hope in the coming of Christ known—word or deed, but known and known well.