The Promise of God, All in All 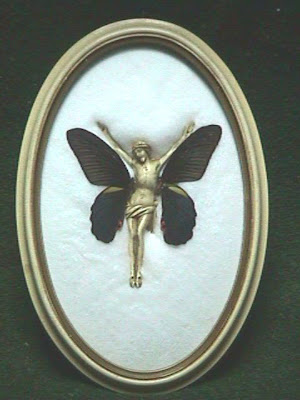 We can be transmogrified, transfinalized, transignified, transubstantiated, transferred, transfiliated, transported, and transposed. And we might even know exactly what happens to us when each of these occur. But to be transfigured somehow seems to move us—flesh and bone that we are—into the purely literary, pushing us into metaphor, not that we are speaking metaphorically but that we become that sort of figure that is changed, that sort of shaped-drawing that can be erased or redrawn. To be transfigured then is to be altered as a kind of expression, a “figure of speech” adjusted in use. No, that’s wrong. Thank God, that’s wrong! We might “trans” a “figure” when we re-write a metaphor in a poem or shift around a neat rhetorical phrase, but we do not celebrate this morning a literary event in the life of Christ. We celebrate nothing less than the revelation of the glory of God and the confirmation by Christ himself that his suffering and death would bring his faithful to the his Father’s Kingdom. The Preface of the Mass for the Transfiguration reads, “[Christ] revealed his glory to the disciples to strengthen them for the scandal of the cross. His glory shone from a body like our own, to show that the Church, which is the body of Christ, would one day share his glory.”

Keep in mind: the life, ministry, suffering, and death of Jesus is a living revelation of the Father’s plan for the completion of human history. Christ, therefore, as a person, is the efficacious revelation of the persons of the Trinity in history; he is, in other words, a “divine showing” that accomplishes what he shows.

What does Jesus show the apostles on and what does this showing accomplish? Christ’s transfiguration occurs a week after the conversation he had with the apostles about who people were saying that he, Jesus, really is. Predictably, Jesus was thought to be any one of the many prophets of the Old Covenant. Peter, however, confesses the true faith of the church, “You are the Christ, the Anointed One.” Christ then predicts his passion and death, warning his friends that they too would follow him in his suffering and glory. Rather omniously, Jesus says, “I tell you truthfully, there are some of those here who will not taste death before they have seen God’s kingdom.” The Transfiguration on is the fulfillment of that messianic promise.

Here we are in 2007. What does the Transfiguration mean now? It means exactly what it did 2,000 years ago…and more. Our Holy Father, Benedict, in his recent exhortation on the Eucharist, Sacramentum caritatis, makes an astonishing claim for the power of the Eucharist. He writes, “[In the Eucharist,]…we enter into the very dynamic of [Christ’] self-giving. Jesus ‘draws us into himself.’ The substantial conversion of bread and wine into his body and blood introduces within creation the principle of a radical change, a sort of ‘nuclear fission,’…which penetrates to the heart of all being, a change meant to set off a process which transforms reality, a process leading ultimately to the transfiguration of the entire world, to the point where God will be all in all”(SacC 11). Pope Benedict is teaching us here that the transfigurative power of the transubstantiation of the bread and wine into the Body and Blood of Christ is not limited those present for the Mass or the Church as a whole or even to all Christians or religious believers. The transfigurative power of the Eucharist extends out in fission—radiating, exuding, emanating from the center of the sacrifical offering on the altar out to the “heart of all being,” the cosmic altar of creation itself. God will be all in all.

In his second letter, Peter calls on his transfiguration revelation in support of the authority of his prophetic message: “We ourselves heard [God’s] voice come from heaven while we were with him on the holy mountain.” This then, this direct revelation, this face-to-face promise of passion, death, and resurrection is no story. He writes: “We did not follow cleverly devised myths when we made known to you the power and coming of our Lord Jesus Christ…” They were eyewitnesses to the accomplishing revelation, the efficiaous sign of our Father’s re-creating love: Jesus glorified in brilliant light, raised up and dazzling white.

We do not live according to “cleverly devised myths,” but according to the witness of the apostles and the strength of our trust in the promises of a mighty God. Out there, there is no reason to be frightened or silent, instead be “a lamp shining in a dark place, until the day dawns and the morning star rises in your hearts!” Tell everyone what you have seen.

*The figure in the pic above. . .I've been told that Jesus depicted with butterfly wings is a traditional representation of the Transfiguration. Anyone know anything more about this?