Worth the Wait, or unstick your tongue 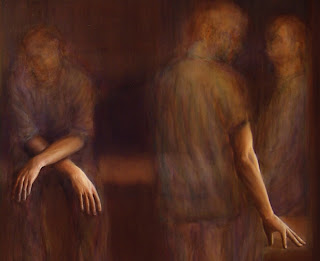 Isaiah gives us plenty of warning: He is given his name in the womb and called from birth. He is a sharp blade, a polished arrow, a servant—hiding in the shadow of the Lord’s mighty arm: waiting. This servant’s strength is the Lord’s strength. And he is made glorious in the Lord’s sight. The Lord says that he is too glorious now to be a servant, and so the Lord raises him up to be “a light to the nation, that [the Lord’s] salvation may reach to the ends of the earth.” The Lord releases him from servitude into Servanthood—no longer a slave in his body alone, he is now—raised up and released—a servant in his body and soul, a servant for us: to serve us; to teach us servanthood to show us how to kneel on the brittle back of pride; and if we are still following him, he will teach us how to obey until death and how to offer ourselves as sacrifice on a cross. Our servant is a polished blade and a sharp-edged arrow. He comes to cut our bonds and to pierce our hearts.

Then he sends another herald to tell us everything we need to know. The Christ is coming. Repent and be baptized. Our Father sends to His God-fearing children a whole world of salvation! Of course, John the Herald understood his place in this cosmic drama when he leapt in his mother’s womb during Mary’s visit while she was still pregnant with Jesus. John recognized his purpose immediately; he knew instantly that his Job in Life was only a few months behind him. John, though not the polished blade itself, polishes the blade. Though he is not the sharp-edged arrow itself, he sharpens the tip. Though he cannot save all of creation in the shedding of his own blood, he makes sure that as many people as possible know that Jesus, the Messiah, can and will. He prepares the way for the Way and dies ignobly as a martyr on the whim of a gouty king goaded-on by a scorned stripper.

argues in a sermon for today, “John…appears as the boundary between the two testaments, the old and the new. That he is a sort of boundary the Lord himself bears witness, when he speaks of the law and the prophets up until John the Baptist. Thus he represents times past and is the herald of the new era to come.” Like all prophets and priests, John is a liminal figure, that is, a person who “stands between,” reaching into both sides, fully occupying neither, influencing both, but, finally, belonging to death alone. Liminality is too hard on the faithful heart; it stretches the muscle and beats back reason—“to stand between” too long is to commit to nothing. John’s ministry in the desert, baptizing with water anyone who came forward, prepared a population for the coming of the Lord; he prepared them by setting them firmly in the doorway, right between water baptism and the coming fire of the spirit. Their liminality, our own “betweenness,” right now, today, is about waiting—patience, endurance, fidelity, and courage.

There is a sacred vigilance to our faith. That sort of commitment to truth that weights down every doubt; calms every nervous fact; holds at bay every sticky interpretation and guess, while waiting for more weighty doubt. Faith, then, is not a narcotic escape from What Is, some sort of irrational means of collapsing truths into mere beliefs; nor is faith a virtual joyride through an emotionally jam-packed church-circus. Faith is not an exercise in willful knowing or patient guessing or even our own version of trusting that someone else is right. Faith is God trusting first and then making it possible for us to trust Him. Look at David and John. God says of David, “he is a man after my own heart; he will carry out my every wish.” Of John, Paul writes, “John heralded [Christ’s] coming by proclaiming a baptism of repentance to all the people of .” John never played Messiah; he always pointed away from himself and toward Jesus: “Behold, one is coming after me; I am not worthy to unfasten the sandals of his feet.” John’s dedication to his call, his fidelity to the ministry given to him in the womb is a testimony to the fact that faith is not about believing ENOUGH. Or even believing NOW. Faith is about believing PERSISTENTLY—always, over and over; holding on to His promise; saying YES to his call; always, over and over again; being there, steady, fastened, loyal; doing his work in patience; always, over and over, one more time, over and over. You cannot believe “enough,” meaning that there is no correct “amount” of belief or faith that matters. What will name you His servant is a deep faith exercised for His glory consistently over time.

Look at Mary and Elizabeth. Do you think they were able to accept the weirdnesses thrust upon them w/o a persistent faith, an enduring trust in the Lord? Imagine if the Spirit had appeared to them on a “bad faith day” and asked the virgin to get pregnant w/o a husband’s assistance and then told the barren crone that she would be pregnant soon as well! Is there enough faith in heaven and on earth to make these ridiculous announcements appealing? NO! Mary and Elizabeth though a bit flustered never lose their composure. They know what all the priests and prophets know: deeply planted in every body and soul created by the Lord is a plan for moving forward. And part of that plan is about looking back to find out who you are, who it is that will be moving forward.

I am fully convinced that the most insidious spiritual problem facing the Church today is the lose of our sense of ourselves as Christs for one another. I think most of us “get” the idea of the Body of Christ. We belong to other clubs and groups that use similar images. We seem to get the idea of self-esteem. Though as a nation we have never been more anxious and depressed. We get success, advancement, popularity, wealth/health; and, we even get the idea of selfless sacrifice on occasion. What we don’t seem to understand as members of the Church is our identities as Christ. As Christs, we have a heritage, a lineage, a claim on the Son’s inheritance; we have a kingdom, we have eternal life. Jesus needed his herald, John, b/c he was coming into his kingdom for the first time. We don’t need heralds b/c we wake up in his kingdom everyday—not the kingdom fully revealed, of course, but the swelling possibilities of each hour reach for us and beg us to bring his throne room just that much closer. Serve one another, serve the least of his and draw that throne inch by inch closer to a terran stool, a new heaven and new earth.

John announces to the nations that our Messiah is coming. With polished sword and sharpened arrow, he will cut our bonds and pierce our hearts. One frees us from sin, the other enslaves us to Christ—the only state of true freedom! ’s obedience in freedom gave us John. Mary’s obedience in freedom gave us Christ. Zechariah’s obedience in freedom unstuck his tongue, and he gave his son a name. Each stood at a limit, a threshold, and each reached up to God. That’s not enough faith. It is persistent faith, enduring trust. And out of trust the Lord will call you to be a light to the nations! So, unstick your tongue and declare before the world the glory of God!

And be prepared to wait.